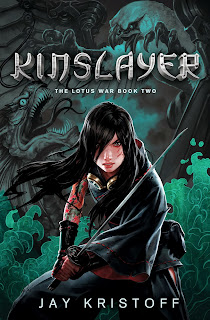 Sorry I've been so quiet this past month and a half, everyone. It's been a busy start-of-term, with provincial budget cuts leading to class-size increases, which results in more grading for me! C'est la vie...

I've been wending my way through several steampunk reads, and I have a few brief words to say about those until I get a full post done up on each:

Kinslayer by Jay Kristoff: A sequel to equal the whole-hearted endorsement I gave Stormdancer. This Fantasy-Japanese steampunk adventure series continues to captivate. This time around though, things are far more bleak. No spoilers, but if you're expecting a happy ending by the half-way point, you're a mad optimist. Don't be fooled by the YA-style cover. This one's not for the kiddies. One of my top steampunk reads of 2013.

His Clockwork Canary by Beth Ciotta: Starts with an interesting premise (the Age of Aquarius meets the Victorian era), but that premise doesn't play into the world-building as anything more than justification for technological and biological "changes" in the world. Steampunk gadgets and mutant powers the result of the psychedelic '60s? What sounded initially like a riff off of an element of Jeter's Infernal Devices, where a woman with late 20th century sensibilities tries to bed a proper Victorian man, never quite delivers on the romantic possibilities, choosing to focus instead on the fantastic ones. The sexual tension between a '60s hippy and a Victorian would have been far more interesting than two neo-Victorians, one an inventor, th other a mutant. To boot, Clockwork Canary lacks narrative tension in its first third, so I've given up on it.

By Any Other Name: The Sauder Diaries, Book 1 by Michel R. Vaillancourt: At this writing, I'm only going by first impressions, but the first chapter says a lot about most writers. If that's the case, then this is going to be a good ride on board an airship pirate ship. Vaillancourt does a great job of playing the perspective of his hero via diary against the reality of the events he is living through.  The simple line "Today I became an airship pirate" as rendered in Sauder's diary is revealed to be a matter of being press ganged, not choice. 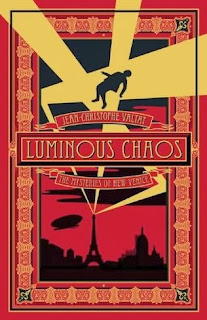 Luminous Chaos by Jean-Christophe Valtat: Much to my dismay, I never had an opportunity to finish Aurorarama, Valtat's first steampunk book. So I was very thankful to have an opportunity to read the sequel for review. I'm not yet done, but Valtat's lovely prose, coupled with a sense of the absurd, makes this one of my best steampunk reads of 2013. 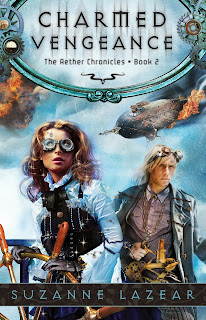 Charmed Vengeance by Suzanne Lazear: Two chapters in, and I'm already seeing the improvement I suspected to see in Lazear's writing after finishing Innocent Darkness. Lazear's fairie realm and steampunk reality are meshing much better this time around, but I still have to don fairy wings and pretend I'm 14 and female to really enjoy what's happening. I'm not the target market for Lazear's books, but nevertheless can recommend her fast-paced, steampunk-fairie-romances to the teen set, or those who are still young and heart and prone to swooning around hunky fairie princes.
Email Post
Labels: Asian Steampunk Brief reviews Novels Romance