This year was a tough one for steampunk. While precious few steampunk writers continue to produce quality work, from Gail Carriger's manga editions of The Parasol Protectorate and her new Finishing School series, Cherie Priest's ongoing Clockwork Century (of which I am two books behind - I have no doubt Fiddlehead would have been on this list given how much I enjoy Priest's books), and Mark Hodder with Burton and Swinburne sequels, new steampunk voices worth reading in 2013 were rare. By fall, I despaired of being able to construct a proper top list. Arthur Slade wrapped up his awesome Hunchback Assignments series last year with Island of Doom, and no YA steampunk series really fills the void left by Slade, Westerfeld, Reeve, and Oppel. Friends in the publishing industry have told me that the market was flooded by so much poorly-written steampunk, that the term has become somewhat synonymous with B-grade fiction. Much of what I read this year corroborated that claim; rather than give bad reviews to new authors, I chose to simply not review their work. I'd rather recommend what's worth reading than bash what isn't. The Internet is full of invective, and I'd prefer my blog not be a space that perpetuates pointless negativity. To that end, my top 5 steampunk reads are outside the big steampunk series: Hodder's The Secret of Abdu El Yezdi could easily have made the list, but if you're a regular here, you don't need me to tell you Hodder is awesome anymore: likewise Priest, Carriger, and Gilman. Instead, aside from Nemo: Heart of Ice, I chose my favorite reads that were outside the pale of popular steampunk reading. Blaylock, despite being called a legend by his marketing people, is still vastly underappreciated in speculative literature. That said, none of these are courtesy recommendations. They are genuinely awesome books, well worth your attention.

I also want to give a shout-out to Trent Jamison's Roil and Night Engines, which weren't published in 2013, but were among my favourite steampunk-related reads this year. 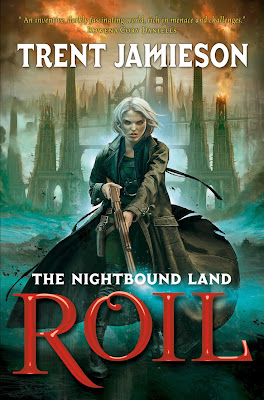 And while this marks the end of the five year journey I began in the fall of 2008, it does not mark the end of my steampunk research. I will continue to read and study steampunk, along with my other speculative interests. I owe the steampunk community a huge debt, and for that I will always be very thankful. I look forward to journeying with you all beyond the worlds of steampunk, into the larger worlds of science fiction, fantasy, and horror!
Email Post
Labels: Alan Moore Cherie Priest Gail Carriger H.G. Wells James Blaylock Mark Hodder Top Steampunk lists