The Greyfriar: Book 1 of the Vampire Empire by Clay & Susan Griffith

Here it is, Halloween, the anniversary of when the Steampunk Scholar was born, at Steamcon, one of the first (if not the first) big steampunk conventions in North America. It was two months later that I started the blog, but I reported on my adventures at Steamcon at gotthammer.com, my personal blog, as soon as I got home. So October 31 will always be the anniversary of diving into steampunk. In honor of that anniversary, here's a review that somehow got lost in the shuffle a few years back: The Greyfriar by Clay and Susan Griffith. Vampires and steampunk! 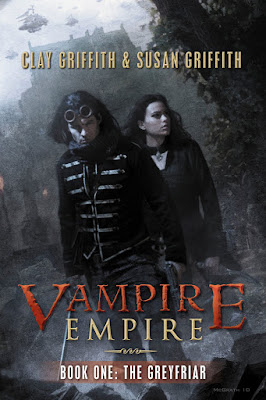 I loved The Greyfriar, the first book in Clay and Susan Griffith's Vampire Empire series. I'm getting that out of the way, so the desire to sing its praises won't get in the way of anything else I have to say about it. I'm sad it took me over a year to get to it (and then a few more years to post the review!), but thankful I had the sequel, The Riftwalker, already waiting to be read when I completed The Greyfriar.

I must confess, I judged this book by it's cover, unjustly dismissing it as the worst kind of publishing opportunism, capitalizing on both the popularity of hunky vampires and steampunk back in 2011. I was wrong. To be sure, PYR was marketing this toward a YA audience, even if that isn't the stated intent. The photo manipulated cover by Chris McGrath screams teen gothic paranormal romance with a dash o' steampunk. But when the sequel showed up on my desk, I became intrigued. While quality is certainly no requisite for a sequel in the publishing world, I grew curious as to what had prompted PYR to continue this series.

I was hooked after the first five pages. Take the world of Kim Newman's Anno Dracula, make the vampires the victors, and extrapolate a century into the future. Take that vampire cataclysm and substitute it for the meteor strike in Stirling's Peshawar Lancers, and you have a good idea of the world of the Vampire Empire series: vampires rule the northern hemisphere, and the greatest nations of the world live close to the equator, where longer days provide the protection of sunlight longer. 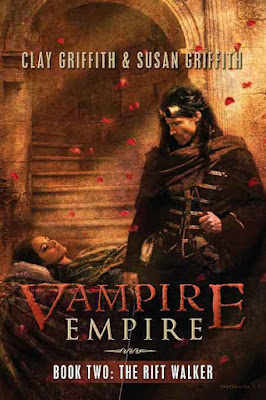 Now add a Princess gone missing in deep vampire territory, and a mysterious masked hero who comes to her aid. Mix both those familiar tropes and add some more: make the princess a very capable Chosen One, and give the masked hero a dark reason to wear that mask. Season this already well-traversed blend with the princess's arrogant fiancée, a blustering war hero from America who we love to hate, a vampire court filled with the intrigue we've all come to assume vampires excel at (just consider the vampires of the Parasol Protectorate series), and a secret cabal of magicians seeking to save the world, and you have a stirring melange of both  traditional vampire (this book has some great, gory vampire fights) and the modern vampire (he's a monster, but still pretty sexy and date-worthy).

While many would likely decry some of these ostensibly derivative moments, I think these familiar conventions are used as shorthand, not to shortchange; they convey a horizon of expectation that can later be satisfied or subverted. In some cases, the convention works toward expectations; in others, the convention gives the appearance of familiarity, but with enough surprises that one doesn't anticipate every twist and turn.
To write something even remotely fresh about attractive vampires post-Twilight is a considerable achievement. The Griffiths pull off something very clever in the polemicized fandom of fangs, giving the reader both monstrous and sympathetic vampires. Readers who love paranormal romance with bite who are looking to try some steampunk should check this series out. 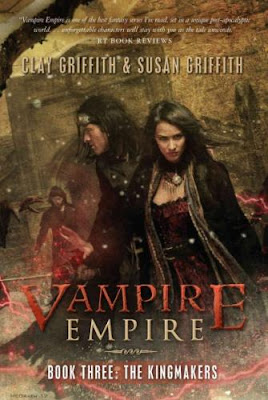 As an afterword, I thoroughly enjoyed The Riftwalker, the sequel to The Greyfriar, but found the conclusion, The Kingmakers, less satisfying. That said, Clay and Susan Griffith's steampunk take on vampires is still worthy of recommendation for its world-building and blending of previous approaches to steampunk secondary worlds. In writing this post and setting up Tweets about it, I've learned that the Griffiths have recently returned to the world of Vampire Empire with The Geomancer, hot of the presses later this week! 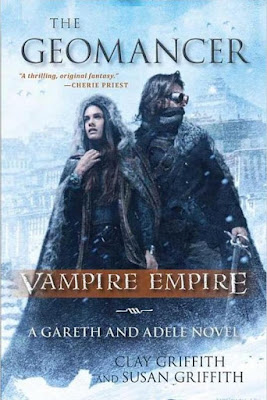