It's back! After a long hiatus, I'm finally reading steampunk again in earnest, motivated primarily by the first book on the list this year. Mark Hodder's Burton and Swinburne series restored my faith in steampunk as a genre, and I opened myself up to submissions for review again. While I missed out on some key works of steampunk like Brandon Sanderson's Mistborn: Shadows of Self and Jim Butcher's The Aeronaut's Windlass: The Cinder Spires, Book 1, I certainly read enough to form up the beginnings of a "best of" for steampunk in 2015. I decided not to finish this list until I've finished reading The Geomancer by Clay and Susan Griffith (which I'm enjoying thus far) and Gail Carriger's Prudence, which has been an enjoyable romp on par with her earlier Parasol Protectorate books. But here's the list so far, for those who have missed having me around to help avoid the pitfalls of steampunk reading. 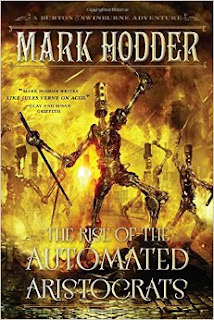 1. Rise of the Automated Aristocrats by Mark Hodder
If this is the first you've ever heard of Mark Hodder's steampunk novels, you need to go check out books 1-5 before taking on this final installment in one of the best steampunk series in print. I re-read the first two books in the series, and then read my way through the intervening volumes I've missed over the years. While Rise of the Automated Aristocrats is not the best of that series, it does a fine job of wrapping up all six books, while continuing to play the game Hodder started in book 4, when he kept the series running by imagining another timeline with another Burton and Swinburne, along with variant versions of the rest of the characters fans of this series had come to love. The stakes are high, and there are bittersweet losses, but it's a very satisfying conclusion, and one of the few steampunk novels I've read that can lay any serious claim to being called science fiction. Unreservedly recommended, along with all of the books in this brilliant series. 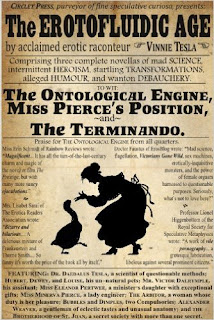 2. The Circlet Press Steampunk Bundle: Four Full-Length Novels & an Anthology by Vinnie Tesla, Petter Tupper, et al.
I reviewed Peter Tupper's lovely steampunk erotica The Innocent's Progress years ago when it was first released, and gave it high praise. This year, I read Vinnie Tesla's The Erotofluidic Age, and found myself jumping from arousal to unrestrained laughter throughout. Circlet Press releases some of the best science fiction and fantasy erotica out there. In my experience (and reviewing steampunk books, I've read more than I ever thought I would), I know no better. I have not read all four books in this bundle, and while the individual books were released in previous years, I wanted to give them the attention they deserve since they've been re-released in this very affordable bundle as eBooks. If you like your steampunk steamy, you will not go wrong with Vinnie Tesla and Peter Tupper. Their erotica is far more than sex with gears slapped on. It's smart speculative fiction about a crucial part of the human experience. In Tupper, it's serious and poignant. In Tesla, it's over-the-top funny, and both are well worth a read.

3. The Art of Assassin's Creed Syndicate
I love Titan Books' art books, and own several, but The Art of Assasssin's Creed was a pleasant surprise when I was sent it for review. Steampunk cosplayers will love the design work in this book for costume ideas. The book is obviously influenced by previous steampunk expressions, but I can say with confidence that it also takes the aesthetic in new directions. There isn't a page in this book that isn't glorious in some way or another, be it a great character design or a panoramic painting of nineteenth century London. 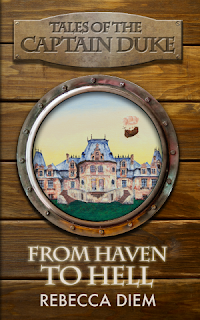 I also want to give an honorable mention to Rebecca Diem's From Haven to Hell, which is the second book in her Tales of Captain Duke series. I had stated on Twitter that I was no longer taking self-published works, since many of them are so poorly written that they are unreadable. It had become a waste of my time to wade through all the requests I was getting to review books I had no interest in reading. But Rebecca made a plea, asking me to check out her series, which begins with the very entertaining Stowaway Debutante, and I'm happy to say that I'm glad I took her up on it. While Diem's writing chops betray some beginner's flaws, she isn't a bad writer, and her prose is clean and concise in a way that a good page turner should be. Her steampunk world is bright and vibrant, and her characters are brave adventurers who don't have a million flaws (at least, not until you get to book two...). They are a throwback to a simpler time, and in that respect, will likely appeal to young readers, and readers who are young at heart. Nevertheless, while I can't recommend it as the best steampunk I read in 2015, I can say without reservation that it's some of the best indie steampunk I've ever read, and I would recommend her to readers looking for high adventure in small packages. One of the great attractions of Diem's books is that they are short, and consequently really great for young readers who may not be up to the challenge of massive wrist crackers. If nothing else, check out Diem while she's still indie. If this is what she writes like without an editor, she's going to do very well if she ever goes pro.

I'll update the list as soon as I've made a decision about the final two spots. But I'm back, people. I'm really back this time.
Email Post