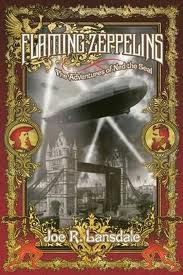 One of the latent benefits of steampunk's current popularity has been the publishing push to re-release out-of-print classic steampunk. Later this year, Angry Robot Press will be providing us with two of the seminal steampunk works by K.W. Jeter, Morlock Night and Infernal Devices, in a gorgeous omnibus featuring splendid cover art by the inimitable John Coulthart. Coulthart's the man for the job when it comes to putting covers on these, to use Jeter's words, "gonzo" Victorian fantasies, as they combine so many disparate elements it would be hard to choose one to encompass them all. Likewise, Coulthart's style proved the right choice for Flaming Zeppelins: The Adventures of Ned the Seal, Tachyon's re-release of Joe Lansdale's Zeppelins West and Flaming London, originally published as limited editions from Subterranean Press. Who else but Coulthart could combine Mark Twain, Buffalo Bill Cody, an Edisonade steam-man, dirigibles, and London in flames with martian tripods in the distance, without it becoming cumbersome and ungainly? Likewise, who else but Joe Lansdale could combine all those things along with a grocery list mash-up of pop-culture, classic literature, and to quote Kevin Smith, "dick and fart jokes"?

I've already reviewed Zeppelins West, the first half of Flaming Zeppelins, so I'll focus my attention here on Flaming London. While Zeppelins West ended with what seemed the demise of Ned the Seal, Flaming London is quick to correct our misconception with an epigraph from Ned's writings, which one can hear read by Lansdale himself, among other excerpts, here. The first chapter following the epigraph demonstrates the wild tone swings Lansdale regularly engages in, moving from the voice of Ned the Seal to a tribute to the opening chapter of H.G. Wells's War of the Worlds. The Martian attack is rendered with the same sense of  impending doom as in Wells, but before we can take the material too seriously, Lansdale spends the next four chapters chronicling Ned the Seal's rescue by a down-on-his-luck Mark Twain visiting his friend Jules Verne. The following scene exemplifies Lansdale's approach to these moments:


The seal snapped both thumbs against his flippers and made a kind of whistling sound with his mouth, then slapped both fingers against the pad and took hold of the pencil with one thumb and flipper and made a writing motion.
"Now I've seen it all," Verne said.
"Not if he actually writes something, you haven't" (21).

The arrival of the Martian cylinder is uproariously funny, even if you aren't familiar with Wells's original text, as Lansdale centers his humour on an episode involving one man "giving a play by play" to the crowd gathered around the impact crater left by the Martian cylinder:


"It's opening," said a short stocky man in the back of the crowd.
This was, of course, obvious...As there was little to see other than the cylinder, he took it upon himself to describe the steam coming out of the interior of the device, and was quick to describe it in excruciating detail, as if everyone present was blind.
"See the steam coming out. More steam than before. A lot of steam's coming out," he said.
This was true.
"Now the lid has fallen off. See that?"
Everyone saw that.
"Now there's some light. Do you see the light."
The light was pretty obvious. Red and yellow.
"There's something moving in there. Do you see the shadow?"
Suddenly, without warning, a little man in the crowd screamed something impossible to understand, leaped on the explainer and began beating him. "We see it. We see it, you dumb bastard." (27)

The attacker is incarcerated in a police wagon, but after the police experience a few moments of the explainer's penchant for the glaringly obvious, resort to violence, and free the original attacker: "Should he awake," said the officer, "one word from him, and you have our permission to finish what you started" (29). Moments like these are when Lansdale reminds me somewhat of Terry Pratchett, if Pratchett was an irascible cuss with an affection for scatological humour. The Martians pass gas, Ned the Seal passes gas, one chapter's title tells us Ned will pass gas. Lansdale loves a good fart joke.

Flaming London is filled with literary references, without any pretensions to being literature. It's a barrage of irreverent reverence for the classic SF and horror of yesteryear: as with Zeppelins West, the cast is a who's who of boyhood favorites: Wild West stories, Jules Verne, Passepartout, Mark Twain, a certain giant gorilla, flying monstrosities, Martians, as well as a few characters who cross over from Lansdale's short story, "The Steam Man of the Prairie and the Dark Rider Get Down: A Dime Novel," which many may be familiar with from Tachyon's Steampunk anthology, edited by Ann and Jeff Vandermeer. These last characters introduce the idea of rips in the fabric of time and space that have been created by H.G. Wells's Time Traveler. Unlike many instances of steampunk, Lansdale draws attention to why things aren't as they "should be," the core conceit behind Mark Hodder's brilliant steampunk series. Flaming London ends with the remaining heroes setting off from the ruins of a Martian-ravaged London to fix these fractures, and seek to set things right.

I was disappointed by the Flaming Zeppelins omnibus in only one respect: it lacks the interior art from the Subterranean editions. The lack of Mark Nelson's art from Zeppelins West is minor: it's Timothy Truman's artwork in Flaming London that strikes me as the greater loss, given how Truman and Lansdale partnered to deliver three Jonah Hex miniseries. There's something about Truman's art that suits Lansdale's text in my mind. However, that shouldn't stop interested readers from picking up the Tachyon copy - Lansdale's text, as was the case in the Jonah Hex miniseries, is the real star of the show. The images support the text, but aren't essential. On a more practical note, picking up the Tachyon version is far less expensive than tracking down original Subterranean editions from a used book vendor.

I've said it before, but it bears repeating: I do not recommend Lansdale without numerous caveats to those who like their steampunk with a sense of decorum, or bereft of below-the-belt humour, or written by a human (Ned the Seal writes a number of chapters in Flaming London; Ned's voice is funny all on its own, since he often stops talking about the matter at hand to ruminate on the joys of eating fish, or how eating fish results in awful gas). If you want your steampunk serious, sombre, or squeaky-clean, stay far away from Lansdale. For myself, he's a breath of flatulent air in the midst of steampunk taking itself far too seriously. Jeter might have conflated steampunk with the word "gonzo," but Lansdale embodies the term. 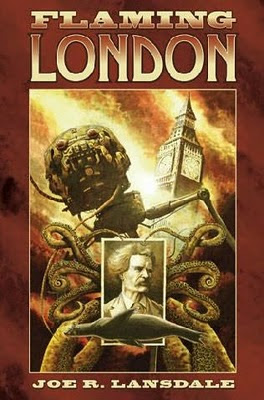