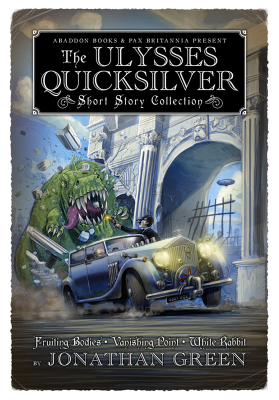 A few years back, I reviewed Jonathan Green’s Unnatural History, the first in Abaddon Books’ Pax Britannia series. I had just finished Thomas Pynchon’s Against the Day and needed lighter fare. Based on Mark Harrison’s cool cover art, I had high hopes for the Pax Britannia series, especially Leviathan Rising. I took the first two on vacation as potential beach reading. To my chagrin, Unnatural History was nigh unreadable, due largely to writing style and the lead character, Ulysses Quicksilver, with all the ruthless and rakish behavior of a steampunk James Bond, but none of the charm. On the upside, I found the second book in the series, Al Ewing’s El Sombra, much better, fulfilling my penny-dreadful/pulp fiction expectations without requiring me to ignore style and grammar. Having sampled the series, I moved on to other steampunk, promising myself I’d return to reading the remaining novels I’d purchased.

That I can make the distinction of early novels is noteworthy. Despite my low opinion of Unnatural History, Green has gone on to publish six sequels. Clearly, this series deserves another look, even if only to ascertain whether I was just in a foul mood when I read Unnatural History.

If you’re unfamiliar with the premise of Pax Britannia, it’s ludicrous but simple: Queen Victoria’s reign has persisted into the 1990s, along with Hitler’s Third Reich. While any serious student of history and culture will roll their eyes at this, it’s best to ignore how batshit improbable this premise is and let the fun ensue. Otherwise, you’ll be saying things like, “What the hell do they need a horse and cart for? They have high speed vehicles!” or “Seriously? The waistcoat and cravat are still in style?” From where I’m sitting, Green is going for an “ain’t it cool?” factor, not a “is it counterfactually probable?” one.

Read the whole article over at Tor.com!