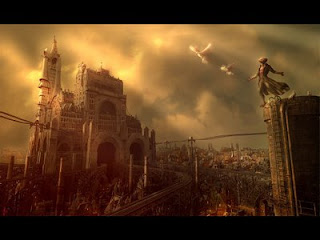 Following up my discussion of steampunk as pastiche, I’d like to explore what elements recur in works widely accepted—as well as often referred to—as steampunk. While it is counterproductive to suggest that the works Jeter was referring to when he inadvertently coined the term steampunk are not steampunk, it is also just as useless to determine what constitutes a steampunk novel outside the context of the works offered as examples of the genre by its adherents. In short, if enough fans of steampunk say something is steampunk, it should be accepted as such, and then compared with other steampunk texts (I am using the term text here in a very broad sense, as an umbrella concept to include all forms of media as well as the performative, living texts of steampunk fans at conventions or events). This is how we arrive at the idea of what makes up the steampunk aesthetic, which in turn makes us able to determine what constitutes a steampunk text. Effectively, I am suggesting that steampunk culture determines what is, or is not, steampunk. The object of my inquiry is to define what criteria steampunk culture requires of a text in order to label it steampunk.

Here is my first stab at a list of elements which go into the pastiche of steampunk. My explanations will be brief, as I’m thinking of working this whole pastiche discussion into an article to submit for publication—can’t go giving everything away here at the blog.

Neo-Victoriana: defined on Wikipedia as “an aesthetic movement which amalgamates Victorian and Edwardian æsthetic sensibilities with modern principles and technologies.” For our purposes, we will use Neo-Victorian to include the late Romantic period as well. Effectively, if it seems to have a look or feel falling between the time of the Napoleonic War and World War I, it falls within the time period steampunk appropriates as its Neo-Victorian aesthetic playground. This element is effectively the only essential item on this list, which is why I include it in my brief definition of steampunk: “Speculative Neo-Victorian pastiche.” Someone might argue that technology is also essential, but this would retroactively exclude the classic Anubis Gates by Tim Powers as part of the original canon of steampunk texts. In comparing the steampunk texts I’ve examined so far, the Neo-Victorian aesthetic is the only one which is used unilaterally. In short, if it’s not within this time-period, it is not steampunk.

Technology: Obviously, steam-technology, given our primary aesthetic element. However, steam-technology is not the only tech available to the steampunk genre. Electricity was of huge interest to the Victorians, as was the phenomenon of trans-continental communication. One of the technologies steampunk has greatly overlooked from this period is pharmacology: the advent of modern medicine. Further, Tim Powers suggested the possibility of spiritualism as an accepted science in this period (see Supernatural), so there is always the potential for technology with no basis in real-world precedents such as steam or electricity. What is important is that the technology has a neo-Victorian feel. The presence of technology cannot be entirely overlooked however, unless the setting is pastoral, given the rise of technology during this period as the era overlapping and following the Industrial Revolution.

Alternative History: This might seem like another essential, but given that there’s really nothing excessively “alternate” in terms of a moment of the break in Anubis Gates, a postulation of future history in Fitzpatrick’s War and The Diamond Age, as well as the presence of fully secondary worlds in The Court of the Air and The Alchemy of Stone, it is clearly not requisite. Almost all steampunk set in our Primary world in the nineteenth or early twentieth century must, of necessity, be alternative history, but not all steampunk is set in these periods, or even in our own world.

Rebellion (the Punk of steampunk) – a raging against the machine of industry, or the powers behind it (Whitechapel Gods). This is often expressed as a sort of post-colonial anti-Empire sentiment (Warlord of the Air, Fitzpatrick’s War, League of Extraordinary Gentlemen), but is sometimes embodied in the way the characters exist at the margins of society (The Anubis Gates, The Difference Engine, Mainspring), being outcasts or among the poor.

Orphaned protagonists – like several of Dickens’ heroes, steampunk protagonists are often born as, or made into, orphans of one kind or another. In The Anubis Gates, the hero is orphaned of his wife and his time period. Basically, steampunk heroes rarely seem to start from a point of advantage. They are closer in their makeup to Aristotelian comedic than tragic heroes (Mainspring, Difference Engine, Steamboy, City of Lost Children, Warlord of the Air, Disney’s Atlantis).

Supernatural – began to emerge in recent steampunk and was conjectured to be a late addition, but steampunk has supernatural elements throughout its history, most notably Anubis Gates but also in the repeat appearances of the golem as automaton. Consider also the cover of Extraordinary Engines, which is supposed to be a time machine: the back cover shows a keypad covered in esoteric symbols. Even the lofty Pynchon’s Against the Day contains a number of Lovecraftian homages. Let’s face it – if you can have Babbage’s difference engine work 100 years before we actually got computers, what’s a little magic between friends?

Jules Verne and H.G. Wells (the VW connection) as the godfathers of the genre, with Poe, Burroughs, Dickens, and Lovecraft as uncles. Effectively, steampunk draws upon elements of these writers’ works, either directly (League of Extraordinary Gentlemen, Morlock Night, Burning London) or as homage or latent influence. With new women writers entering the steampunk scene, we may also see an increase of Austen, Bronte and perhaps Dickinson as influences of this type as well. It should also be noted that these real-world authors often appear as characters in steampunk works (War of the Worlds: Global Dispatches, Burning London).

Time Travel – one of the ways in which steampunk often references Wells as an influence is through the vehicle of Time Travel, which is sometimes used in place of an alternate history to deliver a contemporary figure to a time where the character becomes the anachronism (The Anubis Gates). In the case of Moorcock’s Warlord of the Air, the person of the past (Edwardian era) is transported into a steampunk future of 1974.

Sense of high adventure – steampunk is whimsical, and optimistic (although sometimes that optimism is ironic, as is the case in Warlord of the Air, or Against the Day). It retains a tone of “boy’s adventure tale,” which is likely the visual significance of the ubiquitous brass goggles in steampunk costuming and digital artwork. You can’t go flying high in the sky in an airship without them. It should also be noted that the optimism of the nineteenth century continued up until the sinking of Titanic and the beginning of WWI, which is the aesthetic period we’ve already identified as the playground of steampunk.

Hollow Earth – a theory still debated in the nineteenth century is given assumed reality in a number of steampunk texts, varying in importance from centerpiece of the narrative (The Hollow Earth) to setting for the conclusion (Mainspring) to minor detour on the way to the other side of the earth (Against the Day).

Automata – steampunk loves its own brand of robot, be it golem (“Seventy-two Letters”), homonculous (The Anubis Gates), or full on metal-man (“Steampunch”).

There are a few other minor ones I’ve noted, such as fascination with Mars, some Orientalism, the Wild West, Vampires, and more recently, the comedy of manners of Jane Austen. I’ll wait to see how this list fares as I continue working through my prodigious stack of books, but again, this seems like a good place to start.

I’ve toyed with rating these elements to work on a chart/table so as to arrive at a score for individual works, but haven’t come up with a satisfactory means of doing so. My interest in doing this is to demonstrate how such a list can give us a good starting point in determining whether a text is steampunk. Consider how people will ask if Firefly or Sky Captain and the World of Tomorrow are steampunk. Both these works get ridiculously low scores when compared to League of Extraordinary Gentlemen, The Anubis Gates, or Steamboy. Feedback and suggestions for other recurring tropes or elements are very welcome.
Email Post
Labels: Defining Steampunk Pastiche