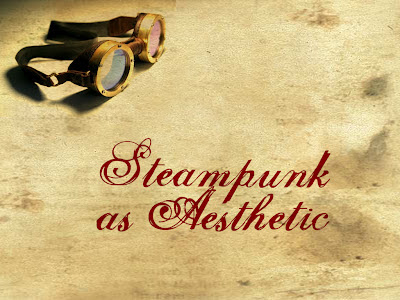 This post was originally published here, as "Defining Steampunk as an Aesthetic." As it has been the heart and soul of my research, I've placed it here to make it easy to find.

I've had the idea that steampunk should be viewed as an aesthetic since I went to Steam Powered in Sunnyvale in fall of '08. It seemed self-evident to me. Jeff Vandermeer confirmed the idea. It appeared I was onto something. Initially, I bought into a number of ideas about steampunk I have since concluded are misconceptions: steampunk is science fiction, steampunk is alternate history, steampunk isn't fantasy. After studying steampunk for nearly ten years, I'm unconvinced by any quick and easy definitions. Steampunk definitely emerged from the SF tradition. Steampunk certainly deals with aspects of alternate history. But steampunk also utilizes fantasy elements, and far more often than detractors will admit. Steampunk is sold in the regular fiction section. Steampunk movies range from B films to serious dramas. Between Thomas Pynchon's Against the Day and Dexter Palmer's The Dream of Perpetual Motion, we have very serious, literary steampunk works. And this is only the literature.

If we look outside the page and off the screen, we see steampunk being utilized in decor, fashion, music, and even as a lifestyle and political position. How can "Victorian Science Fiction" address the fashion or subculture?

I was under the impression that once I'd read Jeter, Blaylock, and Powers, I'd respond by saying, "The aesthetic has changed. It was Victorian science fiction at the outset, and now it's something else." But after I read Powers' Anubis Gates, I wondered where the science was. I figured Jeter would have it. But Morlock Nights utilized magic as much as Powers did: Merlin's in the book for heaven's sake! How much more magical could you get? Maybe Blaylock, I thought. But James Blaylock's pieces, while lacking in overt magic, would only constitute science fiction if he'd been born 160 years ago. And while I'm sure someone will argue that "steampunk is the science fiction of 160 years ago," I'll simply reply, "Yes, but then that's fantasy from our vantage point now, isn't it?" We don't believe in aether as a fuel source. We do not think Phlogiston will power a raygun. We know sky krakens do not exist.

Yet time, after time, after time, steampunk repeatedly resorts to the use of technofantasy, which in short, is when you say something is scientific and technological, but never really substantiate it, or worse yet, explain it using rules that contradict the laws of our physical sciences. Plain and simple, if your story occurs in a world where aether exists and can do the impossible, you're not writing science fiction, you're writing fantasy (or science-fantasy, for the truly anal taxonomists). Ostensibly, if I go back to the 16th century, the alchemists looking for the means of transmuting lead into gold are the precusors to modern chemists. Ritual magic is the precursor to science. We're not going to go labeling every narrative that uses ritual magic as science fiction just because it's science from the perspective of the people in the narrative. We do that, and we're letting in everything from Tolkien to Jordan into the SF fold. And while I don't have a personal stake in the matter, you can see how ludicrous the argument would become.

But I'm not arguing for steampunk as fantasy, nor am I arguing people stop saying it's science fiction. Sometimes it's one, sometimes it's the other, sometimes it's neither (when it's horror), and sometimes it's both. This is precisely why I argue that steampunk is not a genre, except to publishers who need easy categories to stick on the back cover to sell books. Steampunk is an aesthetic: a look, a style. It is not a genre, because within the literature, there is no recurrent narrative element that one can point to which appears in all, or even most, of the books.

Yes, there are airships. But not in all of them. Moorcock had them, but Powers, Jeter, and Blaylock don't. Sure, there are the goggles. But mostly on costumes and art. They are rare in the literature. No one in the League of Extraordinary Gentlemen wears goggles. Pynchon's Chums of Chance do, and Cherie Priest gave reasons for having them in Boneshaker. But they aren't as ubiquitous as one might assume.

All steampunk is alternate history, you say. No, I reply, alternate history is a genre that supposes one break in the past that changes the course of history. Most of the time (The Difference Engine being an exception), steampunk texts offer worlds that are vastly different from ours. Read Jay Lake's Mainspring to see what I mean. That's not an alternate history, it's an alternate world. And the difference is important to understanding what the hell we're talking about when we say "steampunk." Sorcery works in The Anubis Gates, and not in an Isaac Bonewits fashion. A guy floats to the moon. No Wiccan I've ever met would say they can do that. It's clearly not our world. It's fantasy.

Others say steampunk always includes "punk" characters - people opposing the established order. In Moorcock, yes. In Powers, no. In Jeter? He's got his main character protecting Christendom! That's hardly the underdog fighting the system. I've read quite a few comments lately, some of them by respected critics of steampunk or SF who have said that the first writers were more politically aware, or counter-culture than the new wave of steampunk. I cry bullshit. If Powers or Blaylock had a political agenda, they hid it so well it'll take Dan Brown to decode the text.

I could go on, but the point of all this is, I don't think appeals to etymology (the "steam" or "punk" in steampunk) work. Further, I don't think you can create a list of elements that show up over and over again in the art, the literature, or the subculture based on items like airships, anachronistic tech, etc. Something always seems to slip under the radar.

Now before anyone goes saying, "you elitist arrogant son of a bitch," for saying that I've got the best definition of steampunk ever, let me reiterate that I still like Cherie Priest's definition a whole lot. I'll also admit I'm not the first to say it's an aesthetic. Others have done that as well. And I'll add that I'm an academic. We have to be a little arrogant and elitist. It goes with the territory. You can't say things like, "I think steampunk is this, but I'm okay with everyone else's utterly biased and uninformed opinions too." If we let the "I identify as a steampunk, therefore steampunk is what I am" people have their way, we can't have a decent conversation, based upon collected data or convincing argument. The nearly two years since I identified these three features of the aesthetic have corroborated this conviction. I have repeatedly seen the merit of this approach. Others have recognized its value.

So here it is:

Steampunk is an aesthetic that mixes three features: Technofantasy, Hyper-Vintage, and Retrofuturism.

I used to say neo-Victorian instead of Hyper Vintage but I detested how the term shackled the aesthetic to a time and a place. It's Anglocentric. It was tough to find something less clunky than "nineteenth century fantastic mise-en-scene." Writing my Steampunk FAQ book for Applause books helped me settle on Hyper-Vintage as my new term. It speaks to how people who aren't steampunk purists or specialists look at anything that feels "old-timey" and say, "is that steampunk?" Vintage speaks to a past older than the atomic age, but newer than the beginning of the Enlightenment. People don't say, "that's a cool vintage sword." They say, "that's a vintage looking doomsday device."

Retrofuturism: The way the past viewed the future, or more important in steampunk, how we think the past viewed the future. The idea of steampunk anachronism is flawed, because in texts where it's a secondary world, there's nothing anachronistic about your technology. It belongs in that fabricated world. There are steampunk texts that use anachronisms (again, The Difference Engine), but it's really retrofuturism that runs across the board. Retrofuturism should be understood as more than technological: there is social retrofuturism as well, when we make the past in our image, as we do whenever a nineteenth century woman isn't slowly going crazy in a room with psychedelic wallpaper.

These three features, in combination, seem to be what constitutes the steampunk aesthetic--since Moorcock and the California Trinity, right up until now. Steampunk literature and art do not belong to the same genre, but rather draw from the same aesthetic. Maybe that's just semantics to some, but so long as we keep viewing steampunk as the stuff in the container, we're going to miss that it was the container we should have been talking about. Steampunk is the glass - and while some might not like the analogue of an empty vessel for their ostensible subculture or lifestyle, keep in mind that you can put whatever you like in that glass - art, film, or lifestyle - and steampunk it.

I will be updating this in the coming months, but for now, feel free to read my dissertation, The Steampunk Aesthetic: Technofantasies in a Neo-Victorian Retrofuture, which is the 300 page version of this idea.
Email Post