I had trouble writing this post, because I can summarize my thoughts on Hayao Miyazaki's animated version of Diana Wynne Jones's Howl's Moving Castle in one sentence: it's a steampunked fairy tale. The film is proof the steampunk is an aesthetic that can be applied to just about any narrative. However, since that isn't necessarily as self-evident as I might wish, I'll elaborate.

In his chapter "Animating the Fantastic: Hayao Miyazaki's Adaptation of Diana Wynne Jones's Howl's Moving Castle" in Fantasy Fiction into Film, Matt Kimich concedes that the film is quite faithful to the book in its first half-hour, with changes appearing only minor and aesthetic at first: "His Ingary is a steam- and electricity- powered place inspired by the look and technolgoy of the late 19th or early 20th century Europe, recalling the earlier Castle in the Sky (1986) in its allusions to writer Jules Verne and illustrator Albert Robida..." (129). Wynne-Jones's book lacks any element of the steampunk aesthetic, but rather utilizes a conventional "folkloristic, fairy-tale ontology" (130). When I read this, I wondered to myself, why does a Japanese filmmaker choose to utilize the steampunk aesthetic for a fairy tale? I had wondered the same thing throughout the film, but having Kimmich confirm that the book lacks an aesthetic focus on industrial technology confirms some of what I've been thinking. Howl's Moving Castle serves as a great case study of the elements I've identified as belonging to the steampunk aesthetic, as well as why it works so well with Howl.

I stated in my post on Steampunk defined as an aesthetic that technofantasy may prove to be one of three elements that run throughout steampunk. In the Encyclopedia of Fantasy (EF) John Grant defines technofantasy as "fantasy that has scientific/technological trappings" and distinguishes it from Science Fiction through its absence of a serious attempt at justifying the technology, or the use of magic in relationship with an ostensibly technological object. Miyazaki presents his use of the technofantasy immediately: the eponymous Moving Castle, a machine that looks like a nineteenth century shipyard was hit by the Transformer's All-Spark and then gene-spliced with an elephant and a chicken, strides through a pastoral countryside in the opening shot. The Moving Castle, while it gives off steam, cannot be said to be steam technology in the same way a Baldwin 4-8-4 locomotive is. The latter uses coal as fuel, while the former relies on the powers of a fire demon named Calcifer. This goes beyond simple impulsion: when his fire is doused or Calcifer is removed from the Castle, it doesn't merely stop moving - it loses structural integrity and is ruined. In the wake of one such ruin,, Calcifer is able to reconstitute a smaller, faster version of the castle from the wreckage.

Further, Miyazaki hasn't created a well-realized secondary world in Ingary: this isn't Arrakis, or Middle-Earth, complete with a referential history about why there's a war on, or an explanation of alternate physics justifying Howl's magical practices. These are simply taken for granted. There is a war, and Howl can perform magic. Kimmich comments on the war, stating that the reasons for it "remain as vague as the parties involved, just as it never becomes clear who is fighting whom" (133). This lack of detailed explanation about time and place echoes the fairy tale ontology Kimmich recognizes in the book. What can be recognized about the secondary world of Ingary is that it is evocative of the neo-Victorian retrofuturism I count as the second and third elements of the steampunk aesthetic. As I've said elsewhere, this doesn't mean Miyazaki is slavishly emulating London fashion and architecture in the Victorian period, but rather evoking a pseudo historical feel based in that period, and in this case, utilizing the geographic specifics of Germany in France. While I realize I'm going to start sounding like I'm beating the proverbial deceased horse, I can't underscore this enough: I'm not stating that the aesthetic requires the story to take place in Victorian London, or even during the Victorian era. Rather, the look and feel of the steampunk aesthetic evokes this period (though not necessarily the place).

However, if all it does is evoke the Victorian era, then we're in trouble of including a number of texts from outside the aesthetic: as Arthur B has stated over at FerretBrain in response to my post on Steampunk as Aesthetic: "It's no longer even an aesthetic themed around Victorian-era engineering designs taken to ludicrous extremes at that point - anything slightly weird taking place in the Victorian period gets tarred with the same brush. It's like calling Pirates of the Caribbean or The Secret of Monkey Island "piratepunk"." But Pirates of the Caribbean don't include any elements of retrofuturism (and, as it turns out, neither does Tim Powers' Anubis Gates, which Arthur B is alluding to here - thanks for throwing a big monkey wrench in my theory, Arthur!). The Pirates movies are examples of the first category of what the EF calls "History in Fantasy." These are stories "set largely in a genuine historical context and often drawing upon actual historical events, but blending those with fantasy tropes" (468). And, I must currently concede, so is Powers' Anubis Gates. I'll have to revisit that book in September, which will be focused on early steampunk (with the exception of Blaylock, who I'm devoting the month of November to). For now, I'll simply say that in disseminating the steampunk aesthetic, it must be remembered that Powers, Jeter, and Blaylock weren't building an aesthetic - they were writing novels which would become the groundwork for what steampunk is today (It might be necessary to write a chapter for my dissertation about how early steampunk inspired current steampunk, but is no longer indicative of what the aesthetic has become. We'll see: I'm just thinking on the page here). 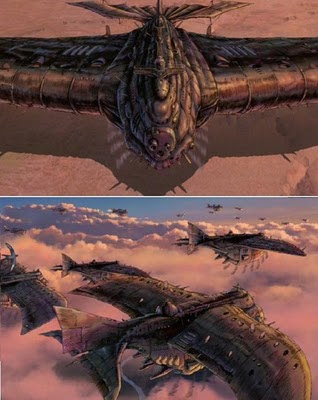 To return to Howl, the retrofuturist elements are evidenced most clearly in the battle scenes: the technology of Ingary is anachronistic for the nineteenth century look and feel of the film. The film's war sequences are hybrids of both World Wars, with massive airships and dreadnought-style battleships that never existed, but evoke a sense of the past. This type of technology has been present in steampunk precedents and steampunk itself since its inception: consider the battle from Moorcock's Warlord of the Air, anthologized by the Vandermeers in their first Steampunk anthology, or the cover of Fitzpatrick's War with its endless rain of war machines in the background. If we were to say that steampunk is a genre concerned with war, we'd only be representing some steampunk texts, but not all: there are no epic sky battles in Morlock Night, or Rucker's The Hollow Earth. Instead, what appears in all of these is some retrofuturist concept - an idea of how the past viewed the future - in the case of steampunk, specifically how the past of the nineteenth and early twentieth century viewed the future. Miyazaki's designs for the war machines of Howl fall squarely within this aesthetic delineation (For more images of the war machines in Howl like the one above, check out this post on Giant Aircraft).

So is it the application of the steampunk aesthetic that changes the themes of Howl from book to film? Kimmich argues the abandonment of the crosshatch element from the novel and the inclusion of the war Ingary is waging as responsible for the major divergence. As already noted, the steampunk aesthetic is utilized immediately, and Kimmich finds the first 30 minutes of the film faithful to the book: steampunk is not an impediment to crosshatch narratives, since Philip Pullman's His Dark Materials employs a steampunk aesthetic in Lyra's world, to good effect. Kimmich concedes the reasons for Miyazaki's rejection of the crosshatch elements as being necessary in adapting the novel to film, since the film could not create the same sense of unfamiliarity about our own world the novel achieves.

What Howl constitutes for my purposes, is a fascinating application of the steampunk aesthetic. Miyazaki's Howl's Moving Castle isn't science fiction at any level, but it is clearly using steampunk as a visual style. The narrative of the film remains a conventional "folkloristic, fairy-tale ontology" (Kimmich 130), evidenced most clearly by how Sophie's kisses at the end bring about a number of fairy-tale transformations. In short, as I stated at the beginning, Howl is a steampunked fairy-tale.

One last thought, which will render this post open-ended. In a footnote, Kimmich states that "the film stands at the end of a series of translations (and thus interpretations) from English to Japanese, from novel to film, and in the case of the dubbed version from Japanese back into English. Arguably, Miyazaki's Howl's Moving Castle could be seen as an instance of intercultural performance" (138 footnote 8). Kimmich admits this is not his focus, and while it isn't mine, it does raise a question related to the use of the steampunk aesthetic by Miyazaki. Why does a Japanese director choose to make such a significant aesthetic change to an English writer's novel, but keep it a European application of the aesthetic rather than Asian. That's a bigger question than I can answer here, and I'd like to leave it for more able hands than mine.