Warlord of the Air - Michael Moorcock 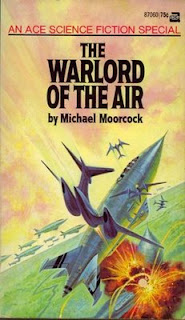 The Gatehouse cites Michael Moorcock’s Warlord of the Air as “proto-steampunk,” a useful term for the neo-Victorian speculative fictions pre-dating Jeter, Blaylock, and Powers. Given its publication date of 1971, I’ve wondered how much of an impact this first installment of the Nomad of the Time Streams trilogy might have had on the emergence of steampunk in the 1980s. While I have yet to read all of Blaylock and Jeter’s steampunk offerings, I can safely say that there is little, if any, connection between The Anubis Gates and Warlord of the Air. The book’s impact on later steampunk is more evident. The 25th century of Theodore Judson’s Fitzpatrick’s War bears a number of resemblances to the alternate 1974 of Warlord of the Air, as well as sharing a social-political subtext beneath the veneer of military adventure story.
It is of great interest that the book was published during the Vietnam War, given that some have suggested that conflict resulted due to the “end of colonialism.” I haven’t researched that historical angle enough to make any definite statement, but given Moorcock’s propensity towards political statements, it strikes me as relevant. I’d welcome input on that from the Vietnam history buffs out there.

Warlord of the Air reads well as a straight adventure story until the final chapters, where Moorcock’s political commentary switches from sub-text to narrative thrust, with a very satisfying alternate history which begs the question as to whether or not changing moments in history effectively changes anything about intrinsic human nature, or perhaps even the destiny of certain nationalities or people groups. The ending, as is the case with several moments in the book, could be misconstrued easily by someone missing the heavy irony throughout.

It is, in my mind, an easy admission to the family tree of steampunk, and not simply because it has a neo-Victorian setting, airships, and the element of time travel. While protagonist Captain Oswald Bastable begins his tale as a loyal servant of the British Empire, his journey eventually makes him an antagonist of it. Once he learns that “The Indian starves so that the Briton may feast” (94), he finds himself gaining sympathy towards the rebels within Dawn City, an “international settlement” containing “exiles from every oppressed country in the world” (105). His conversion comes as a surprise, not so much to the reader as to himself:
“I don’t know when I had come to identify myself with bandits and revolutionists—and yet there was no mistaking the fact that I had. I refused to join them, but I hoped that they might win” (122).

I was especially pleased by the way in which Moorcock delivered the impetus for the change: by making a fin-de-siècle British citizen travel through time to a neo-Victorian 1974, so that the typical modern-man-travels-into-past is turned on its head. Bastable’s manners and loyalty to the Crown are anachronistic enough to the modern reader, yet Moorcock takes the extra step of placing this anachronism within an alternate late-20th century, so that the reader, finds the familiar just as defamiliarized as Bastable does:

“And for the first time I had a sense of loss. I felt I was leaving behind everything I had come to understand about this world of the 1970s, embarking on what for me would be a fresh voyage of discovery. I felt a bit like one of the ancient Elizabethan navigators who had set off to look for the other side of the planet” (83).

The familiar is made even stranger by Moorcock’s choice of the nationality behind the rebellion: the novel’s eponymous namesake is Chinese. Again, the ties to what was occurring in global politics at the time would have made Moorcock’s novel a radical statement. It remains so, even today. The “Warlord of the Air,” Shuo Ho Ti, also known as General O.T. Shaw, strikes the reader as sympathetic in his acts of terrorism as Verne’s Captain Nemo, yet his enemies are the colonial powers, of France, America, and Britain. Unlike Nemo, who can be read as an enemy of colonialism long dead, Shaw is the enemy of colonialism still living, but under a different name.
It is this political aspect which makes Moorcock’s Warlord of the Air so valuable to the study of steampunk: if this series is proto-steampunk, as The Gatehouse suggests, then where has the political subtext and commentary gone in current steampunk?

This is not a rhetorical question, for while I am doing close readings of each steampunk text, I have only begun my investigation of the stack of books referenced as being steampunk by various sources. Judson’s Fitzpatrick’s War definitely fulfills this tradition, as does (no surprise) Alan Moore’s League of Extraordinary Gentlemen. But the rebellion of Whitechapel Gods bears little real-world subtext. Hethor Jacques’ rejection of the colonial Edwardian Northern Earth of Mainspring smacks more of Dances with Wolves than it does any commentary on colonial atrocities to indigenous peoples. This should not be construed as criticism: I am not of the opinion that all novels or stories should mean anything. I enjoyed The Anubis Gates immensely for the very reason that it really didn’t mean anything. But it is interesting to see how very concerned this particular work of proto-steampunk is, and to ask the question, is the current steampunk scene as concerned with the issues Moorcock raised?

On a more lighthearted note, I close with what struck me as a very steampunk moment, in the description of The Rover, the airship Bastable finds himself aboard following his removal from the British Airforce:

“She was battered and needed painting, but she was as brightly clean as the finest liner. She had a hard hull, obviously converted from a soft, fabric cover of the old type. She was swaying a little at her mast and seemed, by the way she moved in her cables, very heavily loaded. Her four big, old-fashioned engines were housed in outside nacelles which had to be reached by means of partly-covered catwalks, and her inspection walks were completely open to the elements. I felt like someone who had been transferred from the Oceanic to take up a position on a tramp steamer” (80).

This passage made me think of Luke walking up to the Millennium Falcon for the first time, and the idea of the hunk-of-junk airship as the more truly steampunk mode of travel.

I would also like to note how much I dislike the original cover of Warlord of the Air, which clearly panders to the popular aesthetic of sleek rocket-ship for its airships. I read Warlord of the Air in the hardback collected edition of A Nomad of the Time Streams, which also features some really wonderful artwork by Chris Moeller, acting as the hand in the sketchbook of Bastable himself. His cover for A Nomad of the Time Streams captures a number of the concepts behind Warlord of the Air perfectly, as a fleet of airships from countries all over the globe drop lines of bombs, while Bastable stands in the foreground, looking pensively into the distance, dressed all in a Red uniform evocative of British colonial militarism. 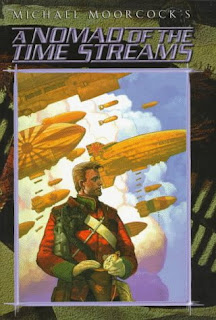