Steampunk, Ribofunk, Even if it's Old Junk, it's Still Rock and Roll to Me 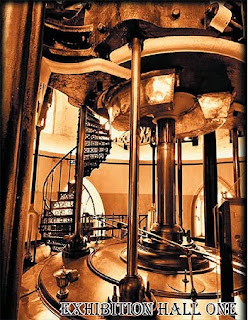 My apologies for the lack of updates through August, but I was working on a number of articles for publication. I finished up my Nemo article and sent it off the Verniana, and I heard back from the Journal of Neo-Victorian studies about my Steam Wars article - it needs revising, but it's still under consideration! Additionally, the ultimate fan-boy Chris Garcia contacted me about writing some stuff for Exhibit Hall, his new fanzine. I wrote an article for Issue One of Exhibit Hall called "Steampunk, Ribofunk, even if it's Old Junk, it's still Rock and Roll to Me." Here's an opening teaser.

I find the lyrics to Billy Joel’s “It’s Still Rock and Roll to Me” playing in my head whenever I turn to the task of working out a precise definition for the steampunk aesthetic. I keep coming back to one stanza in particular:

Oh, it doesn’t matter what they say in the papers
‘Cause it’s always been the same old scene.
There’s a new band in town
But you can’t get the sound from a story in a magazine...
Aimed at your average teen

I played in a few indie bands before I got into academia, so I often find myself mashing pop lyrics up against scholarly ideas. In this case, Billy Joel gets to come into conversation with religion scholars Carl Olson and Willi Braun. I will attempt to provide a condensed overview of the issues and problems of defining religion as argued in chapter one of Carl Olson’s Theory and Method in the Study of Religion, and Willi Braun’s articles “Religion” and “The Study of Religion and the Mischief of Curiosity.”