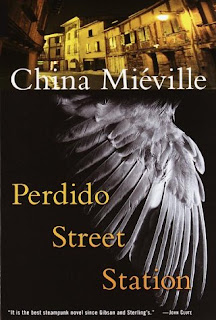 Continuing my October series of Scary Steampunk, I finally get a chance (translation: force myself despite stacks of marking) to download my thoughts on China Miéville's steampunk fantasy, Perdido Street Station.

I had taken an attempt at Perdido last year, right after finishing my M.A., but as was the case with attempting Pynchon's Against the Day, my brain just wasn't ready for anything but pure narcotic reading. When I discovered that Perdido had been released in audiobook and was read by one of my favorite narrators, John Lee, I decided to take another shot.

I'm exceedingly glad I did. Miéville's writing is beautiful filth: from the grime-infested descriptions of New Crobuzon, a city somewhere between Doré's visual renderings of London and the cityscape of Dark City and City of Lost Children, to both familiar vulgarities as well as unfamiliar profanities like "Godspit!" and "Jabber's arse!" Like Dickens, Miéville is interested in the "least of these," the people who do not sit in the places of the high and mighty: people like the brilliant but iconoclastic alchemical thaumaturgist, Isaac Dan der Grimnebulin, whose interest is in Crisis energy. While Miéville's world is easily placed under the steampunk umbrella, his world is highly original - where lesser writers are still playing with steam or aether, Miéville imagines a self-perpetuating energy source in Crisis theory.

Some of his imaginings are simply outrageous, such as the handlingers, and to some degree the Cactus people, but on the whole the feverdream world he invites his readers into is somehow believable enough to cohere, nearly operating on its own Crisis energy at times. His world building echoes Clive Barker's Four Dominions in Imajica, as does the grit and desperation of the characters. Where Miéville is, in my own mind, inferior to Barker though, is that he can't let go of the grit. His world is unrelentingly dismal, which made for a tiring read at points. The reader feels at points as bludgeoned as the protagonists, who endure great trials before coming to the end of their adventures.

But I digress. This is supposed to be an investigation of how Perdido is steampunk, or what it offers to the steampunk aesthetic. To this end, I must ask those readers who have not yet experienced Perdido to go and do so, unless they don't mind some spoilers. To the rest, I invite your commentary and discussion.

While Miéville is an eloquent wordsmith, the motivating plotline of Perdido is effectively a steampunked Aliens, Blade II, Mimic, or perhaps all three. There are monsters on the loose who are nearly impossible to stop, and that is what our heroes must do. To understand the steampunk aesthetic would mean to compare Perdido closely with these three films and identify the differences of how the Slake Moths are unleashed (through the work of Perdido's somewhat mad scientist, Isaac Grimnebulin), and then how they are dealt with (weapons, devices, allies such as the Construct Council). The reason this adventure storyline doesn't seem conventional is that Miéville is not only adept at wordsmithing, but is also a great writer of character. Every character in Perdido is richly rendered, with nuances of personality both good and bad. Any author who can make his readers connect with a hero who is severely flawed and sexually attracted to a woman with the head of a beetle must be commended at some level. While there are those who never connect with this (and many critics on Amazon do not), the overwhelming acclaim for Perdido at both a critical and popular level shows that Miéville largely succeeded. In the case of this book, you can believe the hype.

Nevertheless, for all its highbrow dystopic elements, complex characterization and ambivalent moral schema, Perdido is an adventure story: a monster hunt. The Slake Moths are appropriate monstrosities for a steampunk novel, since steampunk is pastiche patchwork of historical aesthetics. The Slake Moths are amalgams of the beasties in the aforementioned films, playing upon the indestructibility and otherness of Giger's Alien, the flight and dreamlike ability to lure prey of Mimic, and the sewer chases of Blade II. What really drove this home for me was the introduction of a party of adventurers who are hired to aid the heroes in their pursuit of the monsters:


"There were three of them. They were immediately and absolutely recognizable as adventurers; rogues who wandered the Ragamoll and the Cymek and Fellid and probably the whole of Bas-Lag. They were hardy and dangerous, lawless, stribbed of allegiance or morality, living off their wits, stealing and ikilling, hiring themselves out to whoever and whatever cam. They were inspired by dubious virtues. A few performed useful services: research, cartography, and the like. Most were nothing but tomb raiders. They were scum who died violent deahts, hanging on to a certain cachet among the impressionable through their undeniable bravery and their occasionally impressive exploits." (429)


I'm presenting on steampunk tabletop RPGs at Steam Con next week, and I couldn't help but think of the standard Dungeons and Dragons party when I read this description. And it occured to me that these are steampunked D&D heroes (some might say that's all Planescape is, but that's another discussion). If a story has characters who resemble this sort of hero, it's an adventure tale. In this case, it's a very intelligent one. One that explores the themes of otherness, shame, community, belonging, transformation, and how these all relate to moments of crisis. 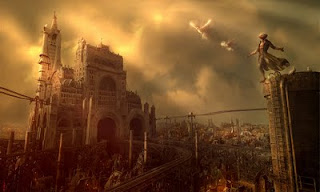 It's because of these themes that I find the ending unsatisfying. Perhaps I'm reading my own sensibilities into the text, but there came a point when I felt Miéville cheated his readers of the logical conclusion to Perdido. Again, abandon all hope of avoiding spoilers, ye who enter here. At the ending, Yagharek should have flown. Since Miéville had barred his path to acceptance into the flawed faux-family the Garuda had formed with Isaac and Derkhan, the only thing left really, was to fly. The idea behind Crisis energy had permeated the story. The level of contrivance and coincidence was quite high - the web of circumstances showed a sort of Prime Mover behind the events. The text seems to be implying its own hidden crisis engine beneath the surface. There are many occasions when the protagonist of Isaac leaps, and the net appears. I was rather convinced that in the end, it would be demonstrated that crisis energy did not need an engine to tap into it. Like Neal Stephenson's Snow Crash, I'd argue that China Miéville has refused the logical end-result of his metaphysical conceit - Stephenson can't really commit to his Baal-shem in Snow Crash, and Mieville abandons his crisis energy. Maybe I was just hoping for a happier ending, but Lin could have been restored. Yagharek could have flown. But it seems that Miéville was committed to following through with one of the other major threads/themes of Perdido, which echoes the words of Sweeney Todd in Sondheim's musical:


"There's a hole in the world like a great black pit
and the vermin of the world inhabit it
and its morals aren't worth what a pig could spit
and it goes by the name of [Bas-Lag]."


In this, Perdido is a fantasy version of the mise-en-scene of The Difference Engine: utterly distopic. From that perspective, the novel does end satisfactorily. Perhaps I just feel bad for Yagharek, seeking acceptance and grace in a world whose author will not permit it. 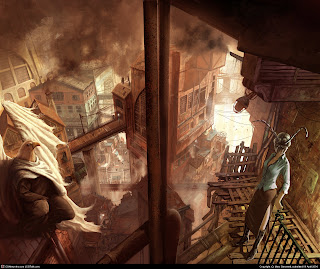