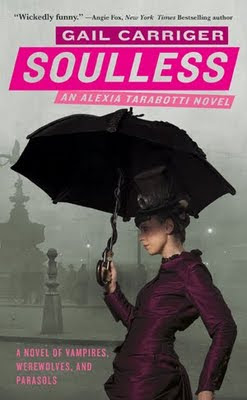 It's October, the month for ghosts, goblins, and ghosts and goblins with goggles. So this month, I'll be dealing with scary, spooky, and in the case of today's topic, somewhat satirical steampunk.

I've done a proper review of Gail Carriger's Soulless for the current issue of Exhibition Hall, but as I decided earlier this year, I'm not reviewing books here: I'm analyzing them for how they contribute to the steampunk aesthetic. When Carriger sent me an advance copy of her novel, she apologized for the lack of steampunk, by which I believe she meant steam-tech, as Soulless stands within the aesthetic boundaries I've been drawing up here at Steampunk Scholar. I'm not of the opinion that anachronistic brass Babbage Engines a steampunk story make. I often feel like I'm beating the proverbial dead horse when I say this, but if that's all steampunk amounts to, someone needs to phone up Steamcon and tell them to un-invite Tim Powers: he's out of the club.

Speaking of Steamcon, Steamcon Vice Chair Diana Vick recently defined steampunk in an interview with Tor.com as "altered history Victorian fantasy." While there's been some animated debate about the Victorian side of steampunk at Steam Empire, we might construe Victorian as less a geographical space and more as a a temporal aesthetic marker, spanning the globe. But let's save that conversation for another day, shall we? For now, let's stick with altered history, with the nineteenth century as an ontological foundation, and instead of fantasy (which limits our scope in the same way choosing SF does) let's say "speculative narrative." In this respect, Soulless fits the steampunk mold (or in Carriger's case, corset or bustle) very nicely.

Carriger's own description of Soulless is an "urbane fantasy," an alternate history of Victorian England where the monsters have come out of the closet as the alternative lifestyles. Werewolves and vampires blend in with humans on the streets and in the government of London. This isn't an entirely new concept - Kim Newman did as much when he wrote Anno Dracula. Think Underworld meets Emma, with Mr. Knightley replaced by a sexy rogue of a werewolf. And before you go dismissing Soulless as a rip-off of the currently hot Austen-meets-zombies books, think again. Firstly, I can state without reservation that Carriger had this concept wrapped up before those books came out. Second, those books are hacked up versions of Austen with Zombies crow-barred into the narrative. Carriger is 100% original.

I like having Soulless as an addition to my steampunk reading list, since it is the first ostensibly steampunk novel I've read that pays homage to the comedy of manners made famous by Jane Austen, with Molly Brown's short story "The Selene Gardening Society" being the only other example I can think of. There are certainly steampunk characters who act "properly," but none who take manners to the extreme Alexia Tarabotti does. Carriger's heroine is often more concerned with civility than safety, with hilarious results:


"This was the nineteenth century, after all, and one simply did not attack unannounced and uninvited!" (18)
"Can you imagine...the detrimental effect on your marriage prospects, to be found unchaperoned in a library with a dead vampire!" (37)
"It simply would not do to tell her mama she was paying a late-night call on a vampire hive." (81)
"The words being bandied about were getting dangerously ruse. So rude, in fact, that unless she missed her guess, actions would soon be required." (96)

And one of my favorites:


Highland werewolves had a reputation for doing atrocious and highly unwarranted things, like wearing smoking jackets to the dinner table." (132)

There are other equally hilarious examples, but to go on would be to steal some of Carriger's thunder. The smoking jacket reference is one of many wonderfully accurate and detailed descriptions of fashion, which itself has become a major aspect of steampunk culture off the page. I can imagine some steampunk fans responding negatively to an insinuation that the comedy of manners belongs in steampunk. However, if part of steampunk is to imitate, make overtures to, or incorporate some element of the Victorian era, then Jane Austen and the Bronte sisters need to be adopted as the grandmothers (or at the very least, great aunts) in the same way Verne and Wells are invoked as the grandfathers of steampunk. I'm not saying I think The Difference Engine needed an Elizabeth Bennet. I'm just saying if we admit Dickensian influences on steampunk, then let us be egalatarian enough to permit the ladies as well.

At the very least, Carriger is one of the few steampunk novelists who is an unabashed fan of steampunk. In a culture where Robert Smith of Abney Park is trying to decide if the band is really dieselpunk, when steampunk "giants" like Tim Powers can't understand how their own books are considered steampunk, and Phil Foglio refuses the tag steampunk for the far more obfuscating "gaslamp fantasy", Carriger is a refreshing change - someone who doesn't mind having her Victorian fantasy labeled steampunk. Further, she's one of the few who seem to having so much fun doing it. After all, what can be more steampunk than a female heroine in some state of passionate agitation reminding her lover that, "This has got to stop...we are in danger, remember? You know, ruination and tragedy? Calamity just beyond that door...Any moment now, evil scientists may come charging in."