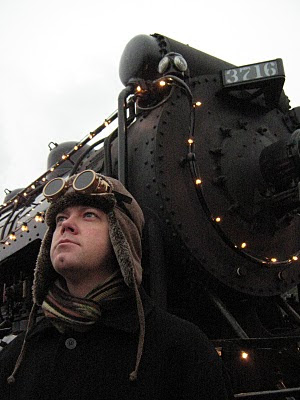 What a great first year of the Steampunk Scholar. A year ago, I was writing the first drafts of papers that are currently awaiting publication. Now I'm editing the last of them for an end-of-the-year deadline. I wish I could have updated more in November, but marking papers and exams at work kept me buried. Thankfully, I was able to keep reading, and I've got some good research findings to post for my readers in the next few weeks as I enjoy some vacation time.

Speaking of readers, I'd like to say a huge thank-you to everyone who comes by the blog. When I first started the blog, I had no idea where it would go, or where it might take me. You've made Steampunk Scholar one of the go-to sites for steampunk information. I've inadvertently become many people's one-stop-blog for opinions on steampunk literature, which has been really good for me, as it helped focus my work. Every time I thought I should be writing on the fashion (Victoria's Secret models with steampunk wings!) or the Makers (I have so very much to say about Datamancer and Jake von Slatt!), someone would link to the blog, giving kudos for talking about the literature. Apparently I'm filling a niche, though I'd argue Cory Gross was doing it first! I'll do my best to continue to bring my thoughts on steampunk writing -- feedback isn't just welcome, it's heavily encouraged, as your thoughts help me focus mine.

The notoriety of the site has resulted in some cool opportunities, unlooked and unasked for: most recent, Canada's SPACE channel is doing a spot on steampunk and I might get interviewed for it. Talk about geek heaven - getting interviewed on national television for something you love? I must add that they're looking for rabid steampunk aficianados to interview or feature. As it was put to me, they're looking for "miss or mister steampunk." So if you're a maker, a collector, a costumer, and you want someone to film you, then contact me and tell me why you think SPACE should be contacting you, and I'll pass along the most promising applicants to the show.

Another cool opportunity came from Steamcon, where I interviewed Paul Guinan. I had decided to use Boilerplate as a textbook at Macewan University in the winter semester, and contacted Paul to let him know. Well, the next thing I knew, I was writing the official teacher's guide for Boilerplate! It's great to be part of bringing great steampunk-related material like this into the classroom. I'm a firm believer that literature studies should be enjoyable, and was one of the reasons I chose steampunk as my dissertation topic.

The "Steam Wars" and "Finding Nemo" papers are still forthcoming, but the publication dates for both draw ever-closer. In the meantime, I continue to write for Chris Garcia's Exhibition Hall. I'm doing a review of the new Abney Park disc for Exhibition Hall this month, so watch for that.

As I posted in my Steamcon updates, the blog has raised the visibility of what I'm doing. At Steam Powered, I was "the guy from Canada." A year later, I'm hanging with Jake von Slatt and Nathaniel Johnstone. I spent twenty years of my life trying to make it in music, with marginal success. I was a minister in various capacities for fifteen, and have some articles and published derision of Christian right-wingers to show for it. I've been a bonafide steampunk scholar for one year, and doors just keep opening. I don't quite know what to think about that, but given that it's Christmas, it certainly has a "fullness of time" sense to it. While I regret some of the things along the path, I don't regret where the path has taken me.

Some final shout-outs to the people who have propelled this blog beyond my expectations. Thanks to: my advisor, Irene Sywenky, for extensions on a few deadlines, and for encouraging me to publish; Chris Garcia, who keeps treating me like I'm a celebrity, despite knowing many real ones; Jay Lake, whose link to my less-than-favorable review of Mainspring brought the largest number of hits to the site from a literature-related post; Jeff Vandermeer for timely advice; Jake von Slatt for encouraging my steampunk scholarship; Dru Pagliosotti and all the other steampunk scholars out there, for academic solidarity in this "frivolous" undertaking; Jha Goh for engaging debates; Cory Gross, my fellow Albertan, who keeps reminding me to keep it fun; Krzysztof, for feeding me the latest information and challenging my definitions; Gail Carriger, who keeps linking the site on Twitter; the people behind the conventions and conferences who keep having me speak; the authors who have sent ARCs (keep 'em coming!); everyone in Legion Fantastique--you are my first steampunk family; History Punk, for calling Steampunk Scholar his "new blog crush"; and of course, my wife Jenica, who has always supported my studies, but now enjoys coming along on the research trips.
Email Post
Labels: The Mission