The Ice Line by Stephen Baxter 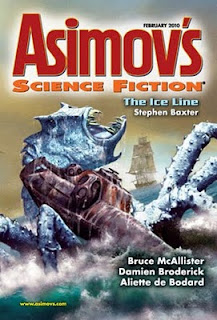 I know what some of you are thinking: isn't it Anti-Ice by Stephen Baxter? Or perhaps its sequel, "The Ice War", which appeared in the September 2008 issue of Asimov's Science Fiction? No, I'm speaking about "The Ice Line", the novella currently featured as the cover story of the February 2010 issue of Asimov's. I thought my readers would like to know, so they can go grab their own. It'll be like our "book of the month" club or something. When I've read it and am ready to report on it, I'll update this entry.

If you're dubious about purchasing it without having read any Baxter previously, you can check out this lengthy preview at the Asimov site.
Email Post