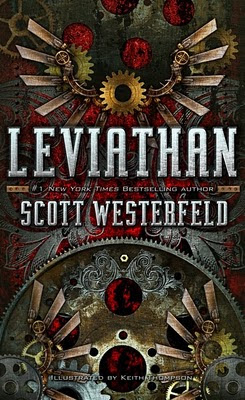 Scott Westerfeld's Leviathan was one of my favorite steampunk reads of 2009. This book is an immense pleasure in both hardback and audiobook. The hardback is a gorgeous addition to the collection of any bibliophile: the North American cover features a foil-embossed steampunk Habsburg family crest amidst other steampunk wings and floral patterns, with an organic red background, evocative of the inside of the Darwinist (British) airships. Upon opening the cover, Keith Thompson's map of Westerfeld's alternate-history Europe demarcates the opposing forces in Leviathan's struggle: On one side, the Darwinist nations of Britain, France, and, Russia, allied against the "Clanker" nations of Germany, Austria-Hungary, and the Ottoman Empire. The images he uses to convey these allegiances, are stunningly beautiful and somewhat horrifying all at the same time, grotesque in their arrangement, as well as their underlying threat of war and destruction. For someone familiar with the history of the Great War, the map provides a stunningly concise summary foundation for the opening chapter of Leviathan. Keith Thompson's numerous in-text and full-page illustrations enrich Leviathan's reading experience throughout the book.

The looming war between the Darwinists and Clankers is repeated in the opening lines of the first chapter, as  Alek, son of Franz Ferdinand, archduke of Austria-Hungary, is engaged in a war of miniature toys representing the two powers. This wargame is interrupted by the arrival of Otto Klopp, his piloting teacher, and Count Volger, his fencing instructor, who tell him to get dressed for a night lesson in piloting a Clanker walker. Alek is suspicious of this lesson in the middle of the night, with his parents away in Sarajevo. For even an amateur historian of the Great War, the reason for this intrigue is immediately evident, though not Klopp and Volger's intentions. Alek is further amazed to find that he is to pilot a Cyklop Stormwalker, "a real engine of war" standing "taller than the stable's roof, its' two metal feet sunk deep into the soil of the riding paddock" with a "cannon mounted in its belly, and the stubby noses of two Spandau machine guns [sprouting] from it head, which was as big as a smokehouse" (8). Westerfeld's use of real historical devices, such as the Spandau machine guns and the engines of the Stormwalker, developed by the Daimler-Motoren-Gesellschaft (who later developed the Mercedes-Benz), gives the novel a strong sense of verisimilitude, despite the ostensible YA audience, and the alternate history.

It's necessary for Westerfeld to create a believable secondary world, for while the Clanker devices are somewhat fantastic, the fabricated beasts of the Darwinists make the novel undeniably technofantasy. Nevertheless, the reader buys into the idea, since Westerfeld makes a slow reveal of these fabricated beasts, genetically altered animals, the result of nations in a history where Darwin's scientific discoveries of natural selection were unimpeded by conservative ideology. In Leviathan, it is the conservative groups who are derided as "Monkey Luddites":


"A few people--Monkey Luddites, they were called--were afraid of Darwinist beasties on principle. They thought that crossbreeding natural creatures was more blasphemy than science, even if fabs had been the backbone of the British Empire for the last fifty years." (31)

Westerfeld's "what if?" question seems to be, "what if Darwin had been branded saint instead of heretic?" The answer comes in stages, through the adventures of Deryn, a teenage girl masquerading as a boy in order to join the British Air Service: first, "lupine tigeresques," massive crossbreeds of tiger and wolf which are powerful enough to pull an "all-terrain carriage" (28); then, the Huxley ascender, a hyrdogen breathing organism that serves the same purpose as a hot-air-balloon, "made from the life chains of medusae--jellyfish and other venomous sea creatures" (32); before finally revealing the Leviathan itself:


"The thing was gigantic--larger than St. Paul's Cathedral, longer then the oceangoing dreadnought Orion she'd seen in the Thames the week before. The shining cylinder was shaped like a zeppelin, but the flanks pulsed with the motion of its cilia, and the air around it swarmed with symbiotic bats and birds...
The Leviathan had been the first of the great hydrogen breathers fabricated to rival the kaiser's zeppelins...The Leviathan's body was made from the life-threads of a whale, but a hundred other species were tangled into its design, countless creatures fitting together like the gears of a stopwatch. Flocks of fabricated birds swarmed around it--scouts, fighters, and predators to gather food...According to her aerology manual, the big hydrogen breathers were modeled on the tiny South American islands where Darwin had made his famous discoveries. The Leviathan wasn't one beastie, but a vast web of life in ever shifting balance." (69-71)

Aside from being a wonderful device of organic technofantasy, a brilliant contrast to the machines of the Clanker nations, the Leviathan also serves as an allusion to Thomas Hobbes' Leviathan, at least insofar as Hobbes' Leviathan speaks to the idea of the commonwealth. While the idea of Alek as a benevolent sovereign is hinted at, Westerfeld does not seem to be moving toward the idea that one sovereign ruler over a commonwealth is the ideal. Rather, through the analogy of a hydrogen-breathing airship which is both a living organism and ecosystem, Westerfeld's text suggests that the commonwealth is found, as Hobbes said, when people restrain themselves from the action of war out of the "foresight of their own preservation." One might even say that this new Leviathan is a postmodern riff on the former. The airship is a visual representation of social contract theory, wherein the lives of everyone and everything on board are connected. A balance must be maintained in order for the ship to remain in working order - this could be read both environmentally, as well as social-politically.

Westerfeld foreshadows this idea of the Leviathan as a "vast web of life" in the opening chapters: Alek makes the mental comparison of the Cyklops Stormwalker with "one of the Darwinist monsters skulking in the darkness" (8), while the non-organic metaphor "fitting together like the gears of a stopwatch" hides in the middle of the Leviathan's description when Deryn first sees it. Already, Westerfeld is subtly telling the reader that, although they seem to be at war, we cannot forget that they are all ultimately human, and that furthermore, he intends on getting at least some of the Clankers and Darwinists together to forge an alliance.
This is no spoiler: by the time this reality is reached, the text has made several references to the necessity of interaction and cooperation, of living in the "vast web of life".
Dr. Barlow, the granddaughter of Darwin, explains this web of connections to Deryn while touring the ship:


"You see, my grandfather's true realization was this: if you remove one element--the cats, the mice, the bees, the flowers--the entire web is disrupted. An archduke and his wife are murdered, and all of Europe goes to war. A missing piece can be very bad for the puzzle, whether in the natural world, or politics, or her in the belly of an airship." (195)

Dr. Barlow's use of the murder of Archduke Franz Ferdinand and his wife as a real-world example is contrasted by the dramatic irony of Deryn's statement to Alek later in the book, "Your family's no business of ours" (329). The message is clear - it wouldn't matter if Alek wasn't Franz Ferdinand's son - his family would still be her business at some level: we are all each other's business.
(SPOILER AHEAD)
When the Leviathan is forced to crash-land in the Swiss Alps, near where Alek and his companions have retreated to, Count Volger laments: "the highest mountains in Europe, and the war reaches us so quickly...What an age we live in." He concludes tjat the Leviathan's crew won't last long, due to the scarcity of food, shelter, or fuel on the glacier. Alek's response is immediate, once again underscoring Westerfeld's message of interconnection: "But we can't leave shipwrecked men to die!" Count Volger's cold reply reminds us of a lesson the world has yet to learn in terms of webs of connection, common humanity, and trust: "May I remind you that they're the enemy, Alek?" (227)

Thankfully, Westerfeld is masterful enough to weave this discourse concerning the web of connections through a rip-roaring adventure story, which is how the book is marketed to its YA audience. It can be enjoyed as such, and has much to offer fans of steampunk and alternate history. I found it far more satisfying than my painful attempts at reading Twilight. Sadly, while Leviathan's pace and content strike me as, at the very least, on a par with the writing of Rowling or Funke, the book hasn't received the success I think it deserves. This is likely due to its lack of trendy vampires or zombies. My encouragement to fans of steampunk is to give Leviathan a try. There are a number of other steampunk novels far less deserving of steampunk afficianados' attention: Westerfeld deserves some steampunk attention, and you deserve to read a great adventure story with an intelligent subtext.


Post-script: Alan Cumming's narration for the audiobook of Leviathan is as top notch as the hardback. Do yourself a favor and get both, so you can read the book while you're on your commute.
Email Post
Labels: Alternate History Audiobooks Novels Scott Westerfeld Technology