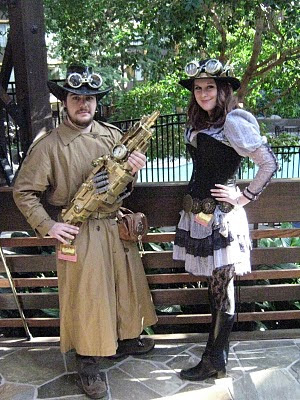 Another non-blog article for your perusal while I attend to deadlines.

This one came as the result of thinking about how different people define steampunk, and realizing they're often coming at it from the perspective of what aspect of steampunk attracts them - books, making, fashion, or art? It's by no means even remotely close to comprehensive, but here's a whimsical stab at a taxonomy of steampunks.

I’ve been thinking a great deal about diversity among steampunks. We are drawn to steampunk by a variety of attractors: fashion, literature, politics, nostalgia, etc. As with most subcultures, we often seek to make steampunk “in our own image.” In my own experience, this has meant I am often disappointed at how many steampunks have no connection to the literature that ostensibly spawned the culture. In others, it means that they are offended that steampunks have no connection to politically charged “punk” cultures.

Depending on our proclivities toward exclusionary behaviors, we esteem some (Makers are the “true” steampunks), while deriding others (you bought your costume online? How gauche!). These are only examples of course, and while they are representative of actual conversations I’ve either taken part in or been eavesdropper to, they are not meant to reflect my own attitudes. In fact, my own thoughts on the matter are far more egalitarian.

Rather than seeking homogeneity, let us celebrate the plurality which was the nineteenth century’s inheritance from the Protestant Reformation. While it might seem odd to be using “the Church” as the exemplar for steampunk, consider that the Reformation was the fragmentation of a monolithic institution into radical people’s groups (which ultimately became monolithic institutions, but that’s beside the point). The Reformation encouraged people to think for themselves, and resulted in numerous denominations, often seen as negative schisms.

If we seek to create a homogenous culture of steampunk, we are likely doomed to failure. Instead, I’d suggest an understanding of steampunk as a blanket aesthetic for a number of different applications: in other words, steampunk tribes, or perhaps to be more in keeping with the language of the culture, gangs or leagues. I playfully offer a few possible examples of such tribes, to help identify ourselves with when we gather at big events like SteamX.

Vickies: Stealing the term from Neal Stephenson’s The Diamond Age, these are the steampunks who like their anachronism neat, tidy, and served with tea. They are often steeped in real-world history. For these folk, corsets are matched with a bustle, and top hats are for gentlemen only. Accessories include canes, parasols, and a British accent.

Jeterists: Taking the name from the man who coined the term, these are the literary steampunks, the ones who’ve read at least one of the books by the original three (and if you don’t know who they are, you simply aren’t a Jeterist!), are fans of either Verne, Wells, or Burroughs (or all), and always seem to have read the
latest steampunk book before you have. They may show up at a steampunk event dressed as Fred Flintstone to underscore their deep understanding of the word anachronism.

Read the rest in Issue 7 of Exhibition Hall!

Disclaimer: In the original article, I mention Gentlemen's Emporium in my statement about online steampunk costume purchases. I hope the ironic tone of the article makes it clear that I am not being derisive about people who actually purchase items from Gentlemen's Emporium. If I had the money, I'd have bought a whole outfit from them!
Email Post