So apparently today is International Steampunk Day. Why? Near as I can tell, because someone on Facebook decided that, in addition to "International Pirate Day, Ninja Appreciation Day, Dress like a Goth Day and Mock an Emo Day," we needed an "Official Holiday" to celebrate everything steampunk. Strangely, the Facebook page says nothing about WHY June 14 was chosen as a date.

I Googled it. I wanted to know why June 14 was chosen. I read forum threads debating other possible dates, usually centered around some famous steampunk inspiration's birthday: Verne, Tesla, etc. Someone posted on a blog that it's because it's H.G. Wells's birthday, which perturbs me to no end, as, not only is today not Wells's birthday, but the man wrote scientific romances, not steampunk.  I personally think it should have been in April, which is the month in which Jeter's unsuspecting coining of the term occurred.

Someone's going to tell me I'm taking this too seriously, but...seriously! How can you have an "official" anything if you can't substantiate your reason for being official? What authority are you appealing to? Why Wells and not Verne? Why choose an author who never wrote any steampunk? Why not choose Moorcock's birthday? I don't really think the world needs another official anything day, but if we're going to impose one, shouldn't we have a better reason than, "Because the Ninjas do?"

While I'm being somewhat playful here, I'm also underscoring the reason this blog exists - to think rigourously about steampunk: to apply academic tools of theory and observation to a pop culture manifestation. But I hope I'm not just doing this off in the corner - I hope I'm inspiring others to think good and hard about whatever they're interested in. I don't think politics or religion are responsible for the evils in our world - a lack of critical thinking is. If you love steampunk, think critically about it. If you want to celebrate steampunk on a specific day, think critically about what day that ought to be. Give it some sense of tradition, or foundation. Stop talking about steampunk like it has no roots.

It's  Harry Turtledove's birthday, but he's never written steampunk...only alternate history. It's also the day G.K. Chesterton died, and for those who enjoy steampunk precedents, I recommend Chesterton's The Man Who Was Thursday. No Vernian or Wellsian tech, but it has anarchists and surreality. It's also the date of Jorge Luis Borges' death: Borges has nothing to do with steampunk, but he's one of my favorite writers, and I'd also recommend you read pretty much anything by him.

For the record, June 14, 1822, was the date Charles Babbage proposed the difference engine in a paper to the Royal Astronomical Society entitled, "Note on the application of machinery to the computation of astronomical and mathematical tables." Given the infamy of William Gibson and Bruce Sterling's The Difference Engine as a "seminal steampunk work," I can only surmise this may have been the reason for choosing June 14, but since no one seems to have posted this anywhere in the great wide Web, this is only conjecture.

As it turns out, today is also the day Superman was introduced to the world in Action Comics issue 1. I'm a much bigger fan of Superman than I am of steampunk, so I'm mostly wishing Superman a happy birthday today. Nevertheless, so as not to be a party-pooper, Happy International Steampunk Day to those of you who are observing it.

So, for your enjoyment, here's one of my favorite Sillof creations, a 'steampunk" Superman, as well as links to a number of photos and articles on DC Heroes under the steampunk aesthetic. 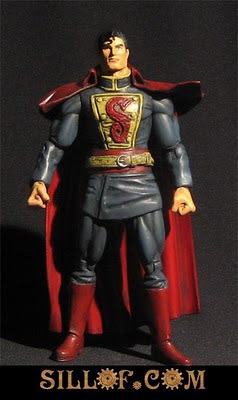 
I should also add, for my Dieselpunk and general Retrofuturist friends out there, a link to It's Superman! by Tom DeHaven, and give a strong recommendation to read it to those of you who enjoy bygone years and the Man of Steel.
Email Post