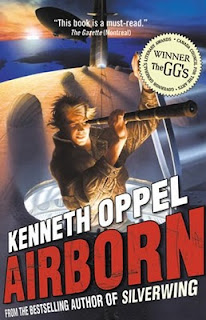 Over at the Steampunk Fashion livejournal site, macaodghain posted a well-written exploration of the "Victorian in Steampunk." While I don't agree with the contention that Steampunk is essentially Victorian, I love how macaodghain characterizes the Victorian era:


The Victorian era was a time of incredible development in terms of manufacturing, technological development, and discovery. From the Jacquard Loom (a very early punch-card-controlled device) in 1800, to the steam locomotive in 1814, to the diesel engine in 1892, and all of the various strange and wonderful things in between, it was a time of what appeared to be unlimited potential.
Steampunk poses the question, "What if that potential had indeed been unlimited?"

This seems to have been the motivating question behind Canadian author Kenneth Oppel's world-building for his wonderful young adult novel, Airborn, as well as its sequels. Airborn conveys a "golly-gee-whiz!" sense of adventure, positing an early twentieth century with a future horizon of unlimited potential instead of World War I, the sinking of the Titanic, and the Great Depression. Airborn's opening line "Sailing towards dawn" reminded me of the last line of Pynchon's Against the Day, "They sail toward grace." And if there was ever a spiritual brother to Pynchon's "Chums of Chance," it would be Matt Cruse, the boy-hero of Airborn. Matt was born on an airship, the literal reference of the book's punning title, and as a result, feels no fear while aloft. The open sky seems "the most natural place in the world" to him (14).

Unlike the airship of The Year the Sky Fell, the airship Matt Cruse serves aboard is the result of unlimited potential, of retro-futuristic imaginings: the Aurora, including cargo and passengers, "weighed over two million pounds" and measured "nine hundred feet from stem to stern, fourteen storeys high" (31-32). This makes it both longer than the Hindenburg, the largest airship to ever fly, and capable of a far greater amount of gross lift. Oppel explains this amazing engineering feat in technofantasy terms, through the invention of the fictional gas, hydrium: "There's fancy math to explain all this, of course. It had to do with hydrium being the lightest gas in the world. Much lighter than helium and even lighter than hydrogen" (32). This is what the Hindenburg could have been without concern for the cost of fuel, without the national tensions Germany faced before and during World War II. It is the Zeppelin, developed without the shadow of the Nazi party.

This is all possible because Oppel places the Aurora in a time before the cynicism and doubt the Great War produced. This is the Gilded Age, this is the time of Victorian optimism. It is an adventure tale of hair-breadth escapes--but they are always escapes. Despite the certainty Airborn shares with the Saturday matinee serials of yesteryear concerning the fate of its hero, the reader continues to turn the pages to see what happens next. For younger readers, this will be to see if the characters survive. Older readers will be savvy enough to recognize the inevitability of survival by the fact that Matt Cruse is the narrator. It is difficult to relay one's near-death adventures if one has gone beyond just being "near" death. So what would motivate an older, more mature reader to read Airborn?

Oppel himself has admitted he was surprised by the number of awards Airborn received, given that he didn't consciously seek to invest it with the same depth of Big Ideas he did in his earlier Silverwing Saga. Among the awards Airborn garnered, it received a Governer General's Award, the most prestigious of awards for Canadian literature. While taking a course on Canadian women's fiction, I read several "GG" winners, and did mental comparisons to those books while reading Airborn, trying to puzzle out why this high-flying adventure had netted such a high-altitude award.

It could have been the writing, which is both immediately accessible to the young reader, without "dumbing down" the content. It could have been the characters, with Cruse's coming-of-age story, or the cross-class romance between Cruse and the wealthy Kate DeVries. Or it might have been the way in which Airborn (and its sequels) is a hyperbolized version of Margaret Atwood's theory of Canada's "single unifying and informing" literary symbol: Survival.


For early explorers and settlers, it meant bare survival in the face of "hostile" elements and/or natives: carving out a place and a way of keeping alive...hanging on, staying alive...Our central idea is one which generates, not the excitement and sense of adventure or danger which The Frontier holds out, not the smugness and/or sense of security, or everything in its place, which The Island can offer, but an almost intolerable anxiety. Our stories are likely to be tales not of those who made it but of those who made it back, from the awful experience--the North, the snowstorm, the sinking ship--that killed everyone else. The survivor has no triumph or victory but the fact of his survival; he has little after his ordeal that he did not have before, except gratitude for having escaped with his life. (32-33)

Oppel's Airborn reads like a narrative version of Atwood's theory for young people: Cruse's expectations of life is the American Frontier, born of dreamy optimitsm; Kate DeVries acts with the certitude of the British Island, of things being firmly in their order; but their adventures require them to shatter these concepts repeatedly in order to just survive. Oppel's approach is far more optimistic than the examples Atwood cites in Survival, and Cruse and DeVries are not the hopeless victims of Atwood's study, but the thematic core of survival remains, and is in some way subverted. Oppel gives Canadian fiction a survival story that isn't as bleak as the Franklin expedition. It is a steampunk exploration of the theme of survival (limited) in a world of endless possibilities (unlimited). The back and forth of these tensions produces the push to keep reading.

Oppel not only operates at the literal level of physical survival, but also engages Atwood's idea of spiritual survival, wherein it is life itself the person fears: Matt Cruse is consistently filled with the self-doubt inherent to the early teen years, and while certain cynical readers will bemoan Cruse's hesitations and missteps of self-esteem, those who can remember will applaud Oppel's masterful rendering of Cruse's survival of one of life's greatest challenges: adolescence, the time in life when "fear of obstacles becomes itself the obstacle, and a character is paralyzed by terror" (33), largely from perceived, rather than actual threats. It is in the emotional obstacles Matt Cruse faces that older readers, nostalgically recalling their first love, first kiss, first amorous blunders and successes will press on. In addition to the mind-fields of young love, Oppel adds the quest for a father, since Matt Cruse is an orphan of sorts.

While I don't think Oppel self-consciously set out to include any intertextual references to Atwood's Survival, Matt Cruse's adventures, both physical and spiritual, mirror Atwood's "basic victim positions," moving from denial of being a victim, to acknowledging being a victim (but blaming it on a higher power), to refusing to accept the assumption that being a victim is inevitable, to becoming a creative non-victim. I'll explore these various positions in the following posts on Oppel's Skybreaker and Starclimber, with examples from Matt Cruse and Kate DeVries' further adventures.


Check out the fantastic website for Airborn, which includes a schematic "tour" of the airship Aurora.
Teachers! Go here to download a free PDF novel study for grades 6-9. 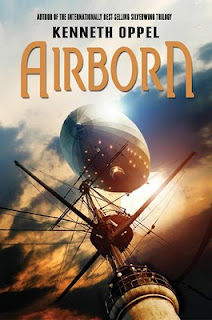