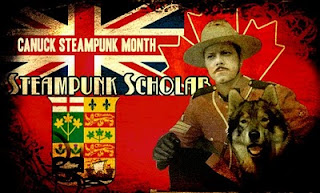 Thus ends my first full thematic month here at Steampunk Scholar. Canuck Steampunk Month was a blast for me, being able to focus my writing in a way I hadn't done previously, both because I was too busy with lectures and prep as well as getting articles written and published for journals and magazines. I loved bringing Margaret Atwood to the conversation for Oppel's books, and hopefully introducing many of you to Roger Colombo, who is one of Canada's finest SF critics. Making the discovery of Laurent McAllister's “The case of the serial “De Québec à la Lune” by Veritatus," was a joy, a revelation of an obscure piece of short fiction that fits squarely in the steampunk family. My apologies to those who were looking forward to my analysis of Karin Lowachee's The Gaslight Dogs. I have an article to finish for Locus, and a top-secret project I had to sign a non-disclosure form for, which kept me from attending to Gaslight Dogs. That said, I did start it, and I can already see how it's going to fit into the presentation I proposed to the Eaton SF conference in 2011. I'm doing a comparison of the treatment of First Nations characters in a few different steampunk and alternate history pieces. The Gaslight Dogs brings a great perspective to that table. I'm only a third of the way in, but unless Lowachee messes things up royally in the last half, I can recommend it as good reading. She's got a wonderful prose style that evokes rather than slavishly describes scenes. 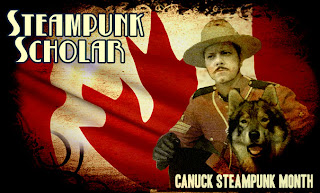 Regular visitors to Steampunk Scholar will have noted that I used a different flag in each week in the header image of the Canuck steampunk month. Each of these played a part in the history of the Canadian flag, and when I did my own research, was a bit ashamed to admit I didn't know the Canadian flag was adopted only six years before I was born! Prior to that, we flew a flag incorporating the provincial flags in a shield, and the Union Jack: the Red Ensign. So I wanted to highlight these other flags as a way of raising awareness about Canadian history. Both Cory Gross and I lament the lack of historical awareness in many steampunk circles, despite my own admission that steampunk doesn't need historical accuracy (I'd argue awareness and accuracy aren't mutually exclusive). In a lecture on symbolism, I show students the American flag and then ask them what it means - I never lack for responses: freedom, liberty, number of states, oppression, the list goes on. I then show them a slide of the Canadian flag, and ask what it means. There are few replies. They can tell me how Canada is perceived around the world, but cannot tie the symbolism to the flag. It's interesting to read the Snopes article debunking the "points on the maple leaf corresponding to the number of provinces idea," as it highlights the reasons for the lack of symbolism in the flag. Sometimes even the lack of a signifier can become a signifier! I recommend the Canadian Heritage pages and of course, Wikipedia as well for some extra flag-related reading.

In addition to the flags, I wanted to mention where I got my Mountie's uniform from. I "borrowed" it from Canadian hero Sgt. Preston of the Yukon.  I even stole his mustache. I love Photoshop... 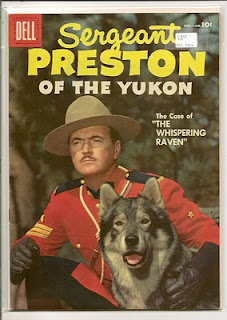 Since I didn't get to my post on Scarlet Riders either, I wanted to give a shout out to the Northwest Mounted Police and the pulp tales they inspired. Here's the stuff we didn't learn in Social Studies class: there's a whole genre of fiction called Northerns or Northwesterns, which are to Canada what the classic Western is to the United States. There was the radio series Challenge of the Yukon which became Sgt. Preston of the Yukon, both as a comic book and television series. There were films with titles like Sky Bandits, Fangs of the Arctic, and Death Hunt (which starred Charles Bronson and Lee Marvin). And while Canadian Mounties vs. Atomic Invaders sounds like a promising piece of serialized SF dreck, it turns out only to be Cold War Atomic Invaders.

Here's a page containing a list of Northwesterns for your perusal, an article on Northwestern authors, and of course, a Wikipedia entry for Northern.

Since my readers anticipated Canuck Steampunk Month, a number sent me relevant links: Many thanks to Jack Horner, who I met through The Great Steampunk Debate for passing along this Wikipedia article about the Halkett boat, which has the feel of gonzo tech to it. Jack said he could imagine the Legion of Frontiersmen using this. 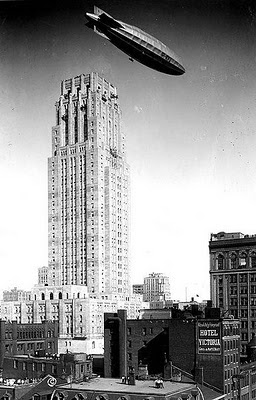 For Canuck Steampunks who dig history, here's a link to a PDF detailing the R-100 Zeppelin's visit to Canada, which you can see pictured above, flying over Toronto.

Here's a link to Edmonton author Tina Hunter's site for her flash fiction "Shiny", which features a steampunk Captain who's apparently been haunting Tina's dreams!

It's interesting to me to see how, in this first thematic month at Steampunk Scholar, the mission update evolved from "what I've been up to" to an encouragement to go and do some more reading yourself! Once an educator, always an educator I guess! That said, I do want to include a note about how great it was to move into my very own private office at Grant MacEwan University here in Edmonton. I was finally able to achieve a separation of work and home life I haven't had in a very, very long time. I work on lesson prep and steampunk research during the day, then go home. While at work, I read steampunk. While at home, I read something else. It's been refreshing. I read Emma Bull's Territory, which was mostly good despite a lackluster ending, and have been chipping away at Michael Chabon's Gentlemen of the Road, Samuel Delany's Neveryon tales, and Justin Cronin's The Passage, which is the first "buzz" book I've read in some time. I suppose as a first year English instructor I ought to know something about these Girl who Did Something Something books, but I'm too busy enjoying Cronin's riff on King's The Stand to care.

Next month we're back to a mish-mash month, with a number of varied posts about teaching steampunk, steampunk roleplaying, and of course, the usual book analyses, including Android Karenina, and a few long overdue books I read ages ago: Fitzpatrick's War, which I read the year before I was studying steampunk, and El Sombra, which I read last summer. Still getting caught up, it would seem!

Here are some new additions to the growing Secondary Sources list:


Attebery, Brian. "Introduction: The Form of the Content of the Form." Journal of the Fantastic in the Arts 20.3 (2009): 315-318. Discussion of the fictionality of history - steampunk is only briefly mentioned, in relation to Margaret Rose's article.