I attended a panel at Steamcon last fall dedicated to this topic. Having arrived late, I may have missed the meat of the conversation, but what I took in had already denigrated into one of those "what is steampunk?" conversations (and people keep riding my ass about the arrogance of coming up with a definition!). I was hoping to hear some teachers give practical advice for how to bring steampunk into the classroom, to capitalize on its popularity and cool factor. Later in the year, I received a Facebook message with a request for lesson plans or materials for teaching steampunk. Then I presented on steampunk at the GETCA convention in February (Greater Edmonton Teachers' Convention). While this won't be comprehensive, I hope it will at least spur further ideas and inspiration. If nothing else, you'll get some good links, and I've included some of my slides from the presentation.

First off, know your school and its inclinations to trying something new that may be perceived as edgy. If you think parents or administrators will balk at anything with the word "punk" in it, then just refer to it by any of the alternate terms Cory Gross enumerated in Steampunk Magazine: Victorian Science Fiction, Scientific Romance, Industrial Age Science Fiction, Industrial Fantasy, Voyages Extraordinaires and Gaslamp Fantasy." Above all, it's important that if you think of steampunk as a lifestyle, you check your propensity for proselytizing at the door -- telling kids they should adopt a steampunk way-of-life isn't so far afield from preaching a religion in school. Suggest cool DIY projects or environmentally friendly practices, but don't try to convert them per se.

From my own point-of-view, steampunk would be easiest to teach as a unit in English or Language Arts, whatever class involves reading stories. However, it strikes me that elementary teachers who are responsible for multiple curricula could do some hybrid teaching: read Kenneth Oppel's Skybreaker in English, talk about the actual history of the Edwardian period in Social Studies/History, examine the environmental science of high atmosphere travel in Science, and perhaps even make math problems related to some of the events - how much gold does Matt Cruse have left over if he drops X number of bars in his death-defying leap from the ghost ship?

I recommended a number of texts to the teachers at GETCA, based on reading levels. If you were doing a general unit on steampunk, you could have these on a "suggested reading" list. 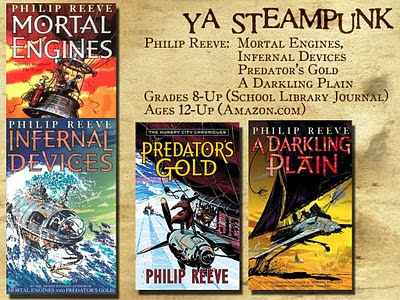 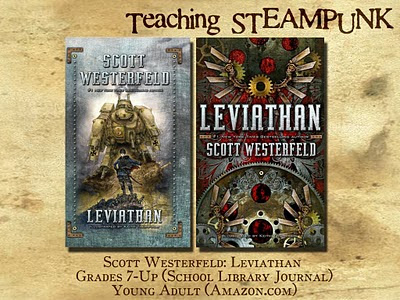 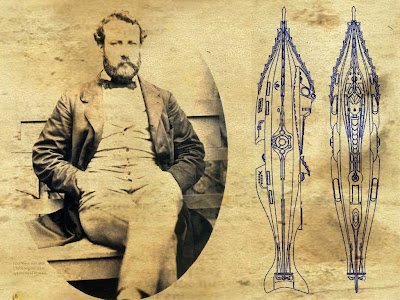 If an actual steampunk work isn't going to fly, try a classic - Jules Verne's 20,000 Leagues Under the Sea is a great book for any reading level of grade four and up (just make sure you use the "Completely Restored and Annotated Version" from the Naval Institute Press, or at the very least, the Signet Classic version translated by Mendor T. Brunetti). If you anticipate students having difficulty with the reading, try the excellent Graphic Novel version by Gary Gianni, which is a close adaptation of Verne's text. Pair that up with either Oceanology: The True Account of the Voyage of the Nautilus with its excellent mix of fiction and fact (and those gorgeous "Ologies" elements of envelopes with letters inside, holographic images, charts, and maps) or the Deluxe Classics version of 20,000 Leagues Under the Sea illustrated by Paul Wright, which tells the story in a truncated manner for younger readers, along with illustrated annotations of sea life and a beautiful cutaway diagram of The Nautilus. You could show scenes from the 1954 Disney version (don't bother with any other version except perhaps the Nickelodeon cartoon) and ask students to compare - ask what changes were made in the film adaptation. If you're really ambitious and have access to a French program, have students read certain passages in French, or if they're teens, have them read Bruno's incredible (and grim) version of Leagues, simply titled Nemo. There are a number of Verne pastiches and adaptations, both novels and short stories that could be used in a unit on Verne to broaden the reading. You could teach on the Sepoy Rebellion/Indian Mutiny of 1857, discuss Colonialism, advancements in science: for science class, you could try basic experiments related to ideas in the book. Verne's agenda was to write great stories that would teach - using them as classroom elements seems ready-made. I say that from experience, having taught Leagues in an intro English College course this past year, with very positive responses from the students. For scholarly links on Leagues, check out the amazing database at Zvi Har'El's Jules Verne Collection. If you're not interested in reinventing the wheel, Bookrags also has a decent teacher's guide for 20,000 Leagues Under the Sea.

NOTE: As I was preparing this post, I realized that I could expand on this idea of teaching a classic along with its steampunk antecedents as my monthly themes this fall, which would have the added bonus of helping me prep for class lectures. Consequently, I'll be doing an entire month on H.G. Wells's Time Machine and War of the Worlds (September), Bram Stoker's Dracula (October), and Verne's 20,000 Leagues Under the Sea (March) in the next year.
Email Post
Labels: Anina Bennett Boilerplate Gail Carriger Jules Verne Kenneth Oppel Paul Guinan Philip Reeve Scott Westerfeld Steampunk for kids Teaching Steampunk