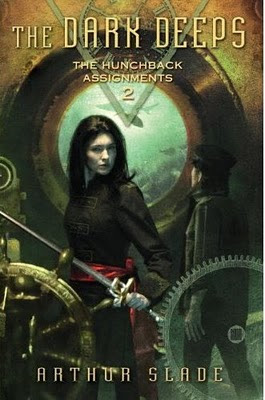 As part of his whirlwind blog tour promoting the release of The Dark Deeps, the second book in the Hunchback Assignments series, I present an interview with Canuck steampunk author, Arthur Slade.

Steampunk Scholar: When I first read the first volume of The Hunchback Assignments, it evoked numerous memories of a childhood filled with late-night re-runs of classic horror movies. I couldn’t help but think of Lon Chaney Sr. as Quasimodo in the 1923 silent version of The Hunchback of Notre Dame. I used to try and dress up as Quasimodo by stuffing a pillow up the back of my shirt, placing half a ping-pong ball over one eye, and sticking slabs of silly putty to my skin. Dr. Hyde, one of the villains in The Hunchback Assignments, references both Dr. Jekyll and Mr. Hyde and The Island of Dr. Moreau. Are you a fan of classic monsters in general?

Arthur Slade: Absolutely! And oddly enough I used the pillow/ping-pong ball/silly putty trick while I was writing the book (kidding, of course, it's hard to write with a ping-pong ball in one eye). I have been a fan of horror ever since childhood and I even watched the silent version of The Hunchback of Notre Dame again as inspiration. One of the pleasures of this series for me was that I now had a good excuse (not that you need one) to watch the old movies and read the old books again and again. From the very first I wanted this series to be an ode to the Victorian era novels that have inspired so much of our modern day horror and science fiction. To be able to return to the source (or sources) has really inspired my imagination and has made me feel like I'm a kid again--the same kid who sat petrified in front of the screen during Frankenstein. I want to capture that same feel with these novels.

SS: You’ve definitely succeeded in creating an “ode to the Victorian era novels.” Throughout both volumes of The Hunchback Assignments, you play with classic Victorian-era writers’ characters and plot lines, morphing those in the same way Modo morphs his appearance. For example, The Dark Deeps is an homage to Jules Verne’s 20,000 Leagues Under the Sea, paced toward modern readers’ sensibilities. I have to say, I love the addition of sharks in the scene that mirrors Conseil and Aronnax trying to stay alive after being thrown overboard from the Abraham Lincoln. You’re also playing a character from one of H.G. Wells’s most famous works, which again takes us into the “classic” horror movie realm (I’m not saying which one, as I want it to remain a surprise for readers). You reference Shakespeare, and Dickens’s Great Expectations, making The Hunchback Assignments a decidedly literary experience. Have you had any readers write to tell you that you got them started on reading classic works of literature, or checking out those old horror movies?

AS: Yes, the shark scene was rather a fun scene to write. I blame the inspiration to blur these stories on two things: my English degree and my love of Science Fiction and horror. At the outset I wanted to blend the "literary" side of English literature and the "fantastical" side of fiction (obviously the quotations denote my true feelings that both can and do exist in one work). I don't mean that I wanted the novels to be incredibly deep and thought provoking, but I wanted to borrow Dickens' ability to create believable characters and setting and meld that with Verne's talent for action and exploring scientific concepts. My goal was to make the world around my characters appear as real as possible. My hope was that if the readers "believe" that the setting and characters are real, then they are more likely to accept some of the steampunk concepts that I am introducing them to: steam-powered limbs and mechanical hounds, as an example. Modo really is a symbol for this "blurring." He is a lover of words, of Shakespeare and Coleridge, yet he is also an action hero trained to infiltrate organizations and to kill enemy agents.

Most adult readers of the series certainly get the literary references. The younger readers sometimes pick up on them and other times, if they are taught the book in school, get the references pointed out to them. I can't say the series had been sending droves of people to buy Dr. Jekyl and Mr. Hyde, but at least they are getting an introduction to the classics.

SS: Perhaps this is why I enjoyed the books so much, since my interests are a blend of that literary fantastic as well. On the subject of English literature, has anyone used your books in curriculum? Is that something you hope to see happen when you’re writing?

AS: The books have certainly been used in a number of schools. It does take a bit of time for books to trickle down into the education system, since teachers have to read them then, if they're appropriate, add them to the books they're covering that year or the next year. I've talked to several schools who are teaching the book and teachers appreciate being able to draw direct links to the classics. That was one of the things I had hoped would happen when I first started writing the series. Plus, in all honesty, those connections make the books more saleable to the education market.

SS: The Hunchback Assignments have been labeled steampunk. Did you write with a conscious awareness of the steampunk style in your work, or was it something that emerged as a result of the elements you’d placed together?

AS: I wrote the first book in 2007-2008 and at that time steampunk hadn't quite become a part of the greater public consciousness (especially in the young adult field). It wasn't until early 2009 when we began talking with various publishers about the marketing of the novels that the word steampunk started to be bandied about as a good label to put on the series. I was lucky that steampunk's profile was rising at the exact moment the first book came out.

As I was writing the novels, though, I was drawing from some of the steampunk I'd read earlier in my life. Also, I'd have to draw a direct line back to Verne's work. And part of the steampunkedness of the series did just emerge from where the story ended up taking me. So I guess my mishmash of an answer is that it was partly a conscious and unconscious process that inspired the steampunk elements in the series.

I define steampunk, basically, as "science fiction that is inspired by the Victorian era." But that doesn't quite cover it, either. The field keeps getting larger and larger.

SS: The Dark Deeps is definitely a direct line to Verne. Some might accuse you of just ripping off Verne, but I see it as a tribute. At the very least, we can say you're being more original than the current deluge of mash-ups that use the original text and then carve in their own ostensibly clever spin. I'd describe what you're doing as introducing readers to 20,000 Leagues Under the Sea in a way modern readers will more readily take to. I don't want to steal any of the surprises of the text by highlighting some of the ways you depart from Verne's story, but I wanted to ask about your process of deciding where to stay faithful, and where to do something different.

AS: One of my difficulties was to create a work that is inspired by 20,000 Leagues Under the Sea, not a copy of it. I think the divergence comes from melding the Verne story with the world of The Hunchback Assignments. That certainly pushed the story in different directions than if I had followed the course of the original novel--after all Modo is quite different than Professor Arronax and brings with him this whole other world of espionage, his "love" life, and his disfigurement. And, of course, he is in conflict with the Clockwork Guild, so the presence of that organization also affects the storyline. Also, my book is intended for young adults, so there isn't very much "time" to examine all the scientific tidbits that Verne so loved. I really just wanted to capture the feel of the Verne novel, which I hope I've achieved.

SS: You've certainly achieved the adventure "feel" of the Leagues without Verne's scientific "info-dumps", which many modern readers find cumbersome anyhow! That's one of the strengths of The Dark Deeps, as I think this interview demonstrates: on the surface, The Dark Deeps is an engaging steampunk adventure story with elements of humour and romance. Beneath that veneer, in the deeps between the lines, it's a treasure trove of signposts leading to classic monster movies and literary masterpieces.

As with other stops along the way, Steampunk Scholar was provided with two ARC copies of Arthur Slade's The Dark Deeps: Volume 2 of the Hunchback Assignments to give away to my readers. To enter, simply leave a comment about your favorite classic monster, and why you love them: Dracula? Frankenstein's Monster? The Phantom of the Opera? Even though I know it's been awhile since Jason and Freddy stepped onto the horror stage, they don't count! It's got to be from pre-1960, film or text. I'll put all the entries into a hat and let y'all know who won next Thursday!