"The Idol's Eye" by James Blaylock 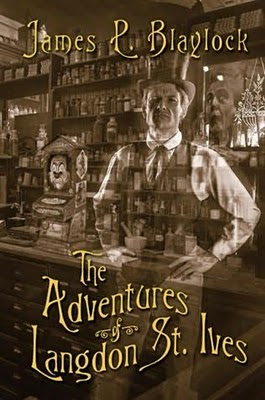 I wanted to crack off another post before Steamcon II - I've been re-reading Blaylock's works furiously, but I got distracted from his steampunk writing by Paper Grail, the first book in his "Christian" trilogy. I also started All the Bells on Earth as a warmup to the holidays, and got lost in it immediately - it's amazing what reading a work many years later (or should I say older?) will do. So despite loving Homunculus, it will have to wait for next month. I've decided that I'm not going to bind myself to a timeline with my themes. I'll work through each one to its end, and not concern myself with getting it done in a month's time. I simply don't have the leisure to do that.

This post is less about the content of "The Idol's Eye" than it is its overall tone. Published in 1984, this short story introduces Ignacio Narbondo to the Langdon St. Ives series. "The Idol's Eye" wasn't the only appearance of Narbondo in 1984: he shows up as the ancestor of one of the oddball characters in Blaylock's contemporary novel, The Digging Leviathan. A number of other St. Ives names are included in The Digging Leviathan, including Hasbro and William Ashbless, the recurring fictional poet invented by Blaylock and Tim Powers. I'll talk more about the way Blaylock doesn't seem terribly concerned with strict continuity insofar as his characters when I post on The Digging Leviathan.

What I wish to focus on instead is the transition of reading "Ape Box Affair" and "The Hole in Space" to reading "The Idol's Eye." The whimsy is still present: in the middle of a tropical rainstorm, narrator Jack Owelsby notes that Professor Langdon St. Ives, the hero of Blaylock's steampunk tales, manages "through a singular and mysterious invention of his own, to keep his pipe alight in the downpour" (47). The sense of adventure and exploration from "The Hole in Space" is still here as well, as demonstrated in a passing reference to that earlier story:


Roundabout twenty years back, then, it fell out that Priestly and I and poor Bill Kraken had, on the strength of Dr. Birdlip's manuscript, taken ship to Java where we met, not unexpectedly, Professor St. Ives and Hasbro, themselves returning from a spate of very dangerous and mysterious space travel. The alien threat, as I said before, had been crushed, and the five of us had found ourselves deep in cannibal-infested jungles, beating our way through toward the Bali Straits in order to cross over to Penguinman where there lay, we fervently prayed, a Dutch freighter bound for home. (46-47)

Yet this sense of adventure and whimsy is tempered by a darker tone, one that anticipates the darkness of some of Blaylock's later works. The mix of humour and horror is found in The Paper Grail, which jumps back and forth between laughter and tension. A banal early-morning walk in the woods culminates in the discovery of a junk pile in a clearing that seems initially benign, until the walker notices "[t]here was something about the way the fenders were tilted together . . . as if they were meant to form a little shrine" (102). While there is nothing literally frightening about the junk pile, the way Blaylock builds to this scene caused a shiver to run up my spine, as it evoked a memory of The Blair Witch Project or darker moments in Twin Peaks.

In All the Bells on Earth, there isn't a trace of whimsy to balance against an early scene of terror, when a man enters the sacristy of a Catholic church, his face hidden by a "rubber mask that resembled the face of a goat, complete with a protuding rubber tongue, curled-back horns, and a tuft of coarse hair" (5). While the image alone is somewhat ludicrous, the build to this intrusion has been all heimlich and hearth, a warm moment of reflection on the part of Father Mahoney, the church's priest. The appearance of a man in normal clothes wearing what is clearly a Baphomet-style mask in a Catholic church is creepy: Bad Things are about to occur, and they do.

The dark tone of "The Idol's Eye" is less chilling, but remains a stark contrast to the upbeat playfulness of the first two Langdon Ives stories. It has the feel of a well-told ghost story, with its frame narrative on a dark and stormy night, the recollection of an expedition into dark jungles, and echoes of curses upon those who pillage sacred treasures. It isn't scary in the way Algernon Blackwood's The Wendigo is, though it shares affinity in style with that early 20th-century work of horror.

What it demonstrates is the diversity of Blaylock's writing. To read his steampunk works is only one facet of his ability - unlike many writers who get pigeonholed into one genre of fiction, Blaylock's writing resists uniform classification. His part in the beginnings of steampunk in North America is unarguable: yet there's a great deal more to his writing than just the St. Ives stories - the darkness in "The Idol's Eye" is a shadow of things to come: Homunculus will delve further into the shadows, and for those interested in darker fare, they'd be well-rewarded by a detour from Blaylock's steampunk works to try some of the "Ghosts" trilogy, or the other works I've mentioned.

I'll be discussing as much with Blaylock this weekend at Steamcon, and I'll let you know what I find out. To those who will be there, make sure to come by and say hi: it's always good to meet the readers.
Email Post
Labels: James Blaylock Scary Steampunk Short Stories Whimsy