All the Bells on Earth by James P. Blaylock

Many people complain of Christmas being over on December 26. Coming from a church background, and having researched a number of church calendars, I've taken great comfort in extending the holiday season to its traditional end on January 6. A number of Christian denominations celebrate Epiphany, or the visit of the Wise Men on this date, and so I'll simultaneously close my string of seasonal posts while bridging back into our study of James Blaylock's steampunk with All The Bells On Earth. 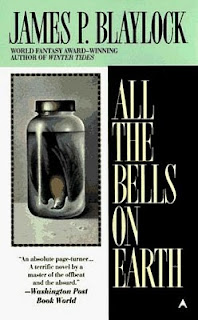 This is not a steampunk book - it's a Blaylock book, filled with a cast of quirky characters occupying a very normal narrative space, engaged in conflicts that are simultaneously banal and transcendent. At both The Nova Albion Steampunk Exhibition and Steamcon II Blaylock admitted low-key Inkling Charles Williams as a strong influence and inspiration (March & November, 2010). This is apparent in both of the other books in what wikipedia dubs Blaylock's "Christian" trilogy: The Paper Grail, The Last Coin, and All the Bells on Earth. Williams wrote "supernatural thrillers," making him the ostensible horror writer of the Inklings. His novels are theological in nature, but not in adherence to any strict systematic theology. Williams was adventurous with the theological musings in his fiction, pairing Christian motifs and ideas with the Occult: ghosts, the Tarot, the Philosopher's Stone. Where many Christian writers would fear to tread, Williams went dancing.

Reading Blaylock's so-called Christian trilogy is like reading Williams, if Charles Williams were from California and had a sense of humour. All the Bells on Earth shares a key concept of Williams' writing, best identified by Thomas Howard in his excellent study, The Novels of Charles Williams:


"Eliot spoke of the 'fear in a handful of dust,' referring to the enormous and alarming significance of the most ordinary things ... The ordinary stuff of our experience seems both to cloak and to reveal more than itself. Everything nudges our elbow. Heaven and hell lurk under every bush. The sarcastic lift of an eyebrow carries the seed of murder since it bespeaks my wish to diminish someone else's existence. To open a door for a man carrying luggage recalls the Cross since it is a small case of putting the other person first. We live in the middle of all this, but it is so routine that it is hard to stay alive to it. The prophets and poets have to pluck our sleeves or knock us on the head now and again, not to tell us anything new but simply to hail us with what has been there all along.
If ever there was anyone who saw the fear in a handful of dust it was Williams. There was no detail of life, no bodily function, no chance word, no bird or bush, no kiss or shaken fist that did not signal Everything to him. Like all poets he saw a correspondence between commonplace things and ultimate things. Everything supplied him with parables and images.
An image points to something beyond itself. The wave of a hand is a an image of greeting, which is itself one aspect of courtesy, which in turn is a subdivision of Charity. The shake of a fist is an image of animosity, which is one aspect of anger which is one of the Seven Deadly Sins. Everything keeps rising towards heaven or plummeting towards hell. The whole conflict of heaven and hell crops up at our elbow a thousand times a day."

The conflict of heaven and hell is clearly the business of the characters in All the Bells on Earth. Some are more aware of this than others. Three powerful businessmen who sold their souls to the devil are keenly aware, as one by one the price of their success comes due. In an attempt to thwart the Faustian bargain, one of these men procures a literal Bluebird of Happiness, which is delivered wrongly to the house of Walt Stebbins, a very ordinary mail-order businessman. Walt's a bit of a loser: he's never succeeded financially, and relies upon the income of his Realtor wife; she wants kids, and he doesn't. He's about as normal a protagonist as one could find, and with the arrival of the Dead Bluebird in a Jar, he's thrust into the midst of the conflict between darkness and light, good and evil, hell and heaven.

We've seen this story before. However, instead of setting off on a quest for Mount Doom, or protecting the Virgin who is to be Satan's consort, or finding all Seven Seals and Bowls of God's apocalyptic wrath, Walt Stebbins is faced with a very simple problem. The Bluebird will grant any wish he makes. To thwart evil, he merely needs to throw the damn thing away. As one character remarks when Walt ponders the possibility of wishing for a million dollars, "What if there's ten million dollars in it. It'll buy you the same thing--ruination. A ticket straight to Hell in an upholstered sedan chair. Bank on it. You'll ride to the Devil in comfort" (196).

But Walt doesn't throw it away, and while he makes up his mind about what to do with it, the struggle between good and evil goes on in very normal ways, cropping up at Walt's elbow "a thousand times a day." He has to deal with the inconvenience of family visiting for the holidays: his wife's Uncle Henry and Aunt Gladys, parked in their  motorhome on Walt's driveway, evoking shades of Randy Quaid in Christmas Vacation. Gladys puts everyone on a nuts-and-grains diet at the time of the Turkey, and Uncle Henry doggedly tries to rope Walt into a get-rich-quick scheme involving a Pope-on-a-Rope, all the while carrying on adulterous liaisons with a woman who works the counter at a donut shop. When Uncle Henry seeks to end the relationship, the woman threatens to reveal Henry's infidelity to his wife. In the ensuing confrontation and placation of the spurned Other Woman, one of the two clergymen aware of the struggle, and actively engaged it it, reflects, "I came around this afternoon looking to enlist the two of you in this affair of mine, didn't I? I thought I was up against a pretty formidable dragon, but now I'm inclined to believe that Maggie Biggs gets the brass ring" (244). Not cosmic evil, but the petty, larcenous variety. Petty evil that is met with mundane charity. Walt stubbornly bails Henry out of the situation with Maggie Biggs, through small, mundane acts of kindness, the opening of a door recalling the Cross - the waved hand signifying greeting, courtesy, and ultimately Charity.

Other family show up uninvited and nearly unannounced when Nora, Walt's wife, brings her sister's kids home: the sister has gone off to find herself, and the father is an abusive alcoholic. While Walt states he doesn't want kids, he warms up to these, and finds himself drawn into the role of father to them before long. While the confrontation with the abusive brother-in-law is tense, the actions are once again mundane. This is an everyday act of kindness, not a stand-off with a Balrog over the abyss. When Father Bentley, the clergyman in the thick of the spiritual fray chooses a more direct and violent approach to fighting evil, he finds himself "sickened and ashamed," since his nemesis didn't defeat him: "he saw that clearly -- he had defeated himself" (329). Ultimately, it's another act of everyday goodwill that brings the struggle between heaven and hell to its conclusion - Walt will invite the outcast in from the rain, obeying once again the ethic Jacques Derrida spoke of  in "Hospitality, Justice and Responsibility":


"...unconditional hospitality implies that you don't as the other, the newcomer, the guest, to give anything back, or even to identify himself or herself. Even if the other deprives you of your mastery or your home [as Walt's guests effectively do], you have to accept this. It is terrible to accept this, but that is the condition of unconditional hospitality: that you give up the mastery of your space, your home, your nation ... I try to dissociate the concept of this pure hospitality from the concept of 'invitation'. If you are the guest and I invite you, if I am expecting you and am prepared to meet you, then this implies that there is no surprise, everything is in order. For pure hospitality or a pure gift to occur, however, there must be an absolute surprise. The other, like the Messiah, must arrive whenever he or she wants." (70)

The outcast, the other, the one in need of hospitality, is conflated with the Messiah in both Derrida and Blaylock. When Walt invites his enemy to his home, it is because his enemy has effectively turned up on his doorstep, wet and bedraggled with nowhere to go:


"Come on over to our place," Walt said, although he realized that he didn't like the idea of an evening with Robert Argyle very much at all, which he knew was uncharitable. He'd have to work on that. Probably there would always be something to work on...
"Plenty of room at the inn," Walt said. "It's Christmas. It's the best time of the year to let bygones be bygones. We might as well start tonight." (375)

I know I've given away the ending here, but that shouldn't deter you from the journey. Christmas is coming to a close, but there's always next Christmas to get a used copy of All The Bells on Earth through an online book vendor like Thriftbooks. It's worth checking out, for a quirky battle between good and evil in the town of Orange California. Merry Christmas, everyone.