Getting "Steamed" about the steamy in steampunk 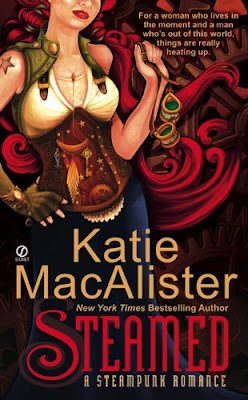 Color me surprised then, to find my readers somewhat divided in their appreciation of this past month's content. Granted, I went more for erotica than romance, but this was primarily because I got in more reading on the iPhone than I did off hard copies. All the erotica I had to read was sent to me as eBooks, so I got through that quicker, and was able to write about it sooner than the romance.

But it was interesting to see yet another facet of steampunk where people want their steampunk a certain way, and don't like it when it deviates from that model idea. This is the heart of my response to Katie MacAlister's Steamed, which generated some controversy in steampunk circles with its unlicensed use of steampunk images for a book trailer, and was derided as being written by someone from outside steampunk who looked in on steampunk from the outside. Again, as I commented in my post on Steampunk Erotica, this sounds a lot like religious rhetoric: Salman Rushdie's Satanic Verses and the Islamic community, writ small. My dislike of Steamed has nothing to do with whether or not Katie MacAlister "gets" steampunk. The number of writers who are doing steampunk right now, but aren't part of the steampunk community, are numerous. Steampunk darling Tim Powers responds with bemusement at his inclusion in steampunk events: he is not part of the community, yet produced one of the "classics" of steampunk, The Anubis Gates. I don't like Steamed much because I think it's poorly written: it's a clunky cross-hatch tale where a steampunk fanboy crosses over into a steampunk world. References to Abney Park in the opening chapter are so thinly veiled as to be laughable, definitely demonstrating that Katie MacAlister's understanding of steampunk was mediated through web search, not research. Yet apparently a number of people really liked it, and it proved to be their doorway into the wider world of steampunk. I've met quite a few folks who sheepishly admit Steamed was their first steampunk read. Stop being sheepish people: some people's first foray into fantasy wasn't Tolkien, but Terry Brooks. I celebrate Shannara for making Middle-Earth accessible to weaker readers.

All this to once again say, let us declare a moratorium on transcendent language in regards to steampunk. Enough with essentialist ideas about steampunk needing to be something. People often misunderstand my goal of definition as essentialism, but there is a difference between defining by observation, and defining by desire. I don't need steampunk to be anything. In truth, if you look back through this blog, or read my article, "Finding Nemo," you'll discover I've already had to revise some of my ideas. I started out thinking the punk/oppositional politics was intrinsic to steampunk literature: it's not. Some books have it, others don't. Appeals to etymology are pointless: the punk in steampunk doesn't mean anything. All the punks who keep saying "you're using our name, expect some bad-ass shenanigans to ensue," are as misguided as Christians who keep bemoaning the loss of "Christ in Christmas,"  as though secular celebrations of that season don't have a cultural reality and validity all their own.

Likewise, I could have come up with some clever way of responding to those who want their steampunk G-rated with an etymological pun on "if you don't want your literature steamy, maybe you shouldn't be reading steampunk." That would be ridiculous. Steampunk isn't inherently polite and prudish, nor is inherently sensual and steamy. Steampunk is an aesthetic: this month, I've investigated its application to romance and more often, erotica. Peter Tupper's The Innocent's Tale is good writing, erotica, steampunk, or not. It utilizes familiar science fiction tropes, but enlarges on them through strong characters and clever world-building. The BDSM aspects won't be for everyone, but as I learned at Steam Powered, they clearly appeal to someone in the steampunk community. If it isn't your brand, don't smoke it.
Email Post