The Innocent's Progress by Peter Tupper 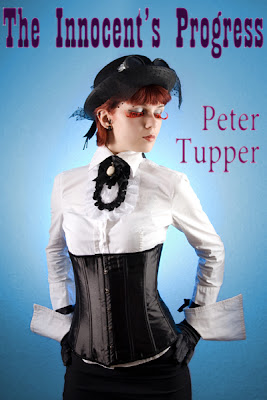 When I started reading Peter Tupper's The Innocent's Progress, my intention was to read one or two stories and move on. My goals for the month are ambitious, and I have a lot on my teaching plate besides. After reading the eponymous first tale, "The Innocent's Progress," I thought I'd just post story-by-story. By the time I'd finished the second story, "The Pretty Horsebreaker," I was immersed in Tupper's alternate world, a place both historically familiar and yet culturally strange. I've only read the first three stories, having gone further than I intended, so I'll focus on those in the following review.

I love the structure of this book, with its slow reveal of both its world and characters. "The Innocent's Progress" introduces the reader to the Razor Lotus theatre, a space of pleasure and performance. The Razor Lotus strikes me as the type of theatre we imagine took place in the Victorian era, when thespians had low reputations and were considered only marginally above sex-trade workers. Here, Tupper combines this ill-repute with creative environment: the Razor Lotus is a blending of the Théâtre des Vampires from Rice's Interview with the Vampire and the bordello little Nell works at in the final act of Neal Stephenson's The Diamond Age. The first presents reality as a fantasy, while the second presents fantasies as realities - the space of the Razor Lotus offers both. Be warned - you might dismiss the anthology as simply neo-Victorian based only on this first story. Read on, as Tupper will bring the technofantasy and retrofuturism to in the second and third tales.

The second story, "The Pretty Horsebreaker," expands the reader's view of the City and its environs. Tupper only thinly veils his historical references with slightly removed renamings: Sir Richard Burton becomes Captain Rhisiart Braen, and Oscar Wilde becomes Odgar Wycke. Yet rather than being clunky, as such historical references often are, reducing the major figures of history to caricatures or complete digressions (such as the robust, Captain America-esque Mark Twain in Image comics' Alter Nation), the remove is effective. I was aware of the way Braen resembled Burton, but wasn't distracted by the real history because the Welsh-style names made enough of a remove to keep me thinking of the characters as versions of the historical figures. Further, Tupper's world is easier to accept because it is completely other: I don't balk at a steam car, since in a world where naming conventions have replaced Earnest with Earwin, a steam car isn't an anachronism I need to suspend disbelief about. Instead, it's part of this alternate steampunk world. I was also suitably impressed that instead of the morality police being the ever-shat-upon Church (capital C, to let you know the author thinks of the complexity of multifaceted faith practice as a single, monolithic institution), Tupper renders the authority that takes Wycke/Wilde away to jail the department of Decency: "We're from Decency, sir." It's a nice touch, and one I can't help applauding. Nineteenth century Christianity didn't have the monopoly on Victorian hypocrisy concerning sex.


"The Honeycomb was vast, more than a dozen large buildings grown together, connected by tunnels, covered alleys, walkways, and bridges; encrusted with layer after layer of buttresses, iron girders, bricks, tiles, metal barred windows, ivy, moss, and mushrooms ... Inside, it was an endless warren of rooms, corridors, galleries, garrets, and more lit by a jumble of electric lights, gas lamps, mirrors, and candelabras. Rooms were subdivided into smaller cells, while walls were torn down to make larger ones. Floors were connected by staircases, ladders, dumbwaiters, lifts, pulley shafts, crawlspaces, and attics...There were no complete maps. The Honeycomb was too old, too complex, too large, and too variable to ever chart comprehensively." (65-66)

The women who live inside the Honeycomb are factory workers engaged in assembly line production of Wire terminals or difference engines, which are shipped from the Honeycomb to the outside world of the City. Tangwen has decided to leave the Honeycomb, but her lover Betrys wants to stay: this is the real conflict of "Delicate Work." What's fascinating about Tangwen and other Honeycomb girls is how Tupper uses them to play with the steampunk persona of engineer: Tangwen's description in "The Pretty Horsebreaker" could be any number of women at a steampunk convention, dressed in a corset on the outside, above a worker's apron, along with the ubiquitous goggles, which serve the purpose most goggles do: to protect the eyes while working with electricity or other potential harmful components. The corset is a fashion affectation the Tinkers have taken to: lesser writers seeking to play off of convention cosplay or steampunk fashion fail at pulling this off. Tupper's got a world where it makes sense, and it doesn't feel overly contrived.

This is largely owing to Tupper's excellent characters: he writes his people with diverse and believable voices.

Miss Ccri, the heroine of "The Pretty Horsebreaker," is already one of my favorite steampunk heroines: sexy, smart, and yet complex and vulnerable, she got me hot around the collar several times. She's exactly the sort of woman who would both terrify me and make me follow her around on a leash. Despite this, she's completely sympathetic and endearing. Tupper's characters are a joy to read, and his writing style is wonderfully inviting.

There's lots of sex, of course. It's erotica after all. But it's a servant of the story, not the other way around. Tupper isn't writing stock Harlequin plots that eschew innuendo and euphemism. That isn't to say your ears won't turn red if you're a former Baptist boy like me. When the characters engage in sex, love-making, or fucking, it's steamy reading, all puns intended (let's just get that lame chestnut out of the way, shall we?). However, unlike lesser erotica, where boy meets girl, boy eventually fucks girl, sex in The Innocent's Progress happens along the way: it isn't, to engage in one more groan-worthy pun, the climax of the story. The climax of "The Pretty Horsebreaker" involves two women, but they're both clothed, and resolving emotional, not physical tensions. Tupper's a damn smart writer, and anyone who dismisses The Innocent's Progress as just erotica might say The Dark Knight is just a comic book movie. I haven't finished it yet, but I wanted to move on to some other works before February wastes away. However, I'm confident in saying that even if the remaining stories are pure garbage, The Innocent's Progress is worth the money you'll pay for just the three tales I've highlighted here. I'll be returning to Tupper's fictional London in July for Canuck Steampunk Month II (Peter's a fellow Canadian!), and for the time being regretfully pull myself away from The Innocent's Progress to look at some other steampunk erotica and romance this month.