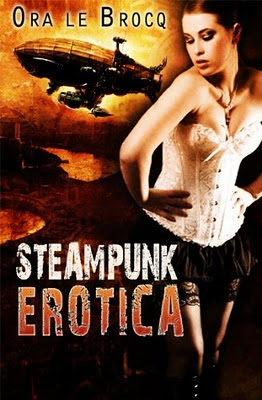 At Steamcon II this past fall, I had a woman ask me about the increase of questionable content in steampunk writing. I asked her to clarify what she meant, and understood her response to denote explicit sexual situations in books like Gordon Dahlquist's The Glass Books of the Dream Eaters. Consider yourselves warned: if you found Dahlquist too titillating, then stay far, far away from Ora Le Broq's Steampunk Erotica. My iPod nearly melted while I was reading it. I'll further warn my readers that I'm going to review this with some tongue in cheek off-colour constructions, so either forgive me, or quit reading.

For example, instead of outwitting the evil mastermind Baron Thaddeus von Vasey, Mina outsexes him. In their confrontation, the Baron uses a whip to slowly disrobe Mina, who has been running about the countryside in her private schoolgirl's outfit. As more of Mina is revealed, she has a sort of epiphany regarding herself shedding the trappings of the society she has been raised to, mediated to the reader through a strip-tease:


Mina looked down and saw that her stockings were torn in several places and her pink-white flesh showed through the gaps. She breathed deeply and felt strangely liberated. The school uniform ... had been surprisingly constrictive. ... She unconsciously undulated from side to side, glorying in the release that the insignificant man had given her ... She looked down at the remains of her torn, grubby uniform at her feet and then back at the huge range of uniforms that the baron had created for his army and she made her first decision—dress for the part.
Mina tore the boater off and flung it away. She bent over and rolled her underwear and stockings down her long, shapely legs ... This also necessitated removing her shoes, which were sensible school shoes with no shape and no grip...
Her corset was also tattered from the baron's whip. Mina tore it from her body in one sudden motion so that she was left with the two halves in her hands before she cast them aside. She stood naked, the red flames of the furnaces flickering over her bleeding body...
Throughout her unselfconscious strip, the baron had gaped lasciviously and stupidly, reluctant to stop Mina's undressing whilst being insensible to what she was achieving. As Mina gazed at him in cool, controlled contempt, he finally raised the whip again, but he had left the end trailing by Mina's foot and she trod on it sharply, preventing the baron from using the weapon. He hissed in puzzlement and anger, but behind this, Mina detected something else.
“You‟re afraid, baron,” she challenged him. “You've always been afraid.”
“I am not afraid of a girl!” squeaked the baron, but his face was agitated and sweat poured from him...
The baron stuttered in anger but was unable to speak. He tried again to raise the whip but Mina, with barely a thought, stepped forward, grabbed his hand and yanked it upright, twisting the baron's body as she did so...
The baron looked in fear at the metamorphosis in Mina's face. The frightened schoolgirl was gone, transformed into a capable and strong young woman. In the heat of the baron's workshops, in which his ambition, vanity and fear had tried to forge the beginnings of a new world order, a frightened young woman found the strength to forge herself into what the baron could never be—her own person, unencumbered by fear or egotism.

Mina then dispatches the baron with fisticuffs, before returning to her transformation via steampunk fashion:


Having stripped down to the essentials, Mina could now begin to rebuild.
The red flickering glow of the furnaces illuminated her as she strode naked along the workbenches, observing, choosing and discarding various items. A pair of hardwearing leather trousers came first, followed by long, thigh-length boots, with a split-toe design and slightly raised heels. Mina was surprised but pleased at their comfortable fit. She could only guess it was difficult for an army to march into enemy territory in uncomfortable jackboots.
A small leather jerkin with numerous straps and pockets fitted snugly over a severe shirt. It was practical for the pockets and rings that she filled with small tools and knives, as well as cartridges, a revolver and electro-thermal grenades that could destroy solid objects for up to one hundred yards ... A leather great coat went over the top. It was rather too regimented for Mina's liking, with a severe cut and standardized style, but it would be warm and it had built into it a power pack and holster for a Laserton gun ... a pair of skin-tight leather gloves on her hands almost finished her preparations, but before she moved on, Mina selected a pair of Opti-Zoom goggles and slipped them around her neck, where they dangled in place of the discarded boater. Suitably dressed, Mina walked past the unconscious form of the baron, barely glancing at him as she passed and she set out to destroy the baron's dream of world domination. (126-131)

I'm not going to suggest Ora Le Broq win any literary awards, but I have to give kudos where they are due. When teaching critical analysis, I tell students its important to evaluate a work based on the criteria and standards we normally judge that sort of work by, before moving on to more subjective readings. We do not bemoan a lack of realism in a super-hero movie, but are impressed with the level of verisimilitude Christopher Nolan's take on Batman reaches. Yet we cannot say Tim Burton's vision is worse because it does not attempt reality - it is a comic book film - we expect some level of hyperbolization. Likewise, I cannot decry erotica of this kind because the characters are sexual athletes whose bodies and reactions are exaggerations of  real-world sex. In real life, female orgasm is apparently in short shrift, if the articles devoted to achieving it in Cosmopolitan are any indication: the women in Steampunk Erotica don't just orgasm: they have multiple orgasms, often including female ejaculation. And yet, despite all this ridiculous hyperbole, Le Broq includes passages that comment on the steampunk aesthetic, and the steampunk community's perception of it. The transformation of Mina from schoolgirl to steampunk heroine through attire reads like moments in Christian fiction where people get saved: steampunk fashion isn't just cool, it will change your life. Whether one actually buys into this idea is immaterial: in the universe Le Broq has fashioned, Mina's transformation of self is visualized symbolically through steampunk fashion. This is impressive in a book involving an orgy in a factory workers' communal shower.

Whether steampunk can change the world is debatable. That Steampunk Erotica will, isn't. This isn't high-literature. It's a high-flying, orgasmic adventure. There are lots of examples of technofantasy, and many gonzo mash-ups of Victorian and modern sensibilities, which wouldn't work at all in a book with a serious tone.While I take the underlying meaning of Mina's transformation seriously, I can't take the delivery too seriously without missing the point. Steampunk Erotica, is more akin to the 1960s Adam-West Batman, than to Burton or Nolan. It's got a salacious Sock! Pow! (or perhaps a Suck! Pow!) sensibility, a wanton, carefree attitude that endears the reader, even if the sex scenes don't. While the type of over-the-top sex isn't my brand of erotica, it certainly matches the ultra-romantic steampunk world Mina Trelawney inhabits. Le Broq's Steampunk Erotica is an X-rated B-movie, whose D-cup heroine should be A-OK for those who've tired of G-rated YA content. YMMV.