Walt and Emily by Paul DiFilippo 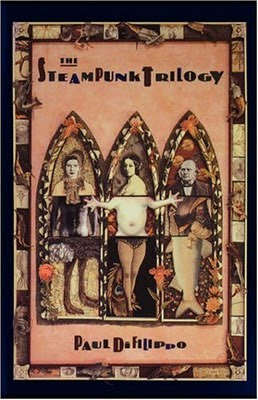 Here we are, the month almost completely gone, and I've only dealt with one bonafide romance, and two works of erotica. Given how much I've been publishing on the blog in the past two months, this is more than I'd really expected to achieve this month. Sadly, those still seeking a standard romance review this month are going to remain disappointed, as "Walt and Emily," the third novella in Paul DiFilippo's classic Steampunk Trilogy is anything but conventional. As I read it, I kept thinking, "In the unlikely event this story got made into a movie, Terry Gilliam would be one of the few directors who could pull it off." This is the story of two American poets who never met, and likely would have hated each other had they met, and their love affair amidst a fantastic steampunk journey.

For those who see the subversion of texts and canon as a form of punk-style writing, DiFilippo's steam has punk in spades: to pair up Whitman and Dickinson is some form of poetry heresy, I'm pretty sure, if one considered nothing other than their poetry on the quintessential steam technology, the locomotive. According to Ferris Cronkite, Whitman's "To A Locomotive in Winter" is a the response of a "worshipper" of the train (171), whereas Patrick F. O'Connell sees Dickinson's "I like to see it lap the miles" as a critique "about the theme of progress, as exemplified by the train" which is "devastating in its irony" (470). Whitman is characterized by Cronkite as the technophile, and Dickinson by O'Connell as the technophobe. This distinction encapsulates the polarity these poets represent, though one could find a number of other topics to establish the distance between them. 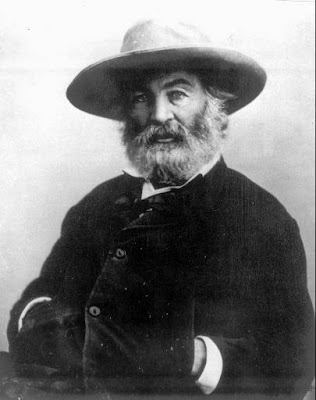 A reader without background on these giants of American verse will still grasp the strangeness of Whitman and Dickinson as couple, but they'll miss the immediate humor of moments like the opening scene: Dickinson wakes to find Whitman, "a huge hairy bearded barbarian, utterly and shamelessly naked save for a black floppy wide-brimmed hat" bathing in the fountain in front of her home (240). She is scandalized until she learns Whitman's identity, her shock turning to hope of a peer, perhaps a soul-mate, to share her poetry with. DiFillipo's use of both poet's writings is brilliant - they are interposed throughout "Walt and Emily" as actual poetry, inner ruminations, and sometimes spoken musings or responses. Again, the story is intelligible without a thorough knowledge of Whitman and Dickinson's poetry, but aficionados of these poets will have moments akin to the Marvel fanboy watching X-Men movies and catching a glimpse of Colossus or Kitty Pryde.

However, don't let these diversions into the esoterica of poetry and literary history dissuade you from reading "Walt and Emily," or anything else in The Steampunk Trilogy: as I say, the reading is intertextually enriched by knowing the sources DiFilippo is drawing from, such as H.P. Lovecraft, but the experience is rich enough without that knowledge. I would argue instead, that such richness lends itself to a deeper reading experience. During a second reading, try googling any line you suspect is poetry, and then follow up on any poem you find, looking into explications of those poems. In this way, "Walt and Emily" serves as a door to the wonderful world of poetry. 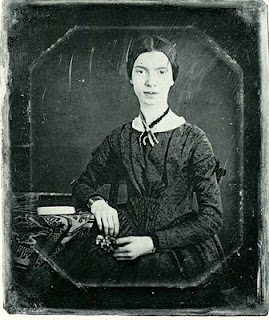 On first reading though, just enjoy the story: DiFilippo has rendered the reclusive Dickinson and the robust Whitman accurately enough (right down to Whitman's speculated bi-sexuality) for the neophyte of Nineteenth-Century American poetry, despite the story's steampunk bombast . The characters and their poetry are the only toe-hold to reality in "Walt and Emily," as in a possible concession to the morbid themes of Dickinson's poetry, the romance is given the backdrop of an extraordinary voyage into "Death's Cold Kingdom" (252). Here, as throughout The Steampunk Trilogy, DiFilippo cleverly steampunks history, conceding the prominence of Spiritualism with the necessary presence of several clairvoyants including Andrew Jackson Davis, and the fictional Madame Selavny: it is through the "science" of Spiritualism, an array of test-tubes and copper wire, and a twin-masted schooner that the voyage to the Summerland is achieved. Yet the actual journey and the means by which it is achieved are window dressing: they are ultimately less important than what Emily Dickinson learns of life and love along the way. "Walt and Emily" is an intelligent ode to the idea of whether 'tis better to have loved and lost, than never loved at all, told with wit, whimsy, and a reverent irreverence for both Whitman and Dickinson, and the poetry they left behind.