The Strange Affair of Spring Heeled Jack by Mark Hodder (2010) 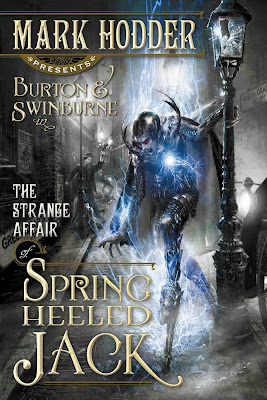 Mark Hodder's first novel is exactly what I thought I'd be reading when I started this research project in 2008: a story set in the nineteenth century about an agent of the crown in a world filled with adventure. It is what I wanted from Jonathan Green's Pax Britannia: Unnatural History and George Mann's The Affinity Bridge, both delivering the goods, but in that unsatisfying manner akin to finding out toy Spiderman web-shooters won't really let you swing off your garage. If The Strange Affair of Spring Heeled Jack was the only book I had to do my research from, I'd never have changed my idea about steampunk from a a sub-genre mixing alternate histories and anachronistic technologies to an aesthetic blending neo-Victorianism, retrofuturism, and technofantasy. In short, Hodder is writing the steampunk I expected to be reading two years ago, but never really have.

Don't get me wrong. I'm not about to change my research based on one book. I'm simply saying Hodder's changing the game again, returning readers to the sort of steampunk we were expecting to build up to from the world The Difference Engine introduced us to. While reading Spring Heeled Jack, I couldn't help but think back to The Difference Engine. Hodder writes like someone inspired by The Difference Engine, but determined to have a hell of a lot more fun than Gibson and Sterling. This is a similar London, filled with the poor and destitute, where "coal dust coalescing with particles of ice in the upper layers of fog [drift] to the ground like black snowflakes" (67). And yet, for all its grit, Spring Heeled Jack doesn't sacrifice the romantic call of adventure. Hodder's hero, Sir Richard Francis Burton, is everything Green and Mann were trying for with Ulysses Quicksilver and Sir Maurice Newbury, but never quite achieved. Burton's narrative voice is more convincing. He isn't indestructible, irresistible, or indefatigable. He's regularly on the edge of an attack of malaria; has doubts about the work he's engaging in,wondering if he should just get married and settle down, and gets hurt bad enough to rival Bruce Willis in the first Die Hard movie. His sidekick, the poet Algernon Charles Swinburne, is the perfect foil to Burton's taciturn hero. I defy readers to dislike him the duration of the book. He regularly screeches "Auguste Dupin!" Poe's fictional detective, in glee over Burton's appointment as an agent of the crown, and when he discovers a way to get involved in the intrigues, goes into histrionics, much to Burton's amused chagrin:


"Calm down, you silly ass!" The king's agent chuckled.
Swinburne, though he became uncharacteristically silent, did not calm down. As they walked along, his gait became increasingly eccentric, until he was practically skipping, and he wrung his hands together excitedly, twitching and jerking as if on the edge of a fit.
By the time they'd waved down a hansom and were chugging homeward, the poet could contain himself no longer, and exploded: "It's obvious, Richard! It's obvious!"
"What is?"
"That I have to masquerade as a chimney sweep!" (183)

This scene epitomizes the two men's odd couple, cop-buddy-action-movie relationship. Burton is large and brooding, while Swinburne is slight and expressive: humour ensues. Hodder has created colourful characters I care about, in a world dangerous enough that the cliff-hanger ending of a chapter ending in abduction gave me flashbacks to reading adventure novels as a boy, before I was clever or jaded or academic enough to stay one step ahead of the author. This is a book I couldn't put down, a book that kept me up late into the wee hours, written so well I refused to skip ahead for fear of missing a great line or a well-crafted description.

In addition to sheer enjoyment, Spring Heeled Jack offers serious studies of steampunk literature an intersection with Karen Hellekson's The Alternate History: Refiguring Historical Time, along with a plethora of scholarly works on possible worlds theory, since Hodder's steampunk world exists by accident. This is genuine anachronism, and as in Lansdale's Ned the Seal series, the characters are aware of it. Burton discovers that time has been tampered with; there is something wrong with the stream of history he is living in: "The way ahead offers choices that should never be offered and challenges that should never be faced. It is false, this path, yet you walk it and it is best that you do so" (149). There are few, if any, steampunk texts that are this self-reflexive without being cumbersome. Hodder combines entertainment with good time-travel conundrums, and like the Star Trek reboot, gives his steampunk world a reason for existing.

Hodder recently decried the lack of punk in steampunk. I'm no fan of that particularly argument, unless this is what punk in steampunk looks like, in which case I say with Oliver, "Please, sir, I want some more."
Email Post
Labels: Novels