I remember the first time I got an email from Lee Ann Farruga, informing me of her website, Steampunk Canada. At the time, I was dismissive: most people who inform me they have a new website or blog dedicated to steampunk don't last very long. There are exceptions, and Lee Ann proved to be one of them, and then some. I've gone from dismissive to dedicated. I'm a big fan of this classy lady from Central Canada, and was lucky enough to spend some time with her at the Canadian National Steampunk Exhibition earlier this year. In a moment of weakness, I stated on Twitter that I wouldn't be writing for the month of August, and welcomed guest posts. Lee Ann stepped up right away, and this post is the result. While I'll still be taking a bit of August off, I'll be doing Canuck Steampunk all summer, and wanted to kick off with Lee Ann's post for two reasons. First, because she is one of the most notable Canadian faces of steampunk, if not the most notable. Second, because it's Canada Day, and Lee Ann just let me have the day off. Happy Canada Day, everyone! 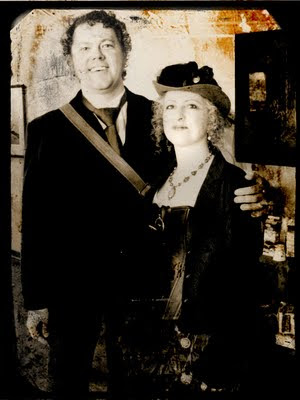 Steampunks in Canada are a special group of people. Canadians in general stand out from the rest of the world with our friendly disposition, unique sense of style, and pride in being Canadian. We are a country of adventurers. All families, except those who originate in Canada (our native peoples) had an adventurous soul in the family who decided to come to the wilds of Canada to start a new life. We are a country of free thinkers. Our freedom of expression is greatest here than anywhere else in the world. We are a country of people who like to have fun and who do not take ourselves too seriously (it makes wrinkles, eh). We like things that are old and new and unique. Canadians make fabulous steampunks!
The first local steampunk group was started in 2008 in Toronto, Ontario. A few months later a local group started in Ottawa, Ontario in 2009. That same year, local groups were started in Vancouver and Victoria, B.C.; Edmonton and Calgary, Alberta; and Montreal, Quebec. Since I started Steampunk Canada in 2010 more local groups have sprung up in Niagara, Ontario; Regina, Saskatchewan; St. John’s, Newfoundland; and Halifax, Nova Scotia.  Second and third groups have started in Vancouver, Calgary, Edmonton and Montreal.  Very recently a group was started for the whole Province of Quebec as well.
Although it would seem that we are growing quite quickly, if you look at the United States or Britain, you can see that Canada is still merely a steampunk cogling.  In the United States there are many groups in each state.  In Britain, there are many smaller groups who gather regularly together as one large mass of steampunks for events such as the Asylum.  Still, being so young, what Canadian steampunks have is a fresh spirit.  People are starting and joining groups with new ideas and the excitement of finding their place.
Local groups are as varied as our country. An interesting phenomenon that has happened across Canada is that the median age of each group varies and it generally dictates the style of events, art, outfits and even cost concerns.  Another factor that makes our groups different is that across Canada each area has a very different history with very different museums, homes, parks and so on.  This leads to a great variety in events.  Victoria – castles and teas, Vancouver – art and music, Edmonton and Calgary – pub nights, weird west and dinosaurs,  Niagara – meetings and movie nights, Toronto – club nights and photo shoots, Ottawa – picnics and workshops, Halifax – art and jewelery fairs (I would love to attend a beach event here) and Montreal, Regina and St. John’s are just beginning to set up events .   This, of course, is not to say that each local group only holds these types of events, but if one looks at the list of events over a long period of time a pattern emerges.  As well, once again, age groups come into play.  Different age groups steer toward more favourite activities and so these are chosen more often.  As local groups grow and embrace more age groups their variety of events will surely grow with them.
For a detailed view I can only look at my own local group in Ottawa. We have quite a wide range of member ages and this has lead to a wide variety of events.  For the last three years we have held an event (and sometimes more) each month.  The first was a tea.  I still suggest this, or a pub night, to groups just starting out as a great way to meet people interested in joining or just looking to learn more about steampunk.  Everyone has a chance to greet each other and chat over the course of the evening. Since our first tea we have had movie nights, museum tours, picnics, concerts, workshops, poker and whist nights,  a swap meet and barbeque, pub nights and a murder mystery and have attended as a group at a book signing, winter balls,  a storytelling evening, a Chautauqua, a movie premiere, an art exhibit opening, a carnival and much more.  We had a very large event of over 100 people for our first anniversary and a smaller pub outing (40 people) for our second.
Local groups are a wonderful way to meet new friends and find amazing local artists and artistic folk right in your own backyard.  Amazing talents that you many never have known of before. Of course Steampunk Canada will continue to help steampunks find each other, promote local groups and their events, and get the word out about Canadian artists, authors, musicians and other artistic folk looking to tell everyone about their newest steampunk creation.
As the number of local and provincial groups grow and spread across Canada, my hope is that many will work together – this is just starting in Vancouver between Black Steam and Vancouverites for Steampunk.  They are organizing and informing each other of events in their area.  As well, Calgary’s two local groups have in the past had combined events.  We are also beginning to see larger events bring local groups and solitary steampunks together.  The first was the Victoria Steam expo.  This past spring saw the Canadian National Steampunk Exhibition in Ontario.  Soon there will be a second Victoria Steam Expo.  It would be wonderful to next have a larger event held in the Prairies and in the East.  Weekend events provide a great opportunity to those in outlying areas to attend since the travel time involved makes more sense when staying for a longer period of time. It also gives the attendees more time to greet and get to know each other....like a longer and grander tea. 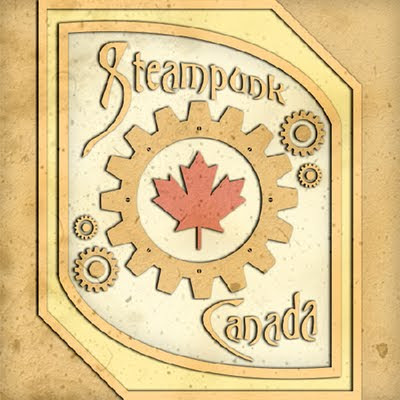