At the end of this year's Airship Awards banquet at Steamcon III in Seattle, Diana Vick announced the theme for 2012's Steamcon IV: Victorian Monsters. Shortly after the announcement, I told Diana it was "dirty pool" to go having yet another fun theme for the fourth year in a row. That famous quote from the Godfather III is rolling around in my head, given I thought this was likely my last Steamcon: "Just when I thought I was out . . . they pull me back in."


I don't know who Diana's planning to invite as Guests of Honor, but the website has further clarified the theme as "All the Classic Monsters born during the Victorian period." Arguably, we're looking at Frankenstein's monster, Dracula, Mr. Hyde, the Invisible Man, the Martians from War of the Worlds, Dr. Moreau's hybrids, Varney the Vampire, Carmilla, and Dorian Gray. If I'm in attendance, I'll be bringing along a Wendigo from the Great White North, courtesy of Algernon Blackwood. Given steampunks' love for H.P. Lovecraft, I'll be shocked if we don't see the whole damn Whateley family in attendance, or at the very least, a copy of the Necronomicon.

Still, that's a whole year away, and in the meantime, Halloween is just around the corner, and I've been pondering the intersection of steampunk and horror for a week and a half now. To that end, here's a list, in no way meant to seem comprehensive, of books combining steampunk with monsters: 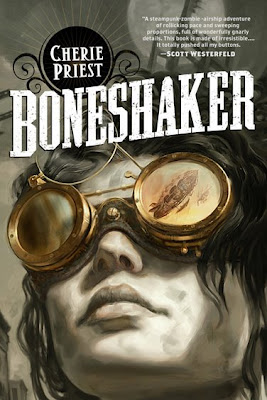 Zombies
Obviously, Cherie Priest's Clockwork Century books immediately jump to mind, with the Dust-driven revenants of Boneshaker, Clementine, Dreadnought, and Ganymede. While they sometimes serve more as part of the setting than overt plot device, Priest's zombies are an interesting twist on the zombie as victim of addiction. Steampunk naysayers nonplussed by the anachronistic inclusion of these mutant offspring of the atom should remember that Priest was not the first to include zombies in steampunk fiction: that distinction goes to James Blaylock, who brought us zombies of a kind in the steampunk classic Homunculus back in the '80s. Gunslinger Johnny Ringo returns from the dead to shamble into Tombstone in Mike Resnick's Buntline Special, while other steampunk works that include the walking dead, or close cousins thereof are Tim Akers' Dead of Veridon and George Mann's The Affinity Bridge. 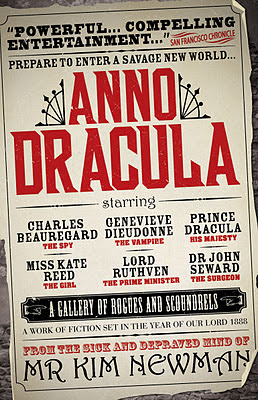 Vampires
Dracula, the king of all vampires, makes but a cameo in Kim Newman's Anno Dracula; yet the absence of the big-D is compensated by the sheer volume of nineteenth century vampires parading through the pages of this classic work of horror and alternate history. Titan books reissued Anno Dracula earlier this year, and it's the Halloween treat that will do the trick if you're a fang-fan.

While nowhere near as serious as Anno Dracula, Gail Carriger's paranormal romance series, The Parasol Protectorate, is the antidote to the viral spread of sparkling vampires for that teen who's tiring of Edward Cullen. Carriger's vampires don't lurk in the shadows: they cavort through London in bright coloured waistcoats, setting fashion trends. Her werewolves are an interesting study of machismo and alpha male stereotypes, and her protagonist is a preternatural, a woman without a soul who cancels out the supernatural. Don't let the laughs fool you, though: Carriger can write creepy when the occasion calls for it, from the waxen faced golem VIXI in Soulless to the poltergeists in Heartless.

While it's not steampunk, fans of steampunk writer Tim Powers will do well to check out his The Stress of Her Regard, which combines a vampire of sorts with the story of how Frankenstein came to be written. Other steampunk novels with bloodsucking include Elizabeth Bear's New Amsterdam; while I haven't read these yet,  I'm excited to get around to Clay and Susan Griffith's Vampire Empire Series, The Greyfriar and The Riftwalker; finally,  Dracula makes another brief appearance in Joe Lansdale's Zeppelins West. 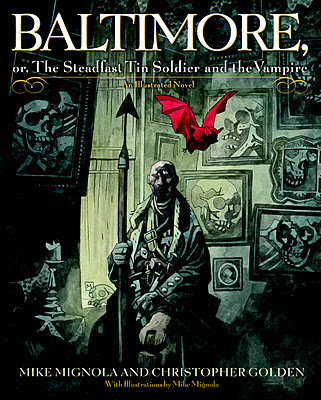 More Monsters!
China Mieville's Perdido Street Station provides us with monsters galore, and monster hunters in pursuit, in what is effectively a steampunk Aliens/Blade 2/Mimic tale: a bug hunt in a fantastic steampunk setting. Jonathan Green's Leviathan Rising fulfills our fear of giant monsters in the water abysses, and Canadian Arthur Slade takes Quasimodo's monstrous visage and renders it heroic in The Hunchback Assignments.

And finally, while I'd hesitate to call Mike Mignola's Baltimore: The Steadfast Tin Solider and the Vampire steampunk, it has the right look and feel for the steampunk crowd. It's a hybrid homage to classic monsters: a pastiche of Victor Frankenstein's obsessive pursuit of his creation, of the vampire hunters who stalk Dracula, and Lovecraft's Shadow over Innsmouth, with poetic prose references to Andersen's fairy tale of the Steadfast Tin Soldier. I haven't had an opportunity to read Mignola's comic series of Baltimore, but the original book was a joy to read. And if a certain con promoter is listening, I think Mignola's the man to have as artist GOH next year at Steamcon IV. Since his tale isn't particularly steampunk, it might fit the bill for "monsters birthed in the Victorian period."