The Hunter by Theresa Myers 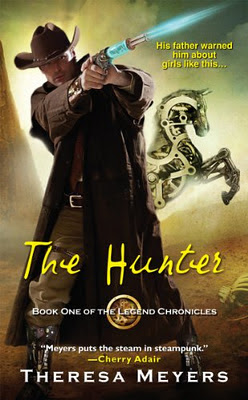 When I saw the cover of Theresa Myers' The Hunter, I thought, "I should get my mom to do the review on this one." She's a huge fan of westerns, and with a tag line like "his father warned him about girls like this," I figured this would be a standard western with steampunk flavors. Besides, the idea of having the steampunk scholar's mom weighing in on a steampunk western seemed fun.

You'll note that she's not the one writing this review, and the story of why begins with the cover for the Hunter , itself an interesting case of reader expectations and marketing strategies, especially for steampunk fans. Rather than the "gears 'n grit" so much steampunk is currently packaged with, The Hunter's cover is very shiny, in a Boris-Vallejo-paints-SF-way. It appears to be banking on the hope that Cowboys and Aliens would do well at the box office. Compare the cover for Devon Monk's Dead Iron to see what I mean. My guess is that some steampunk connoisseurs will turn their nose up at the Hunter, with its neon-glow pistol and gleaming clockwork horse, and maybe that's for the best. The Hunter isn't steampunk written for those who consider The Difference Engine and its direct offspring as quintessential steampunk. Rather, The Hunter is entry-level access to the steampunk aesthetic for neophytes like my mom. 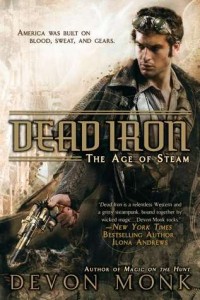 The self-appointed door wardens of steampunk were disappointed when Katie MacAlister's Steamed stormed the steampunk market outside the subculture. I expect Myers is in for some of the same disdain. The Hunter is certainly working with the steampunkaesthetic, whatever criticism supercilious exclusivists may level at it. It takes place in the nineteenth century (neo-Victorian), albeit in America, but any publishers still under the impression steampunk only happens in London need to wake up and smell the phlogiston, because steampunk has been set outside London since Rudy Rucker wrote The Hollow Earth in 1990. Further, even Myers' demon lord Rathe, despite decidedly mythic roots, "part vampire, part fallen archangel," dresses in neo-Vic fashion: "he was dressed like a dapper Englishman, with a great black overcape, freshly pressed black pin-striped suit with matching vest, crisp white high-collar shirt, and blood-red silk tie" (21); the heroine's attitude and desire for freedom displays anachronistic attitudes for a woman in the Old West, even if she is a demon (retrofuturism), and impossible technologies (technofantasy) like Tempus the clockwork horse, vampires' dirigibles that exemplify Arthur Evans' category of Vernian "vehicular utopias," and the ubiquitous goggles, rendered here as "spectro-photometric oglifiers" (16). It isn't literary or high minded: it's mostly good bodice-ripping fun, and while some critics are interested in creating taxonomies for steampunk based in ideologies, I will once again beat the proverbial dead horse here at Steampunk Scholar: steampunk is an aesthetic, an empty tea cup ornately decorate waiting to be filled. In the case of Theresa Myers' The Hunter, it's filled with the smell of leather saddles and gunpowder, mixed with sweat and other bodily fluids generated by the hero rubbing up against a busty red headed succubus a lot.

And that's why you're not reading my mother's review of The Hunter.

While taking a bright 'n shiny brass veneer approach to the cover will only mislead those who prefer their steampunk gritty, The Hunter's cover misleads those seeking out steampunk that's a little dirty, and by dirty I mean steamy. The Hunter, in addition to being steampunk, is paranormal romance. About a succubus. Perhaps appealing to Cowboys and Aliens fans didn't involve a red-headed devil-lady bursting out of her corset on the cover (much to my disappointment). However, given the level of steam Myers generates in The Hunter, an image of a red-headed devil-lady on the cover might have given me fair warning. Despite my mom's familiarity with Western types, she would be unlikely to recognize the Hooker with the Heart of Gold in Lily the Succubus. Further, I didn't want to have to explain what a succubus is to my mom. That's a conversation for a father and son.

Which brings me back to that tag line: his father had warned him about girls like this. It's clever, because Colt, the male protagonist, really was warned by his father about women like Lily the succubus, a female Darkin. As a hunter, Colt was trained by his father to kill Lily's kind, but in great paranormal romantic tradition, he can't: first, because he needs her to help him find the Book, and second because he wants her. Herein lies the problem for our hero and heroine: "Colt was a Hunter. She was a demon. The two would never mix, so why did she suddenly yearn for it to happen?" (47). He's no choir boy, but she's the Bad Girl turned all the way up to eleven.

This must be a trope of paranormal romance, though I'm no expert: our hero and heroine have a powerful desire for each other, but cannot act on it for fear of starting the apocalypse, or turning one of them into a mindless monster, or something equally bad in a life writ large kind of way, to use Joss Whedon's terms. So while the plot is recycled adventure-quest-for-the-lost-relic, it's ancillary to the real crisis, which is how Lily and Colt can get to the passionate embrace without Lily consuming Colt's soul in the process. As Robert Irwin stated in The Arabian Nights: A Companion, "the romantic and erotic fiction of any culture is always constructed from conventional plot motifs, literary stereotypes and stock themes (Lovers often swooned in medieval diction, but did they do so in medieval reality?)" (161). Those seeking unconventional plot, literary innovation, and challenging themes would do well to look elsewhere. However, those seeking to enjoy a fun romp in the saddle and the sack involving some steampunk adventure along the way to a number of climaxes, both narrative and naughty, would do well to check out Theresa Myers' The Hunter.

Which is once again, why I'm the one writing about this book, and not my mom. I'm not up for a conversation involving "bodies in unison in a run to the finish" (290) with my mother. That's a conversation for me and my wife.