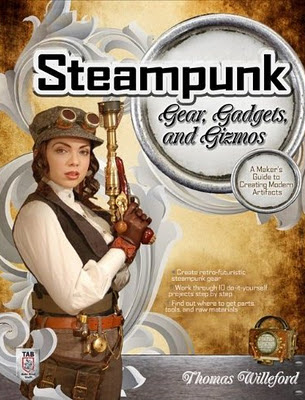 For those who celebrate Christmas, it's Advent, and if you're like many, you're counting the shopping days remaining, or like me, are lighting advent wreaths and opening cardboard doors to find chocolate treats. As ecumenical as I am, I celebrate Christmas, so the blog gets a festive makeover, and with teeth gritted, I emerge from end-of-term grading binges to write a few holiday-themed posts.

We begin our Christmas series for 2011 with Thomas Willeford's Steampunk: Gear, Gadgets, and Gizmos, "A Maker's Guide to Creating Modern Artifacts." As anyone familiar with the blog knows, I am not a Maker, nor do I comment much on what Makers are up to. They are an aspect of steampunk for another scholar's academic scrutiny. I must admit, I cringe whenever someone says that steampunk is about making things with your hands, since I live the life of the mind; all my steampunk contributions have been virtual, with my hands involved only in typing on a decidedly non-steampunk keyboard.

That said, I harbor a secret hope for the time and wherewithal to someday mod a Nerf Maverick: I've owned one since before my research interests took me to conventions where I saw scores of the toy guns, day-glo colours buried beneath a patina of paint, and I'd love to try my hand at it, cliched as that may be. Likewise, in looking through Gear, Gadgets, and Gizmos (GGG), I'm optimistic I could, with Thomas Willeford's help, make my own goggles.

I have friends who would benefit more from owning Gear, Gadgets, and Gizmos, and it was thinking of them that I imagined an alternate history of my life where I had more money and time. In that alternate history, I buy these friends, these amateur tinkerers, people who are much better with their hands than I am (insofar as making things go - I am very good with my hands at a number of other things), a copy of Willeford's GGG. With the list of "Must Have Tools" found on page 8 in hand, I go shopping. I then  shove the coping saw, metal files, rotary hole punch, and fine-point magic markers, along with the rest of the "Tools of the Mad Scientist" into a very large and very durable stocking, and place it under their tree after having broken into their house by drilling out their front door lock with the Electric Power Drill Willeford recommends, in addition to an Electric Rotary Power Tool and Reciprocating Handsaw under "Handheld Power Tools."

Getting the picture? Imagine, instead of buying your favorite burgeoning steampunk Maker a pair of goggles for Christmas, buying them the tools and materials to make their own. Odds are, if they're handy people in a Tim Allen vein, they'll already own half these tools. If they are very handy, they've been eagerly waiting for an excuse to use these tools. Willeford's GGG offers a whimsical solution to the tools collecting dust in your handy friend's workroom.

If that seems too costly, then consider buying the book along with a dead cuckoo clock and allowing that neophyte Tinkerer to enjoy the process of "Gear Mining--Or How to Dissect a Cuckoo," outlined in Chapter 4. Or buy them the materials need to build one project.

Alternately, if your Steampunk-Maker-in-the-Making is someone you have your romantic eye on, buy them the book, and make a coupon book for date-nights to the Antique Shop or Flea Market. Willeford devotes space to collecting all the necessary paraphenalia for the Tesla wannabe.

I recall a nonplussed artist at Nova Albion in 2010, bemoaning the copycat nature of steampunk art. I'm more in Kirk Hammett's camp (yes, the guitarist from Metallica), who once said that "imitation is creation." I'm sure he wasn't the first to say so, but he's the one I remember. I remember because I learned to play bass with Metallica tabs. I learned to draw by tracing my comic books. And I think I can learn to make goggles with Thomas Willeford's help: that, and my friends' tools.

Head over to Amazon.com to look through sample pages, which include those crucial tool lists!

P.S. Don't take this recommendation from a non-Maker alone! Nathan Hays (@thegeo) of Fortune's Ember, said the following about GGG on Twitter: "I can't recommend this Steampunk craft book enough! http://amzn.to/vxKG8s Has REAL projects, rayguns/arms/etc . . . It isn't another shitty "Lets take a chain from Hobby Lobby and glue a gear to an octopus pendant and hang it on it. Steampunk!" . . . It is a book of actually cool, useful, unique, and CREATIVE ideas . . . My copy arrived today, once it warms up in a few months I have quite a few things to try out now."
Email Post
Labels: Makers Technofantasy