All Men of Genius by Lev AC Rosen 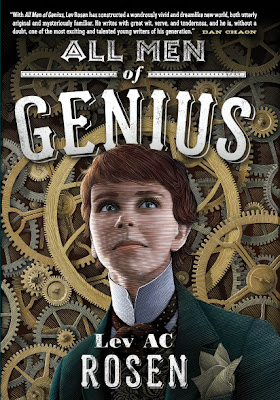 I love a colourful title, but I've done my best to keep the blog post titles very simple and direct when looking at individual works. If I were writing this article for Tor or another blog, I'd have called it "All Men of Genius: Steampunk Epiphanies on Twelfth Night."

Last night was Twelfth Night, and today is Epiphany, and thus the end of the Christmas season for those who follow liturgical calendars, or who are simply too remiss or  lazy to take down the tree before the first weekend of January. I like to drag my Christmas out as long as I can, and this post will be the final Christmas post of the 2011/12 season. Given All Men of Genius' use of Shakespeare's Twelfth Night and a wonderful scene at Christmas riffing off Oscar Wilde's The Importance of Being Earnest, I thought it seasonally appropriate.

I must begin by confessing that I was conflicted about reading All Men of Genius. I wanted to read it because Lev AC Rosen had informed me it dealt with Twelfth Night after I posted on the steampunked Shakespeare here in Edmonton last summer. But I couldn't pick it up because I loathed the cover. It's not the design: I like that very much. If your book is supposed to be steampunk, then by all means let me know with a deluge of cogs. But the flawless-heroine-as-boy on the cover reminded me too much of a marionette, and they terrify me. So I didn't pick it up for some time for that terribly petty reason. (I've also read reviews where the cover was the reason picked it up, so clearly this an entirely subjective comment, but one I had to voice).

I recently heard a lecture where Michael Drout stated that plot summaries should be avoided when we're writing about literature, which I found refreshing, as I rarely give them: I'd prefer to talk about the book's themes or ideas, or how it relates to the steampunk aesthetic. If you are intrigued, then I have done my work. If you want a plot summary, it is available at Amazon.

Accordingly, I am less concerned with making the nigh unavoidable comparison others have to Harry Potter: write a story about young people at a school of the fantastic, even if you replace magic with machines, and you'll find yourself being conflated with Rowling. This is a plot device, and Hogwarts was neither the first, nor will it prove the last of such schools. Instead, I'm interested in how the fantastic is handled at Illyria College, where one can attach bat wings to a ferret without any appeal to biology (54). In Rosen's steampunk school, the creation of a three tailed snake (133) is a side-note, while the heroine's work at creating a perpetual motion machine takes some time and thought. This is not because Rosen is valuing, to use Westerfeld's designations, Clanker over Darwinist technology, but because it works for the story. Rosen's heroine works with machines: had his heroine been the creator of three-tailed snakes and bat-winged ferrets, I imagine the problem of creating them would have required greater rigor. This is once again steampunk technofantasy, and thankfully, it is largely backdrop to Rosen's tale of gender-bending romance.

I say thankfully because when steampunk writers spend too much time explaining their technology, when it ceases to be part of the setting and becomes instead the reason for the writing, the story often suffers. Rosen's story is always his foremost concern. There's certainly enough steampunk technofantasy here to satisfy those who need the technology to play a large role, but it serves to advance the plot, not draw attention to itself. At any rate, what's clear is that Rosen is using one of the elements of the steampunk aesthetic: technofantasy.

Further, Rosen uses social retrofuturism by positing yet another steampunk "New Woman" in the way we've already seen writers like Carriger and Priest do. Heroine Violet Adams' solution to be admitted to male-only Illyria College is to dress as a man: yet her long-term goal is to "show the world--or at least the scientific world--that women were men's equals in every sense" (160). Rosen engages in other expressions of social and technological retrofuturism, but they are secondary to Violet's quest for recognition as an inventor. This is one of the book's greatest strengths, that Rosen successfully pairs his use of technofantasy with his use of social retrofuturism:


"In her mind, she was building a marvelous machine. Not just a machine, but a dress. A dress for men and women alike, with marvelous long arms that stretched our farther than Violet was tall. A dress that would give anyone who wore it the same strength, strength enough to build carriages, regardless of gender or age . . . But most important, it would look like a woman. Her machine would be more beautiful than the loveliest mechanical dancing girl, but its purpose would be more beautiful, too. It would make women into a symbol of strength." (159-60)

Finally, the book is obviously Neo-Victorian, without any need to caveat that category by delimiting either temporal or geographic concerns. That is to say, while I mean it to include any evocation of the Industrial Era in a global sense, Rosen's story takes place in nineteenth century London, and while Rosen attends to many historical aspects, such as the inclusion of a Christmas break, we would have the sense this is not the London spoken of in Mayhew's London Labour and the London Poor, even without the elements of technofantasy or retrofuturism. It evokes the period, but does not slavishly recreate it.

"So," some might say, "Lev AC Rosen's All Men of Genius is clearly a steampunk book!" And they'd be right, but not in the sense of hitting or missing a target. Instead, I would say that Rosen utilizes all aspects of the steampunk aesthetic, artfully weaving them into the fabric of his story. In a recent review in Science Fiction Studies, Jess Nevins speculated that instead of working with a binary, is/not is approach to steampunk, steampunk texts will be considered as "more" or "less" steampunk on Cherie Priest's idea of the aesthetic as a spectrum (517). It's an idea I've been considering as well, not of positing works as steampunk or not, but analyzing instead how much of the aesthetic they use, and to what degree.

I'll deal with this more in the coming year, but for the time being, I wanted to introduce a Venn diagram as food for thought. I'm not convinced it's the best way to chart this, but as this blog has always been about the discussion, I'm hoping it will generate some. 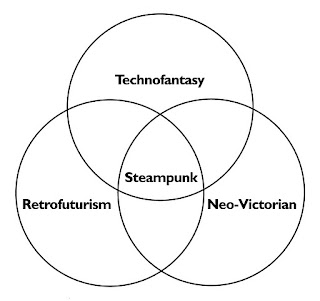