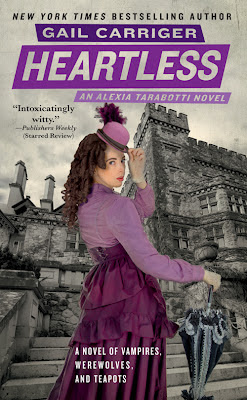 When Soulless was first released, detractors stated it wasn't "steampunk enough." Justification was often on the technical end: the book was set in Victorian London, but where was the anachronistic technology, the retro futuristic mechanical innovations?  This simplistic approach to determining what was or wasn't Steampunk bothered me, since it seemed an exceedingly narrow understanding of technology. At my first panel at a Steampunk convention, Victorian technology with Christopher Garcia and J. Daniel Sawyer, we discussed medicine and chemistry at length. At the time, both were rare in Steampunk narratives outside a nod to Moreau or Jekyll and Hyde. Spiritualism was also a 'science' in the Victorian era. In the dabblings of the Hypocras Club's theories of the soul, Carriger had effectively dealt with these less-taken roads of steampunked technology.

Nevertheless, there were those in the Steampunk community who continued to act as naysayers to The Parasol Protectorate series. I suspect a number of factors contributed to these dismissals: the series was  marketed as a romance, and "real steampunk" couldn't be romance (this by the 'serious' Steampunk aficionados, who didn't want any silly girls in their tree fort), there wasn't enough science (as though there was science in any Steampunk at the time), and it had vampires and werewolves (this was a variation of the "not enough science" argument which only underscores how ignorant the scene was of its own aesthetic -  despite usually being used as a catch all substance for making impossible technologies work, aether was somehow scientific,--but werewolves and vampires weren't, despite Carriger's pesudo-scientific treatment of them within her fantastic ontology). In short, I found the arguments unconvincing, especially as I got further into my own research.

Initially, I must admit I was swayed by what others were saying about what steampunk is/was/will-be: if so-and-so said it, it must be true, because they're an important author/editor/artist/designer/maker/pretentious-ass. But by the time Changeless was released, I had a much firmer grasp of what I thought about the steampunk aesthetic, and could say with firm conviction, since I was constantly being asked if this or that book was steampunk, that the Parasol Protectorate books were, quite clearly, steampunk (or as I would put it, clearly using the steampunk aesthetic).

I know there are still those who erroneously think Steampunk must contain steam technology, despite scant few steampunk books before Cherie Priest's Clockwork Century using real fuel sources. There are also those who still debate the old chestnut of punk in Steampunk, which is equally vain, since there's nothing inherently "punk" in Jeter, Blaylock, Powers, or more recently, Westerfeld or Priest. This argument actually admits there isn't enough punk in Steampunk, and then proceed to impose a definition that includes punk ideals in it.

The point of all these digressions being, there were those who sought to exclude Lady Maccon's adventures from the Holy Steampunk Canon.

When I finished Heartless, the fourth book in the series, I tweeted something to this effect: "naysayers who dismissed @gailcarriger's novels as not Steampunk enough should brush up on their crow recipes," because the mayhem Alexia finds herself surrounded by in Heartless contains everything the narrow-mind Steampunk demands. I can't help but wonder if the steam-powered automaton shaped like an Octopus which goes ins rampage in the final acts was a polite "f**k you" to the exclusivists: "Go ahead--tell me THAT isn't Steampunk enough."

But as I argued in my last post, echoing Jess Nevins, our discussions should be getting beyond this game of IS or ISN'T Steampunk. If we treat it as an aesthetic, then it becomes a discussion of how that aesthetic is applied, and what difference the aesthetic makes to the narrative, if any.

In the case of Heartless, we again see examples of social retrofuturism, with Alexia is at the far end of her third trimester with the "infant inconvenience," refusing to be sidelined from an investigation involving a potential plot to assassinate the Queen. On the basis of social retrofuturism, I could easily argue an oppositional "punk" attitude in an upper-class woman of the nineteenth century battling an automaton, negotiating the labyrinthine politics of vampire Hives, and orchestrating the rescue of a young werewolf, all while going into labour. The prevailing attitude of the nineteenth century towards pregnant women was that they were "semi-permanent invalids," and that  “It was dangerous for any woman to expend energy on anything other than her primary reproductive purpose, as the consequences could be grave not only for herself, but for her children” (King 18). Alexia's response to the Woolsey butler Rumpet's emphatic, "“But, my lady, you’re about to, well, uh, give birth!” is meant for comedy, to be sure: “Oh, that’s not important. That can wait” (Carriger 350). But it is also a moment where the nineteenth century is imbued with our twenty-first century sensibilities which reject "that woman’s highest fulfillment [comes] from motherhood” (King 9).

I am uninterested in converting those who simply don't find The Parasol Protectorate their cup of Darjeeling, but I am very interested in seeing an end to prescriptivist approaches to delineating what steampunk is. In his “Prescriptivists vs. Descriptivists: Defining Steampunk,” Jess Nevins identifies two approaches to defining steampunk: the prescriptivists, who adhere to Jeter’s definition of steampunk in Locus or Peter Nicholls’ in the 1993 Encyclopedia of Science Fiction, and the descriptivists, “whose preferred definition of the term is far broader than Jeter/Nicholls and reflects its current (shambolic) status rather than its past (traditional) use” (513). Nevins rightly identifies me as the “most descriptivist” (515) of the Journal of Neo-Victorian Studies articles in the steampunk issue, though this was not always the case. When I began my research, I looked to the definitions by Clute and McAuley in the EF, but soon found it was ill-suited to how newer steampunk had expanded since 1997. Likewise, Hantke’s article only dealt with steampunk up to 1999, when it was still largely a literary category. Interviews with early steampunk writers Tim Powers, James Blaylock, and Rudy Rucker were equally useless for application to current steampunk, as the writers openly admitted they knew little of current steampunk literature, let alone fashion or art. It became clear that in order to construct a definition of steampunk, I would need to immerse myself in primary research. In short, many of my findings and conclusions are original. As Nevins states, I am a descriptivist: my work is evidence based. Having read some 60+ steampunk novels in their entirety, I am treating the texts as artifacts, and basing my conclusions on textual evidence. The project of identifying the aesthetic alone is the first and arguably most important step in steampunk studies, in the process of offering a critical vocabulary for the discussion of steampunk.

My approach to researching steampunk has been to observe what it is, not what I want it to be. While this is a slippery enterprise, given the ever-changing nature of culture and art, I find it a better approach than prescriptivism. Prescriptivism implies we know what steampunk is without looking at evidence. This permits definitions of steampunk without any basis in evidence, often based on what a critic or fan thinks steampunk ought to be, as though it were a religious or political aspiration rather than an aesthetic.

I am glad to see Nevins' recent call to move beyond binary approaches to what is or isn't Steampunk. Both Nevins and Cherie Priest are advocating a spectrum approach: I had suggested something similar last April at the CNSE in Toronto, when I explained why I prefer speaking of Steampunk as an aesthetic, not a genre. As you can see from these slides, we discussed how one episode of Doctor Who, "The Girl in the Fireplace," can contain a great deal of the Steampunk aesthetic while another, "School Reunion," contains very little (the joke of course being that any episode that shows the interior of the TARDIS uses the aesthetic). 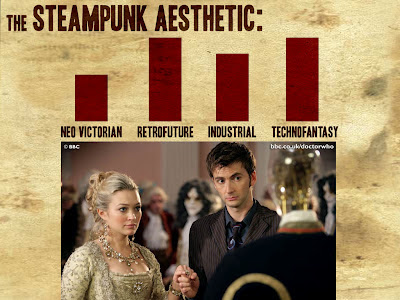 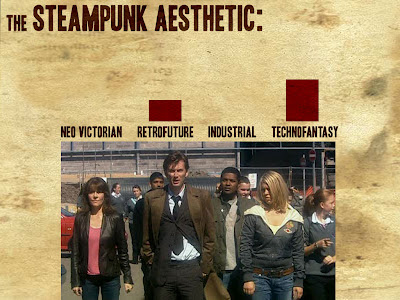 Popularly, genre is a classification we use to help us choose our reading or viewing. In fan circles, genre is one more excuse to engage in snarky pissing matches: is this SF, or is it just space opera? Is it hard or soft SF? Supercilious fanboys use such designations to create exclusivity: Moorcock is steampunk, Carriger is not. I advocate a broader approach, though not an entirely delimited one. In this way, we can speak of the "steampunk features" in The Diamond Age without losing sight of its the post-cyberpunk elements. We can talk about how Firefly is related to steampunk without getting into a massive pissing match over whether it's space opera or steampunk.

Likewise, we can talk about the steampunk features of The Parasol Protectorate books while admitting they contain elements of paranormal romance, the comedy-of-manners, and detective fiction. And in the case of Heartless, we'd be investigating many steampunk features. However, rather than reduce those to steam-powered automatons, I'd prefer to focus on a "lady who scurried around whacking at automatons and climbing into ornithopters," (60) who believes "the running of her household was best left to the gentlemen" (64), a position traditionally held by women, and who "spent a goodly number of years immersed in books . . . [attending] Royal Society presentations" (97). While steampunk technology is all good and fun, if we learned anything from The Difference Engine, it's the differences the difference makes that matters.