Company of the Dead by David Kowalski 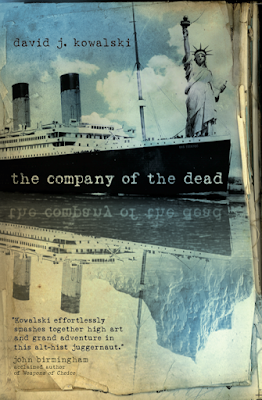 I've been a Titanic buff since I was in grade one: I remember the moment I first became aware of the Titanic, working my way through a sticker book of ships. It was back when you still had to lick the stickers, which had a mildly pleasant taste to them. The trick was always to match the sticker to the outline it needed to occupy in the book, and the outline of the Titanic stumped me. Initially, I couldn't make sense of the odd outline in the book. Then, when I matched the sticker, I was stumped as to why so much of the ship was missing. I hadn't fully mastered reading, and had to ask my dad to clarify some of the terms. He explained the disaster to me, and it haunted me for days. I took to drawing the stern section angled up out of the water.

In grade two, I bought a special illustrated edition of Walter Lord's A Night To Remember, and, having largely mastered reading (I would read 20,000 Leagues Under the Sea for the first time this year), I set about the equally titanic task of getting through the book. That winter, my dad helped me build a model of the ship. When Titanic movies came on television, I was given permission to stay up late to watch them. In grade four, I read Clive Cussler's Raise the Titanic! and saw the dreadfully boring film version.

The discovery of the wreck was a revelation to me, but I was too busy navigating adolescence to pick up any of the issues of National Geographic that covered the expedition, an oversight I've regretted many times. I dogeared the school library copies though, and was amazed by Ken Marschall's renderings.

My interest in Titanic waned in my late teen years and by the time rumours surfaced about James Cameron's film version, it was but a fond childhood memory. Nevertheless, my copy of A Night to Remember and The Greatest Disasters of the 20th Century had followed me everywhere I moved, and the night after I saw an early screening of Cameron's blockbuster, I was back reading Walter Lord. The next year, my band released its final CD, the last half of which was a concept piece on grief using Titanic as the primary metaphor. I wrote and directed a play based on the events in Lifeboat No. 6. Hell, I even own a model of the Titanic that will sink if you flip a counter-weight, breaking in half after the bow dips beneath the water. I saw the movie numerous times, and yes, I am a fan. Haters, go somewhere else to leave your comments.

So, needless to say, when Titan books sent me David Kowalski's The Company of the Dead, I was very excited. The cover is brilliant. The mirror image of the Titanic at sea, features the story we are perhaps over-familiar with as a mere reflection in the water, indicating it is not the primary reality. The primary reality, the one casting the reflection, shows Titanic coming into dock in New York city as it passes the Statue of Liberty.

It's brilliant, because it's both true and false, and is accordingly, an excellent cover for Kowalski's book, which has its own labyrinthine maze of true and false starts. I'll say more about this later, because I want to intrigue readers who aren't interested in spoilers.

Alternate history is about the break in history when, in this case, someone literally ziggs instead of zagging. Due to the intervention of mystery man Jonathan Wells, Mr. Fleet is equipped with a special pair of binoculars so that when the Iceberg is sighted moments earlier than history, the Titanic dodges its appointment with fate: ""He could feel it. The flutter of butterfly wings that would herald a brighter, better world" (9). The next chapter jumps a century into the future, to our time, as the Titanic comes into New York, captained by John Jacob Lightholler, a descendant of the heroic Second Officer of history. But we realize very quickly the ramifications of the Titanic averting Thomas Hardy's  "Convergence of the Twain." This is one of those true-and-false moments in the book, since a lazy reader may have missed the 100 year jump, and would assume the Titanic is rolling into New York on April 14, 1912. Nevertheless, it isn't the 2012 of our time stream, as the description of New York demonstrates:


Giant airships slowly descended from the heavens. German Zeppelins competed with Chinese Skyjunks and Confederate dirigibles, bearing messages of greeting in a host of languages. A century overdue, but heartily welcome, the Titanic nudged her way into New York Harbour. (16)

The next chapter reveals that New York City occupies Japan's Eastern Shogunate, and that the Japanese-Russian peace talks had just been held on board Titanic. Lightholler receives a visit from Joseph Kennedy, "an agent of the Confederate Bureau of Intelligence" who, as the novel goes on, reveals he knows history has somehow gone "wrong" and needs to be put "right." What ensues is a sprawling tale of espionage, adventure, alternate histories (yes, I said histories), and time travel. None of those things are spoilers - teasers, maybe, but not spoilers.

Fans of alternate history, the ones who want to see some serious rigour applied to the counterfactual ramifications of John Jacob Astor surviving to have influence in American politics in the twentieth century need to check this book out. As a kid, I fantasized about traveling back in time to avert the disaster: Kowalski reminds us all that while Titanic's sinking was a tragedy, it was a tragedy that changed the fate of the century. After all, unlike other notable disasters of the past one hundred years, this one involved an disproportionately large number of major movers and shakers. The men who stalwartly remained behind while their wives and children boarded life boats were history makers. Kowalski knows this, and explores it in a way that takes an oft-told tale and renders it fresh. The history of the Titanic is here, but not in a manner that rehashes what we already know. It looks at it in the lovely "what if?" sense of alternate history.

Kowalski does something very clever here in his opening chapters: he makes several statements like his note on the closed-circuit screens on board the 2012 Titanic as "the only anachronism permitted aboard his floating memorial" (13). It's clever because the reader assumes this is the same Titanic that averted an ice berg in the previous chapter. But it's not. We won't discover this for several chapters, until Kowalski returns us to April 15, 1912, and the ship strikes a different iceberg. The ship still sinks, despite Wells' intervention, but John Jacob Astor survives. The future changes. America does not enter World War II. And a century later, Germany and Japan are world powers racing to develop a nuclear bomb.

Kennedy and Lightholler's quest is to set things "right." Thankfully, Kowalski isn't overly simplistic here either. In a Borgesian "Garden of Forking Paths" moment, the heroes will discover late in the book that their attempt to stop Wells on board Titanic has not been the only one:


"It's not carved in stone," Wells was staring at the embers. "It's writ on water. There are a few lifeboats left. We can leave anytime we like."
Kennedy nodded back, absently.
"I'm usually dead by now. Gershon usually kills me in this timeline."
"He shoots you in your cabin," Kennedy replied.
"We're never here, talking like this." (829).

Later, another character will engage in musings akin to Leibniz's, reflecting that "this world was no paradise. It was not, by any stretch of the imagination, the best of all possible worlds. It was the only possible world, and it had been given a reprieve" (855). I quote these sections, not as spoilers, but rather to demonstrate that Kowalski is a student of history who has wrapped that rigour in a cloak of page-turning adventure. It's precisely the sort of book people who appreciate a well-thought-out counterfactual will enjoy. The characters are engaging, and Kowalski isn't afraid to kill some along the way. The historical stakes are very high here, and The Company of the Dead gives them their due.

So whether you're a Titanic buff, spy-thriller aficionado, or an alternate history fan, The Company of the Dead has something for you. At just over 870 pages, my spoilers are but the iceberg above the surface. There are many more surprises waiting beneath the water line.