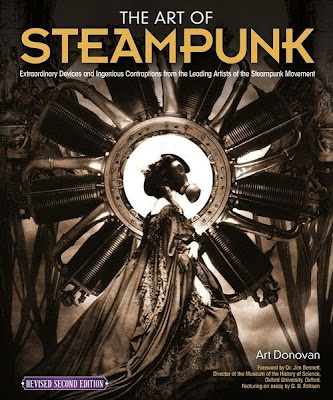 I came across Art Donovan's incredible Shiva Mandala in 2009 while retooling my lecture on Captain Nemo for the first Steamcon. It was gorgeous, and seemed to be a concrete representation of the three lives of Nemo in Verne, if one ignored the Craniometer at the bottom. I sent Art a request to use images of the Shiva Mandala in my Nemo presentation, and he graciously assented. So Art and his steampunk creations have been on my radar since early in my research. 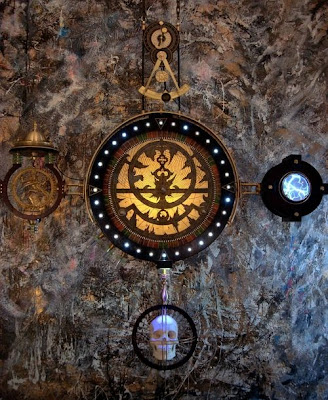 For obvious reasons of proximity, I was unable to attend the Steampunk art exhibit at the Oxford Museum of the History of Science in 2009/10. I saw images of the exhibit on the web, but steampunk images on the web were already a dime a dozen, and so the event made no lasting impression on me (I was busy with focusing on steampunk, so the art had become tertiary in my attentions). Since that exhibit, the first of it's kind, the exhibit saw a second life in the 2011 publication of the first edition of The Art of Steampunk. I was hip-deep in full-time teaching and finishing the first major draft of my dissertation, and could do no more than smile at seeing Art's name on the cover of a book in a Michael's craft store. 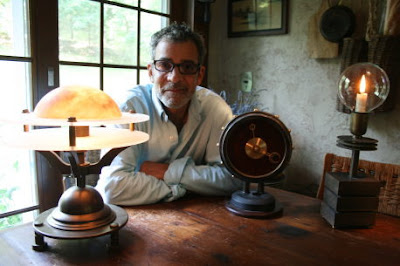 So it was with some pleasure that I received a review copy of the revised second edition of The Art of Steampunk. I don't normally review steampunk art books. Prior to this, my only other review was for Thomas Willeford's excellent project book. While Willeford's Steampunk: Gear, Gadgets, and Gizmos is a great book for those wanting to dip their toe into the world of being a Maker, it has small value for the steampunk scholar. Donovan's Art of Steampunk is of arguably greater value to the academic, since it acts as a print artifact of the exhibit. If steampunk images online were a dime a dozen a few years ago, they're less than a penny now, adjusted for inflation back to the nineteenth century.

An academic study of steampunk art would face a tremendous challenge, far beyond the one I faced in my literary study. Focusing on which books to study for steampunk research would be relatively easy compared to the deluge of devices, contraptions, and artworks a Google search for "steampunk" produces. And while I'd never claim that the art in The Art of Steampunk is comprehensive, it is indicative of what I've seen at conventions and online. It also has the distinction of being the record of a museum exhibit, which indicates a certain level of exclusivity that academia tends to celebrate. And before I am accused of being a snob, please understand, I'm merely showing how The Art of Steampunk could prove a valuable tool in playing the game of academia. Instead of trying to choose from millions of images, the steampunk scholar can use Art of Steampunk to focus their attention on selections from these 26 artists. The second revised edition further highlights how steampunk art continued to change from 2009 to 2013, with 8 artists added to the original 18. 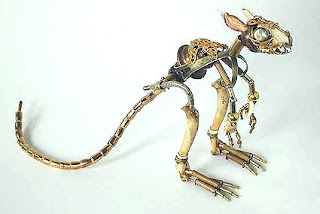 In addition to curating works by some of the best (or simply best-known) steampunk artists in the world, the collection housed in The Art of Steampunk's pages is also global, featuring work from Japan, Canada, Belgium, Australia, Switzerland, the Netherlands, the U.S., and the U.K., which would be valuable to steampunk studies in Comparative Literature. The diversity of the art is not only national, but stylistic. A Google search for Steampunk art can turn up pages of digital paintings, modded computers, Etsy jewellery, and neo-Vic fashion, with nary an image like Jessica Joslin's fantastic creatures, Stephane Halleux's whimsical figurines, or Mikhail Smolyanov's gorgeous motorcycle designs. 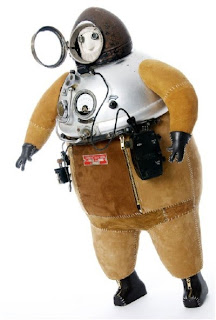 What Art of Steampunk offers the casual or critical reader is a concentrated, dare I say, canonical collection of steampunk art, along with thoughtful forewords and prefaces by Donovan and Dr. Jim Bennett (director of the Museum of the History of Science), with a strong essay by G.D. Falksen. It is always valuable for the academic to have someone else's statements to work off of, even (or perhaps especially) when you don't agree with them. In this case, I'm largely in consensus with what is said about steampunk in these pages. I especially appreciated the sign that hung at the entrance to the exhibit, which said that, while "steampunk is rooted in the aesthetics of Victorian technology . . . it is not a nostalgic recreation of a vanished past" (33). That's a statement I can really get behind.
Email Post
Labels: Art Researching Steampunk