Doctor Who: The Girl in the Fireplace

In the early years of my research, I was often asked the question, "Is Doctor Who steampunk?" While I haven't been asked the question in some time, the relationship between Doctor Who and steampunk has lingered in the back of my mind, and even formed part of the slideshow for my presentations on the steampunk aesthetic. This series, "The Advent(ures) of Doctor Who" is the realization of that idea.

As faithful readers of the blog know, I define steampunk as a tripartite aesthetic (thanks to Aaron Sikes for that term!), comprised of hyper-Victorianism (originally neo-Victorianism, but in the past three months, I've revised the term), technofantasy, and retrofuturism. New readers will find a summary of the tripartite aesthetic here. So I'm not interested in asking if Doctor Who is part of the steampunk genre, but rather, "In what ways does Doctor Who make use of the steampunk aesthetic?"

Brian J. Robb, in his excellent coffeetable book Steampunk: An Illustrated History of Fantastical Fiction, Fanciful Film, and Other Victorian Visions (one of my top five steampunk books of 2012), in the chapter "Doctor Who and Steampunk: Victorian Style," rightly notes that the steampunk aesthetic was first applied in force in the design of the TARDIS in the 1996 TV movie featuring Paul McGann as the Doctor:


The expansive new console room was still centered round a six-sided control podium, but this one was much more Gothic in style. This console tended more heavily towards the brass-and-wood look of the earlier secondary console room, with the levers, switches, and valves of the earliest 1960s version emphasized. Additionally, the TARDIS featured an expansive library area in which the Doctor is seen reading Wells's The Time Machine.
When the regular TV show returned in 2005, it was the McGann console room that inspired every variation thereafter, making more than a dash of Steampunk central to the series' ongoing look. Christopher Eccleston's ninth and David Tennant's tenth Doctors' console featured a variety of anachronistic elements, including an old telephone, glass paperweights, a bell, a locomotive water sight glass and a bicycle pump--each a stylized control for different functions. For example, the bicycle pump was once identified as the 'vortex loop control'.
The 2010 reinvention of the control room for Matt Smith's eleventh Doctor was perhaps the most overtly Steampunk to date, with multiple levels and an 'engine room' area beneath the console which itself was positioned on a glass floor. As before, each of the weird anachronistic contraptions had a specific function: a physical handbrake was the 'lock-down mechanism'; a spinning, spiky ball was an 'atom accelerator'; while an old computer keyboard was the 'spatial location input'. Other items included a Bunsen burner, a microphone, a water dispenser, and an analogue typewriter. (103)


However, I first heard the question of whether Doctor Who was steampunk in the year prior to the advent of Matt Smith's incarnation, so there is more to the answer than simply replying, "The recent TARDIS designs use the steampunk aesthetic." This is why I chose "The Girl in the Fireplace" as the first in my Doctor Who series, for the episode is undoubtedly among the handful which spawned the question "Is Doctor Who steampunk?" 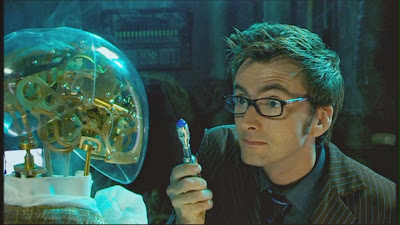 Detractors will immediately balk at the time period of the episode, which is eighteenth century. They may even point at that tripartite aesthetic saying, "you even said Victorian! What did you mean by that?" Remember, I do not define steampunk as a genre, which might constrain the story to take place in the nineteenth century. Steampunk stories take place in number of temporalities, from ancient Rome in "Oracle Engine" in Candlewick's Steampunk! anthology to the far, far future in Dancers at the End of Time by Michael Moorcock. In all cases, these stories evoke the nineteenth century in some form or another through the other two elements of the aesthetic, technofantasy and retrofuturism.

The steampunk aesthetic is clearly at work in "The Girl in the Fireplace," most obviously in the design of the clockwork men who stalk the episode's eponymous lady-in-distress; these automatons are clearly built with the steampunk aesthetic in mind. Whatever hipster naysayers might say about the cog needing to die in steampunk, it's part of the aesthetic's iconography - as I will argue shortly, it isn't that the cog needs to die, but it needs to stop reproducing at an alarming rate. And aside from the TARDIS, that's about all that's steampunk in this episode of Doctor Who. So the answer to the question, "Is Doctor Who steampunk?" is "no." But then again, I'm not sure that Michael Moorcock's Dancers at the End of Time is steampunk in the sense of a set of purely narrative conventions. It does not feature airships, goggles, or corsets worn on the outside. It does not feature a 'punk' ethos against empire in the same way that Moorcock's Warlord of the Air does. These narrative tropes are commonly used as "must-have" elements in steampunk writing, and to be frank, this narrow narrative demand appears to be killing steampunk publishing. 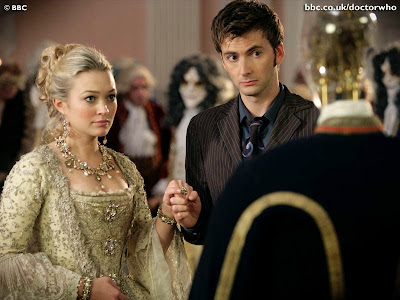 I've heard reports from several sources in the publishing industry that steampunk is no longer the hot commodity it was only a few short years ago. While this is only conjecture, I'm suspicious that needlessly strict adherence to a limited range of narrative conventions flooded the market with too many titles which became viewed as creatively shallow derivations of other second-wave steampunk. While this could be the steampunk equivalent of Eddie Vedder of Pearl Jam and Scott Weiland of Stone Temple Pilots using similar vocal styles because they sang-along to the same artists, steampunk publishing hasn't tried very hard to establish creative distance between different works. There are multiple steampunk series with a title formula along this line: Exciting title: a (insert name here) and (another name here) adventure/escapade/lark/quest/thing. Most steampunk covers are done by photo-manipulating a steampunk model in cosplay, further restricting the idea of how the aesthetic ought to be applied.

Meanwhile, I'm noticing a steampunk second-life, where the aesthetic, perhaps tired of being pressed into service for badly-written indie-ebooks, poorly-voiced audiobooks, and second-rate comic books (Aside from Lady Mechanika, there hasn't been a decent new steampunk comic release in the last two years), is popping up as an element of a narrative, rather than its focus, like the doomsday device in Cabin in the Woods. It's not a steampunk movie, but it's a movie with a steampunk-inspired device. It's as though the aesthetic looked at how it helped out in one of my favorite Doctor Who episodes and decided to do its best work, not by allowing itself to be vomited all over every page of a book, or every moment of a film, to be lightly sprinkled, like seasoning. 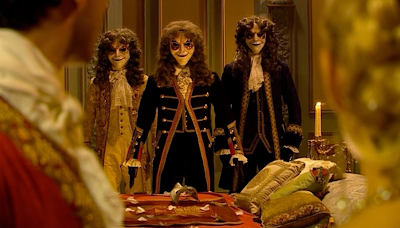 "The Girl in the Fireplace" is not a cherished Doctor Who episode because of its steampunk elements. It did not win the 2007 Hugo Award for Best Dramatic Presentation, Short Form for the design of its creepy automatons. The clockwork design is why I ended up watching it early in my travels with Tennant's Doctor: nearly every instance of "Is Doctor Who steampunk?" was often followed by "Have you seen 'The Girl in the Fireplace?', but it is not why I cry when I watch it. The episode would have been brilliant if the automatons had been sleek, i-Pod style designs beneath those masks. "The Girl in the Fireplace" is a great Doctor Who episode because Steven Moffat gives Tennant one of the Doctor's best character moments in the history of the series. I don't need to go into details about this - if you know the episode, you know what I mean. If you don't know the episode, words will far short of conveying the poignancy, so get thee to a Time Tunnel immediately.

But it illustrates why viewing steampunk as an aesthetic is crucial to what we call steampunk publishing becoming something that publishers salivate over, rather than force bile down for. Steampunk writers and, as it turns out, scholars, face a claustraphobic pigeon-holing if they persist in viewing the aesthetic through narrow lenses of airships, goggles, top-hats and corsets. Don't get me wrong - I love all three. But the idea that steampunk is always "ADVENTURE!" is probably why my top picks for this year's steampunk reads include works like Jean-Christophe Valtat's Luminous Chaos, which is a great piece of writing before it's anything else. It does not feature airships, goggles, top-hats, or corsets. It is very much a piece of steampunk in that it is neo-Victorian technofantasy, and abundantly playful its retrofuturism. But Valtat doesn't seem to have set out to write steampunk. He seems to have set out to write a story, and chose elements that, in combination, bear resemblance to the steampunk aesthetic. If it were realized as film, it would have steampunk elements throughout. 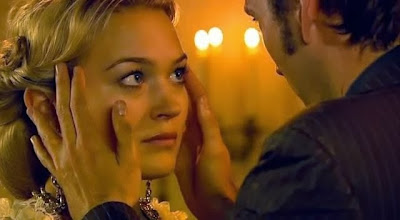 But it would still just be a good story, even if those were muted, and downplayed. If your setting is fantastic but your writing is poor, you have things backwards. Make your writing fantastic, and if it suits your story, add, to use Robb's wording, "a dash of Steampunk." And if you need an idea for what that looks like, just watch "Girl in the Fireplace" again, to remember that good characters in interesting situations will always interest viewers and readers. Clockwork and corsets are just window dressing.