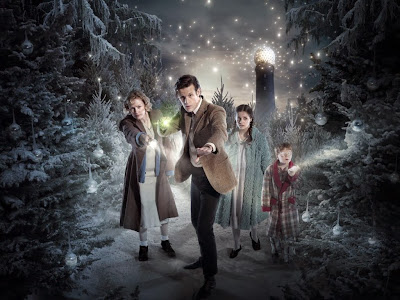 At the 2009 Eaton Science Fiction Conference in Riverside, California, SF writer Rudy Rucker commented that the Wardrobe of C.S. Lewis' Narnia chronicles was just another way of traveling to another world, no different from spaceships, transporters, or entering virtual space. It was an inversion of Lewis' own reflections on the idea, when he stated that "I took a hero once to Mars in a space-ship, but when I knew better I had angels convey him to Venus." If ever there were a quotation to sum up the blurry lines of science fiction and fantasy in "The Doctor, the Widow, and the Wardrobe," it would be that one, slightly modified: "I took a hero to Narnia in a wardrobe, but when I knew better, I redesigned it as a dimensional portal...thingie."


It is also the quotation that springboards me from being the Steampunk Scholar to rebranding the website as the Speculative Scholar, and I'm going to use "The Doctor, the Widow, and the Wardrobe" ("DWW"), to explore a bit of what the blog will be like in the New Year.

The bulk of the content will still be a short article, that talks about an aspect of speculative fiction. "DWW" has a mix of all three of the literary genres John Colombo states make up speculative fiction:  Science Fiction, Fantasy Fiction, and Weird Fiction (we might say Horror for this last one). "DWW" might not be fantasy itself, but it certainly makes fantasy references in drawing Act I of the episode from C.S. Lewis's The Lion, the Witch, and the Wardrobe (LWW). Certainly, there are minor differences - in LWW, a young girl goes through a portal into another world via a Wardrobe; in "DWW," a young boy goes through a portal into another world via a huge Christmas present. As Rudy Rucker suggested, they are simply devices for getting us into another realm. In LWW, it is magic. In  "DWW," it is technology. We call one fantasy, another science fiction, but in both cases, a small child ends up with in a snowy wonderland beyond the pale of our reality. 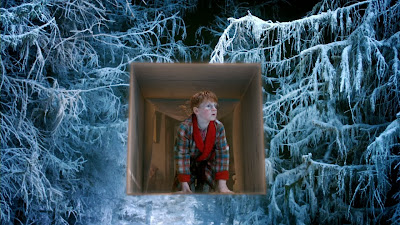 But there are further permutations of what be understood as the aesthetic differences between science fiction and fantasy- just as LWW's fantasy wardrobe is rendered as "DWW's"science fiction dimensional portal, the gleaming rocket ship of SF's golden age is made into a flying fantasy tower, powered by the magic of the wooden king and queen. The boundaries of science fiction and fantasy are regularly blurred throughout the episode, much to the delight of someone like me, who doesn't care much for those boundaries in the first place.

Now some might balk that "DWW" has any horror in it, but that would only be those who have long since grown out of their fear of things that go bump in the night. It was plenty scary enough for my children, both from the perspective of the episode beginning with the loss of a parent, and moments with the Wooden King and Queen. These are childhood horrors - the mute creepiness of the Wood Sovereigns, the need for a young priest and an old priest when they speak through others, and above all, the horror of losing a parent. This is a foundational fear of childhood, one I suppose we forget. But as  parent, I could witness my own children's horror, and mirror Madge's horror as a parent who has lost her children. Certainly, it is Doctor Who, and therefore it is a secure horror, but it is a form of horror nonetheless. 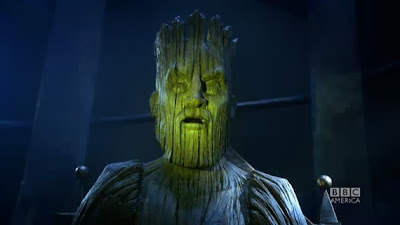 Doctor Who is a lovely bricolage of fantasy, SF, and horror elements, pulled together in a speculative soup that continues to delight viewers. And it's a soup I find myself not only needing more tastes of, but also desirous to engage in a similar mission to the one I began with steampunk five years ago. So as with the Doctor, I am undergoing a regeneration - a rebranding. After the top 5 steampunk list next week, the blog will cease to be The Steampunk Scholar and will become The Speculative Scholar. This is not to say I am the only scholar of this nature. Rather, it will be to say that this blog will function as a resource for speculative scholars, and I hope in time, a hub for other speculative scholars to assist in the production of the content.

I will continue to talk about steampunk, but I want to begin disseminating other scholarly studies I've been doing in Giant Monster films, Robert Jordan's Wheel of Time series, the relationship between World Literature and speculative literature, and really, any area of speculative fiction that appeals to my research interests. Thank-you to everyone who came along this far for the steampunk journey - now, let's step into the virtual TARDIS and see where it takes us. After all, what's the point in being a Doctor if you aren't going to take advantage of traveling through Time and Space? 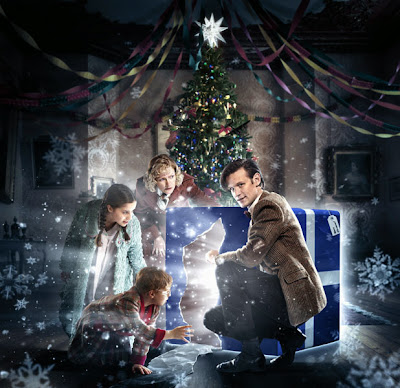