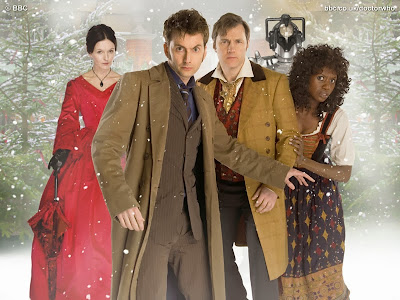 My research kept me from enjoying a lot of geek content between 2008 and 2012. I spent most of my "free" time reading steampunk novels, their antecedents, and secondary sources related to the topic. So while my friends were ranting about how great David Tennant was as the latest incarnation of the Doctor, I was reading Scott Westerfeld's Leviathan series. Not a bad trade off, but it made me a latecomer to many speculative-fiction TV series and films. Luckily, on the flight back from my in-laws at Christmas of 2009, I caught bits of "The Next Doctor" broadcast on the Canadian Space network.

The last time I'd seen the Doctor was the 1996 TV movie. Before that, I'd been an ardently faithful follower through the reruns of Pertwee, Baker, and Davison on PBS in the 1980s. I had an issue of the Marvel Premiere Classics featuring Doctor Who (reprints of comics from Doctor Who Magazine, I understand). I had read several novelizations of the series from my Public Library, and even owned one! Fans of Doctor Who from the 1980s, especially those living in smaller cities, will know how tough Who-Merchandise was to come by back then. But my work as a minister didn't offer opportunities for journeys through Time and Space with a Time Lord. Then came the revamped series, and there I was, busy researching steampunk. 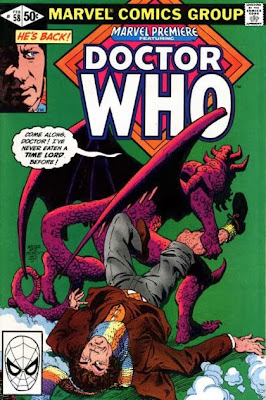 As I mentioned in my last article, many people had asked me if Doctor Who is steampunk. I'd say it shares a lot of values and ideas that steampunk uses. But on that post-Christmas flight, I didn't much care about whether the show was steampunk. I was too busy being twelve again. I remember the moment David Tennant as The Doctor and David Morrisey as the Next Doctor yelled "Allons y!" and the theme music started, I cried: fast, spontaneous, unexpected tears. It happened to me again the other day when I was reviewing this episode for this series of posts. It's not a sad moment - there are better reasons to cry in this episode. It was sheer nostalgia, taking me back through time and space to the days when I'd stay up late during a PBS fund-raising campaign, when they'd play entire serials back-to-back. I'd tape them on our Betamax to watch over and over. I began writing my own Doctor Who scripts, to film on that same Betamax system.

I was transported back to a simpler time, when I thought I'd grow up to be a film maker. Since it was one of the Christmas specials, my nostalgia was compounded, since Christmas memories of my childhood are particularly fond. Given the episode's emotional appeal to a Husband/Father, I never stood a chance.  I've since learned that "The Next Doctor" isn't considered a particularly superior installment of the new Doctor Who series, but that doesn't matter much to me. It was the first of the new series I was exposed to, and so it will likely always have a special place in my heart.

Having finished my research, I found my recent re-watch a very different experience, once I'd wiped my tears away. While my first viewing transported me to my childhood, my second viewing had me traveling back through my research, thinking about how the episode makes a number of steampunk, or at the very least, neo-Victorian moves. This isn't about the Cybermen or their technology - they aren't particularly steampunk by design. And I pondered how I could write on any of these: how Rosita Farisi as a black woman in Victorian London is an example of social retrofuturism, or how Miss Hartigan is a nicely subtle dig at the treatment of women in the nineteenth century, but is likewise an interesting choice for the overlord of the Cybermen. But that wouldn't be moving forward. That would be me traveling ground I already have. 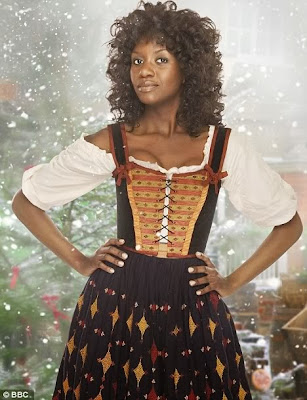 Five years ago, I started my "mission" to get my dissertation on steampunk written. I finished that mission a year early, but kept the blog going in the same way I had before. Anyone who has been watching Steampunk Scholar this past year will know how ineffective that was. I still enjoy steampunk, but I want to broaden my horizons, to start a new mission that travels more widely through time and space.

Some of my tears upon seeing "The Next Doctor" for the first time were for twenty years of lost time. When I professed Christianity as a teen, I felt compelled by 1980s evangelicalism to give up a lot of my geek interests. I played Middle-Earth Roleplaying in secret. I threw out a bunch of books that a well-meaning but sadly over-zealous friend deemed "occult." I tried to marry my love of SF and Fantasy with my church work, but it didn't go well. Prior to the success of Peter Jackson's Lord of the Rings and The Matrix as appropriated parable, fantasy and SF weren't all that welcome in the church.

When Morrisey as the Next Doctor realizes that he is really Jackson Lake, a man who has "lost something," I remember tears flowing again. My research had already taken me to three fan conventions, where I felt more at home than I ever had all the years I served as a minister. Getting dressed up as "The Steampunk Scholar" and hanging around with a hotel full of geeks felt more right than any church event ever did. Every time I thought of all the years I'd had to sideline my love of comics, Science Fiction, fantasy, horror, and roleplaying games, it made me sad. "The Next Doctor" was a reminder of the great gap between when I'd dreamed of producing geek content, and when I finally came around to doing that, twenty years later.

But it also reminded me that I had interests outside steampunk: Clive Barker's writing, pulpy Sword-and-Sorcery, Robert Jordan's Wheel of Time series, Terry Pratchett's Discworld, Superman, John Carpenter's movies, and Godzilla. I never fully lost these things, but I had to repress them - my occasional geek footnotes in morning sermons were often pearls before swine.

I love what steampunk has given me: I don't think a dissertation on Nine Inch Nails' Year Zero as dystopic intertext would have resulted in the situation I find myself today. I have a very active web presence, have never had to work hard to get academic publishing opportunities, have met a number of key authors in the steampunk scene, and have traveled (and continue to travel) to speak on steampunk at conferences and conventions. I chose to write on steampunk at what was arguably the best time to do so. I rode that wave, and enjoyed it immensely.

But I love the non-Victorian episodes of Doctor Who as well. The theologian in my loves "The Satan Pit," where the Doctor gets to mock the "devil," something C.S. Lewis posited Old Nick can't stand: "“The best way to drive out the devil ... is to jeer and flout him." The fanboy in me loves "School Reunion," partly because I had an adolescent crush on the late Elizabeth Sladen, and because I love seeing Anthony Head or any Buffy the Vampire Slayer alumnus getting good work in geek circles.

And I want to write about all those things. When I talked with J.M. Frey about this, she said that this series on Doctor Who was possibly one of the best ways to transition from being "The Steampunk Scholar" to . . . something else. In 2014, I will be changing what I'm doing online. The TARDIS provides the possibility to go anywhere, like the blue police box TARDIS, not the hot-air-balloon Jackson Lake TARDIS, which cannot go beyond the boundaries of the nineteenth century. 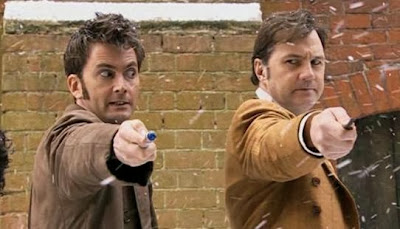 One mission ends, another begins. It doesn't mean I'm done writing about steampunk. There are steampunk explorations left. But like the Doctor, I want to travel the whole universe of speculative fiction - cinematic, comic book, literary. Maybe that's why I teared up when the two Doctors yelled "Allons y!" this time - after all, it's French for "let's go!" In the words of Tennyson's Ulysses, "’Tis not too late to seek a newer world," or in this case, worlds. Allons y!