Spotlight on J.M. Frey, author of the forthcoming Skylark Saga! 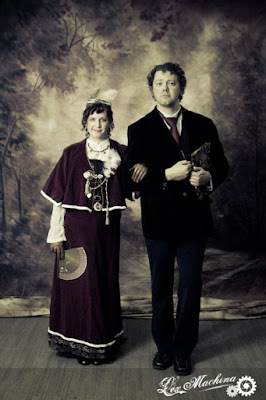 Reuts Publishing announced this morning that they've signed a three-book deal with science-fiction/fantasy author J.M. Frey (rhymes with Sci-Fi!), for the Skylark Saga, with the first book due out in 2017. This is really exciting for me, as I've been waiting for this book since I first met J.M. Frey back in 2011 at the Canadian National Steampunk Exhibition (CNSE). Frey was foisted on me during my first presentation, something I normally chafe at, but since it was Liana Kerzner who had paired us up, I was willing to play nice. Just as I had been blown away by Liana when we co-presented the previous fall at Pure Speculation, I was floored by how quickly Frey jumped into the fray, ad-libbing reading parts of my slides and bantering with me as I presented on steampunk. By the end of the weekend, we had become fast friends, beginning a friendship through social media that has lasted since. 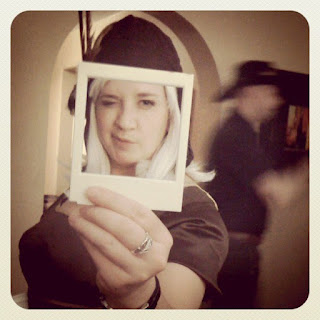 At the end of the second day of the CNSE, I caught up to Frey in the Green Room, where she was sporting a platinum wig and what looked to be an aviator's outfit. I soon learned this cosplay was of the lead character in a steampunk book she was working on called The Skylark's Song. I filed the information away, as the number of people you meet at steampunk conventions who are cosplaying as a character from the book they are working are legion. My reservations were obliterated the next day when I cracked the book she had given me to read: Triptych, her first published novel, which sported a blurb from Publishers Weekly promising that this was a "deeply satisfying debut. 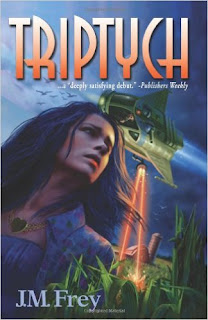 Only a few pages in, reading while eating in an airport restaurant, and I was jaw-dropped by how good Frey's writing was. The first line was so powerful: "A body collapsing with no muscular control onto plush carpeting makes a kind of muffled thudding, all raw meat and cut strings." So she's a word-smith. The scene is a domestic shooting...a husband, a wife, and an...alien? Like any good writer, Frey knows to unleash crucial thematic information in the first pages. While Triptych is about time travel, its trump card is what it does with the domestic setting, with that husband, wife, and alien. Like Ursula K. LeGuin, Frey uses SF to explore social spaces that are alien to the reader, and to do it in a way that causes one to ponder the sexual and social norms of modern North American society. I can't say more, because more would be a spoiler. And I refuse to spoil Triptych, because it's such a treat. I just didn't have time to tell the web about it back in 2010, while racing to finish my PhD.

But as soon as I finished Triptych, I wondered when Skylark would see the light of day. After all, Triptych was great -- shouldn't her agent be striking while the steampunk anvil was hot? For one reason or another, Skylark got shelved, and my opportunity to crow very loudly about Frey's writing through this blog passed away. Ostensibly, steampunk was no longer the hot, hip thing it had been in 2009.

Then Frey announced she had a deal with Reuts Publishing for a fantasy trilogy beginning with The Untold Tale, and it seemed like I'd have something to talk about over at my other blog, Doc Perschon. I can tell you already (working my way through the ARC) that The Untold Tale is up to par for Frey's writing, though it's far more whimsical than Triptych. It's more along the lines of her Dark Side of the Glass, a short piece which I highly recommend for people who loved Twilight, AND for people who hated it. Trust me. 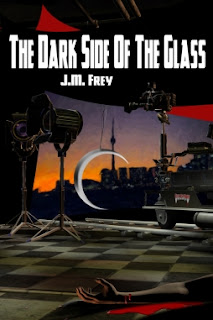 So it's with no small amount of excitement that I am happy to pass along the good news that Skylark is finally going to see the light of day. Aviator behind enemy lines in World War II with a rocketpack? I loved The Rocketeer, how could I not want to read this book?

Here's the skinny on the story, ripped right from Frey's blog:


A flight mechanic with uncanny luck, seventeen year old Robin Arianhod was raised in the shadow of a decade-long war. Thrust unexpectedly into the pilot’s seat during a dogfight, Robin’s first flight proves her among the rare few girls with the strength to pilot the ornery Gliders. But the skies are stalked by the Coyote, a ruthless pilot who has earned his nickname by dishonorably picking off crippled airships and retreating soldiers.
When the Coyote shoots her down, Robin is forced to take shelter behind enemy lines. She’d be dead if anyone found out who she was, so the only way Robin can do her job – and stay alive – is to don a disguise, and the prototype rocket-pack she stole from the Coyote, to try to finish this war from the inside, to become… the Skylark.
The Skylark’s Saga follows The Skylark over three books as she tries to not only end the Saskwayin-Klonn war, but also put paid to the class feud between the Saskwayin Benne and her own people, the traditionally migrant Sealies. All while, of course, trying to figure out the origins of W.I.N.G.S., her wondrous rocket-pack, and to find the true King of Klonn and get his butt back on the throne… before the Coyote corners her into having to take it for herself.

So that's the good new: The Skylark's Song will take wing. But we have to wait until 2017 for liftoff, and that's the bad news. But in the meantime, I guarantee, as someone who has followed Frey on Twitter for years, that she'll be leaking lots of teasers, like this artwork of her main cast by Archia: So follow her blog. Follow her tumblr. Follow her tweets. In the meantime, order Triptych and read it. In December, get The Untold Tale, and learn, while waiting for her steampunk debut, that J.M. Frey is no one-trick pony. She's the real deal. And she's about to spread her wings. You'll want to be around for that, believe you me.