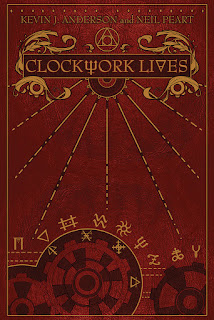 One of my great frustrations in my final year of studying steampunk was that, although I had Rush's Clockwork Angels to keep me company as I finished writing my dissertation, I never got around to reading Kevin J. Anderson's novel that accompanied the concept album. Thankfully, I was given a second chance in the form of the sequel, Clockwork Lives, which is first and foremost a gorgeous book. People who enjoy books as objects, especially when that object looks like the book inside the story you're holding, will appreciate the quality of the hardback of Clockwork Lives. It's designed to look like the alchemical book that Marinda Peake the protagonist of the story's frame narrative is carrying around. The quality of the paper, the fonts, and the illustrations all make for a very aesthetically pleasing art object insofar as the book as object goes.

The frame narrative of Clockwork Lives is Marinda's journey to collect stories. Marinda is very hobbit-like. She's lived out her life in mediocrity, enjoying the monotony of life in Lugtown, far from the great goings-on in Peart and Anderson's steampunk world. When her father dies, he passes this alchemical book along to her, with the mandate to fill it with stories. His is the first entry, "The Inventor's Tale." A drop of a person's blood on the pages of her alchemical book results in their story being written out in red letters. The premise is great, even if Anderson's prose doesn't always live up to the fictional conceit; he's a good storyteller, but his style isn't nuanced enough here to convey the breadth of voices telling their stories. Some might argue that's the result of the book telling their story, instead of the people themselves telling it. Nevertheless, when a thief who's lived his whole life on the streets is using the word "ostentatious," I'm experiencing some readerly dissonance. That stylistic flaw may not bother some readers, so it's a minor detractor. Max Brooks' World War Z had a similar problem, and it never bothered readers.

For me, the frame narrative is the weakest point.  Clockwork Lives ultimately falls short of an attempt to be a steampunk Canterbury Tales, which it evokes, if only in the titles of the stories - "The So-and-sos-tale." See, a frame narrative is supposed to do more than act like Elvira, Queen of the Dark introducing tonight's feature film. It's supposed to have something to do with those stories. The frame speaks to the tales and the tales speak back into the frame. I kept waiting for this to happen. I suppose that someone could argue that all the stories along with Marinda's work under the thematic idea in the book's epigraph: "Some lives can be summed up in a sentence or two. Other lives are epics." All the stories we read here are ostensibly epics in the way that epigraph is meant to be taken. They are tales of people who stepped outside the norm, who stepped to the beat of a different drummer (literally, since Neil Peart was the drummer for Canadian superband RUSH). This idea is certainly contained in the stories, sometimes too much so. I felt like I was being bludgeoned by the "rebels in a perfect dystopia" idea. What would have been really interesting would have been to have heard from those who fit into that world, rather than getting the lives of all the iconoclasts. That's a story worth exploring - how does one become a goose-stepping yes man?

I suspect Marinda's story is supposed to transform from a two line summary to an epic, but it's ultimately unengaging and lacking in narrative drive, even after she gets her rebellious groove on. And ultimately, that thread of raging against the steampunk machine isn't enough to string these stories together. Since Anderson is mainly a plot-focused, not character focused writer, I would at least expect there to be some sense of narrative cohesion to the frame narrative. I adore his Captain Nemo: The Fantastic History of a Dark Genius. And because of that book, I wanted to like Clockwork Lives. I liked the beginning. I like some of the stories. I never felt like it quite came together. By the final third of the book, I started skimming, just wanting to get to the end so I could be done with it.

However, if you read the individual stories without the frame narrative, I suspect it will be more than satisfying for most fans of light steampunk. I especially enjoyed "The Astronomer's Tale," "The Bookseller's Tale" and "The Fortune Teller's Tale." I also suspect that this book would be tremendously satisfying for younger readers who don't give a rat's ass about frame narratives and cohesion. I'll read Clockwork Angels before I make my final judgement call, but if Clockwork Lives is any indication, this is a steampunk world best experienced through Peart's lyrics, drumming, and bandmates' music.
Email Post
Labels: Rush Short Stories