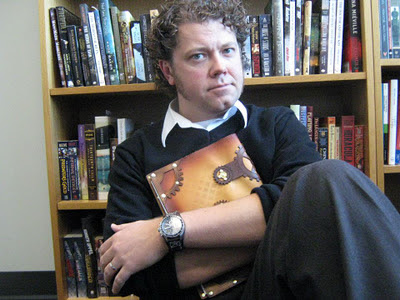 Three years ago, I published the first post here at Steampunk Scholar. At the time, I was still amassing my own steampunk library of primary sources. Now, I'm so flooded with ARCs I fall behind in my reviews. Thank you to the publishers who honour the blog by keeping me reading. I'm doing my best to give your authors more than a cursory or dismissive glance.

I think I'm finally back on track with posting for the blog, but anyone who's been with me for more than a year knows how tenuous a statement that is. I struggled this fall with keeping up with reviews and trying to finish a new article for publication, and edit and revise the first draft of the dissertation. While some say I need to drop the blog and focus on getting done, I gently remind them that without the blog, I wouldn't be where I am in my studies. So as an introduction to this post, thanks to everyone who keeps reading and commenting.

In 2010, I made my first "best of the year" list, since previous years simply didn't contain enough steampunk books to warrant such a list. 2010's list contained only five books, and although this year's deluge of steampunk permitted a lengthier list, I decided to keep it to five. This was a tough year in that respect, as I enjoyed many of the books I read, and wish I could include more. There's no point in suggesting "the best" if you're not being exclusionary. I should also note that this cannot be considered a comprehensive list: I haven't read all the steampunk published in 2011. My criteria is simple: the book must utilize the steampunk aesthetic as a core element of the book, it must be published in 2011, and cannot be a re-release. Otherwise, Titan Books' reprinting of Captain Nemo: The Fantastic Adventures of a Dark Genius by Kevin J. Anderson and Anno Dracula by Kim Newman would have made the list.
Honorary mentions:

Biggest surprise: How much I love the Vampire Empire series. If I'd had a sixth slot on the list, The Rift Walker would have been on it. While the covers made me think teen paranormal romance, the books are a superior blend of pulp-adventure, romance, steampunk, and neo-gothic elements. This is both a return to the monstrous in vampire fiction, while retaining the courtly machinations of Vampire the Masquerade and the young love story of Twilight. I am not understating when I say these books have everything most steampunk fans love in their fiction.

Biggest disappointment: Felix J. Palma's The Map of Time. See my review to see how this book got lost in translation, even with a map.

Best Audiobook: While the audiobooks for Carriger's Parasol Protectorate and Scott Westerfeld's Leviathan trilogy continue to be of the highest calibre, the best release on audio this year for steampunk fans was Keith Roberts' Pavane. I don't consider the book steampunk per se, but as alternate history it fits both the inspirational antecedent for longtime steampunk fans, and must-read for new ones. These seven linked tales are a beautifully written (and narrated) alternate history where the Catholic Church still holds significant power in the 20th century: electric power is outlawed in a neo-Medieval Britain, but a Reformation of sorts is in the offing. Pavane is set for print re-release as well, and I'll review it properly when that comes out. In the meantime, check it out on audio.

Best Re-Release: While it was certainly a boon for the steampunk reader to have K.W. Jeter's seminal Morlock Night and Infernal Devices available from Angry Robot, Kim Newman's Anno Dracula from Titan Books is by far a superior work. Arguably, it works with less of the steampunk aesthetic in the area of technofantasy than Jeter's works do, but makes up for this lack with loads of social retrofuturism and dark neo-Victorianism. At the very least, we can say it's a book steampunks will love, and I can't recommend it enough.

Sheer Panache: Lev AC Rosen's All Men of Genius, for the audacity of playing in Shakespeare and Wilde's sandboxes and largely getting away with it.

Best Steampunk Memory: Meeting and hanging out with Gary Gianni at Steamcon. When I picture myself sitting at my sister's dining room table slaving over a term paper on Captain Nemo, I know that guy hasn't a clue how many cool experiences are lying ahead in the next three years. I gave up on getting to know the big celebs in my first year of convention travels, being content with making friends rather than being a fanboy. So I was pleasantly surprised to hit it off with Gary at the Steamcon Airship Awards banquet, and get some really fantastic opportunities to hang out and talk Conan, Doc Savage, Verne, and many other shared interests. It was like an early Christmas present.

A Happy New Year to my readers: I look forward to a leisurely stroll beside and inside the Nautilus in the new year, as well as looking back on two and a half years in Gail Carriger's wonderful Parasol Protectorate series. And, God willing and my schedule permitting, I'll see the end of the five year mission in the fourth year.